WFT of the Day: An Australian Artist Put an Ear in HIs Arm Because Art 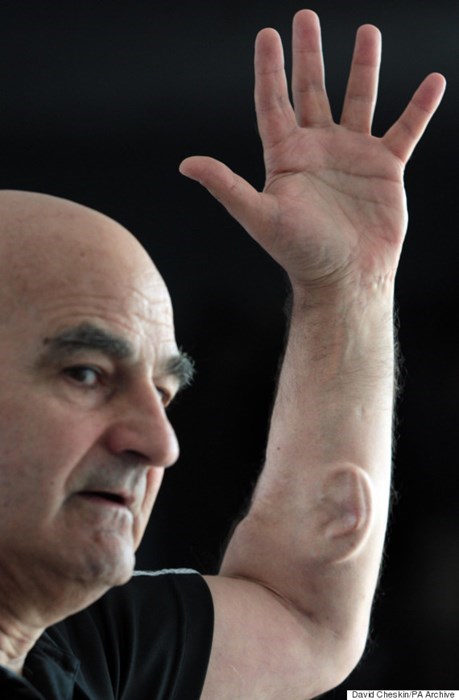 Australian professor and artist Stelarc wants the world to hear him. He just has an unorthodox plan to get there.

The head of the Alternate Anatomies Laboratory at Curtin University is in the process of growing a human ear under his left arm, from a bio-polymer scaffold implanted there.

ABC plots the route of this project from conception to implant.

Stelarc first conceived the idea in 1996, but it took another decade to find the medical team willing to make it a reality.

They were recruited from around the world to insert a scaffold underneath his skin.

Within six months, tissue and blood vessels had developed around the structure.

"The ear is pretty much now a part of my arm, it's fixed to my arm and it has its own blood supply," he said.

The next step is to make the ear more three-dimensional — lifting it up off the arm and growing an ear lobe from Stelarc's stem cells.


After that, Stelarc wants to implant a microphone, recording all that happens around him as if it were a functioning ear. He wants anyone to have access to the live audio via Internet.

"There won't be an on-off switch," Stelarc told ABC. "If I'm not in a wi-fi hotspot or I switch off my home modem, then perhaps I'll be offline, but the idea actually is to try to keep the ear online all the time."