Trailer of the Day: Here's that Fuller House Season Two Trailer You Just Had to Have

Fuller House, the Full House reunion series that you just had to have, premiered a mere nine months ago, and today, Netflix has released the trailer for the follow-up. That's right, Fuller House will be returning for another round of family-friendly high jinks on December 9.

All your favorites are returning: Stephanie, DJ, Kimmy, and Danny, sporting a new, funky midlife crisis. So if you've been missing the milkman, the paperboy, and/or the evening TV, Fuller House is back because, let's face it, you just had to have this.

Just in time for the holidays, Fuller House season two will drop all at once on December 9, so be sure to carve out some time in your busy holiday schedule to binge on what might be Netflix's most popular show. No, seriously, Fuller House season one brought in over 14-million viewers, which is more eyes on the screen than Game of Thrones or Walking Dead. Yup, an estimated 14.4 million people just had to have this thing, and because of that, we're all getting more.

Just goes to show you, most people just want some light situational comedy, not humans being hacked to death. Go figure.

Get Ready to Be Hit With Nostalgia, the Fuller House Trailer is Filled With Images of Your Favorite Childhood Home and Catchphrases

Via Netflix US & Canada
Repost
Recaption

Netflix just released a trailer for Fuller House including a release date of February 26th.

The video description includes a synopsis for the new series:

The Full House adventures continue when D.J. Tanner-Fuller calls upon her sister, Stephanie, and her friend, Kimmy, to move in and help raise her three boys.

Most of your favorite characters (but not the Olsen twins) from the original Full House are returning. In this trailer we get to see a glimpse of the old home and hear familiar voices and new ones utter catch phrases you probably thought you'd never hear again. Who knows why the house is pristinely arranged just as we remember it after all that time, or how long that puppy has been living alone in an empty house. 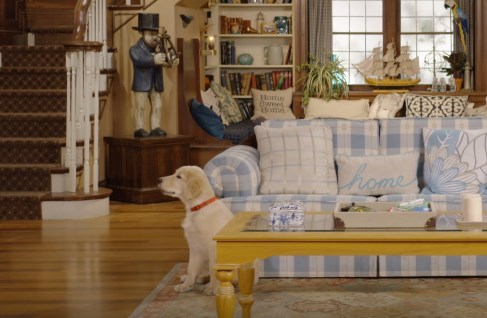 The important thing is, they're back! And we'll all be able to binge watch the series before February is over.