First World Problem of the Day 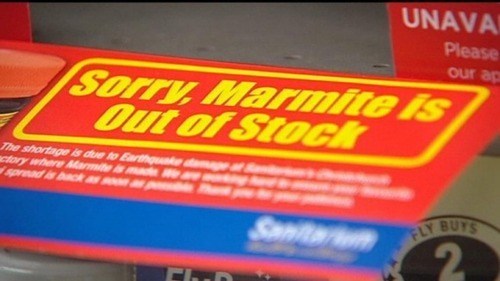 First World Problem of the Day: A widespread shortage of popular toast spread Marmite has sent New Zealanders scurrying to find the last remaining containers in a bout of frenzy nicknamed by the press "Marmageddon."

Sanitarium, the snack's manufacturer, was forced to shut down Marmite production last year after its factory in Christchurch was damaged in the earthquake and deemed unsafe.

Since then, supplies have dwindled, and are expected to officially run out next week. Kiwis are reportedly panic-buying the stuff by the crate-load, and exploiters are turning to online auction sites to sell jars at prices hundreds of times the MSRP.

New Zealand prime minister John Key, concerned over the prospect of emptying out his private stash, angered some when he said the shortage may force him to turn to Vegemite, considered by many to be an "inferior" Australian alternative.

Sanitarium, meanwhile, hopes to have production up and running against by July.