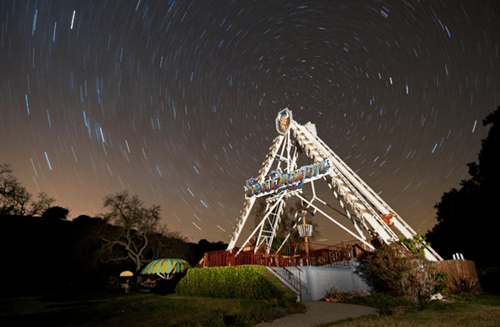 In 2005, Michael Jackson declared he would never return to his beloved Neverland because he felt violated by the police searches that had taken place there after he was accused of child abuse. In 2008, the theme park and its attractions were dismantled and sold. But not before intrepid photographer Scott Haefner and his friend Jonathan Haebe hatched a plan to sneak inside and capture the abandoned grounds on camera "before it was too late."

"I loved wandering around and photographing the rides at night," Haefner says of the visit. "After visiting Neverland, I have a strong sense that Michael was innocent of the charges that were filed against him. I don't have anything tangible to base my feelings on. I think he was just deeply misunderstood, unfortunately."