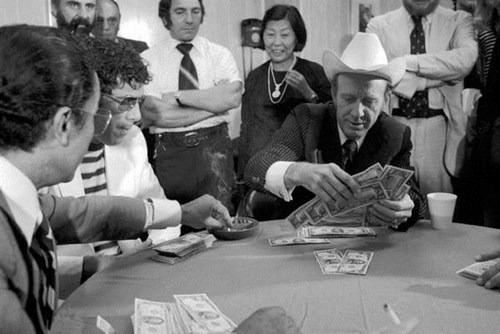 Amarillo Slim, who won the World Series of Poker in 1972 and went on to become an international living legend in poker circles, died Sunday of colon cancer.

Considered poker's first celebrity after his world title win, Slim made the rounds of the late shows to promote the game -- and himself. He was infinitely quotable: "Look around the table. If you don't see a sucker, get up, because you're the sucker." Slim authored several books, including "Amarillo Slim's Play Poker to Win" and "Amarillo Slim in a World Full of Fat People: The Memoirs of the Greatest Gambler Who Ever Lived." Slim was inducted into the Poker Hall of Fame in 1992.

"He brought poker out of the back alleys," said Larry Grossman, a longtime gaming analyst and poker historian. "He was just a guy with an outsized personality, and he was the perfect person for the time to represent poker. It was really Slim that became the face of poker for middle America."