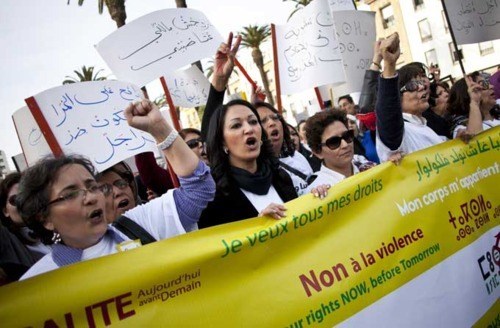 This Is All Kinds Of Wrong of the Day: Calls for the reform of Morocco's penal code were sparked over the weekend as news spread of a teenage girl who had committed suicide after being compelled to marry her rapist.

In Morocco, a rapist can "opt out" of a prison term by marrying his victim, so long as the victim and their family agree. Despite this clause, many say victims are often strong-armed into marriages they want no part of.

16-year-old Amina Filali's father, Lahcen, blamed the marriage on pressure from the courts. "The prosecutor advised my daughter to marry," he told the online news site goud.ma. "He said: 'Go and make the marriage contract'."

According to Amina's mother, the girl complained on more than one occasion that her husband/rapist was beating her, but was advised to be patient. On Saturday, Amina could no longer take the abuse, and made the decision to end her own life by swallowing rat poison.

Moroccan woman, galvanized by Amina's tragic death, have taken to the streets and launched petitions to demand that criminal law be changed to make it explicit that rapists cannot be allowed to marry their victims.

Moroccan law is known for being relatively female-friendly, compared with the rest of North Africa. Despite this, nearly two-third of all Moroccan women experience violence in their lifetimes, and many attorneys are ignorant of recent pro-women reforms, such as the raising of the marriage age from 15 to 18.