White People of the Day: Whole Foods Sold a Jar of Water with Three Asparagus Stalks in It for $6 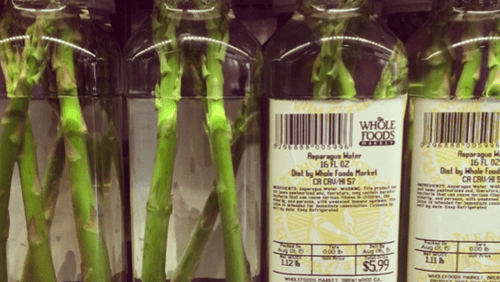 What began as an innocent bit of Instagram belligerence over asparagus water, turned into Internet gold this week. Marielle Wakim, an associate editor at Los Angeles magazine, uploaded the picture to social media with this comment: "Somewhere in L.A., Whole Foods executives are laughing at all of us."

Of course, the Internet tore it apart. Like it do.

for $5.99, that asparagus water from Whole Foods better be straight from God's tears

White people got some real nerve throwing some reject asparagus in tap water and trying to charge me a pack of cigarettes for them.

asparagus water: for the times u want ur pee to stink but dont want to go the trouble of chewing

"Asparagus water" just sounds like another name for pee

Only a day later, Whole Foods decided to pull the absurd product.

Whole Foods Market Senior Media Relations Specialist Liz Burkhart said "It was meant to be water with the essence of vegetables and/or mushrooms (similar to bone broth), which is typically made over a long period of time soaking in water. It was made incorrectly and has since been removed."

Of course, Gawker thought it was the American Dream.

Exploiting the poor has and will always be categorically wrong, but ripping off the rich and dumb—for whom uncooked asparagus is put in water bottles—is the American dream. Just like one cannot step in the same river twice or kick a dream, it's impossible to "exploit" the rich; they are the ones who exploit. They can, though, be ripped off and fleeced, and should be, as much as is possible and legal. Six dollar Whole Foods asparagus water is one such legal means of taking money away from people who have six dollars to spend on Whole Foods asparagus water and moving it somewhere else in the economy.