Augusta Fixes of the Day 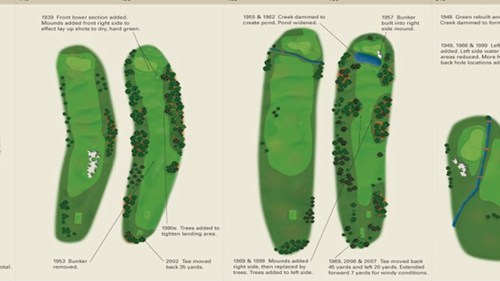 Golfers at the Masters this weekend face an Augusta National that has undergone quite the upgrade since its opening in 1934. The legendary course has adapted for advances in equipment technology -- including titanium and graphite clubs that allow even the worst golfers more distance off the tee -- with faster greens and increased hazards, particularly bunkers.

But the most widespread, and controversial, changes occurred from 1999-2006, when Augusta was "Tiger-proofed": tee shot landing areas were narrowed and a second cut of grass was added.

Bill Younker has detailed the redesign in this painstaking graphic, which can be had as a poster for $35.