Serendipity of the Day 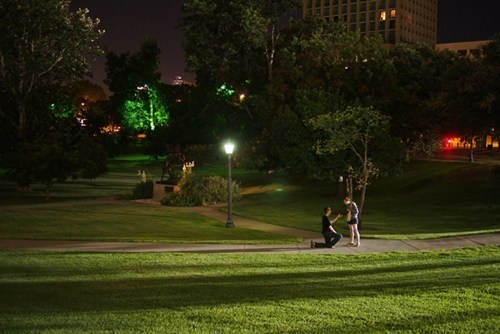 When photographer Patrick Lu noticed a man proposing to his girlfriend on the capital grounds in Austin, TX, he instinctively snapped a pic to capture the moment.

It turned out so well that the next morning, he threw the image up on Reddit to try and discover the identities of the mystery couple.

Lu's inquiry quickly made it to the top of /r/Austin with 1,400 up votes, but the groom-to-be, Joel Bush, caught wind of the thread through friends.

Bush, shocked, says he and fiancée Jennifer Orr are grateful:

We experienced that magic on its own terms, with no thought about posing or anything. And, because the photographer did such an awesome job, we also have that precise moment and her beautiful reaction captured for safekeeping. It's pretty priceless.