Secret Service Fail of the Day 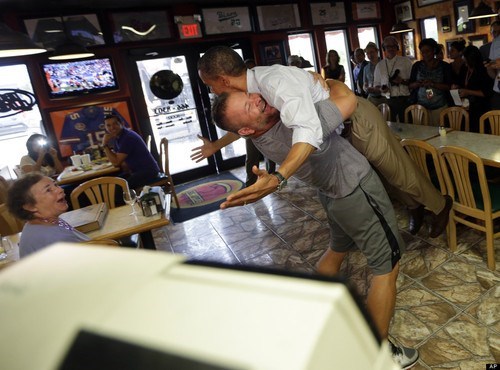 President Barack Obama's bus tour through Florida made a pizza stop in Ft. Pierce on Sunday. Upon meeting restaurant owner Scott Van Duzer, Obama exclaimed: "Scott, let me tell you, you are like the biggest pizza shop owner I've ever seen."

What happened next probably isn't on the Secret Service protocol sheet. Duzer wrapped Obama in a bear hug and lifted him into the air, much to the delight of onlookers -- and likely the chagrin of his security detail.

Duzer is a registered Republican who voted for Obama in 2008, and plans to do so again in November.

Hangover Cure of the Day

Las Vegas, possibly the hangover capital of the world, is now home to Hangover Heaven, a bus tour that offers a 45-minute intravenous hydration and vitamin treatment for $150. According to the website, everything is FDA approved. The website also warns: "Our buses can work magic, but they cannot bring you back from the dead."