We've seen innovations, both past, present, and potential future, that have completely changed the way mankind thought about a certain concept or issue. So without further ado, I give you the salmon cannon. That's right, if you have ever sat and thought, "How can I get my salmon over a massive dam without transplanting them. Well the people at Whooshh Innovations came up with an amazing solution to how to move salmon, and also help the salmon, especially considering it could take them an entire day before the system to move the fish, and now it takes just seconds. 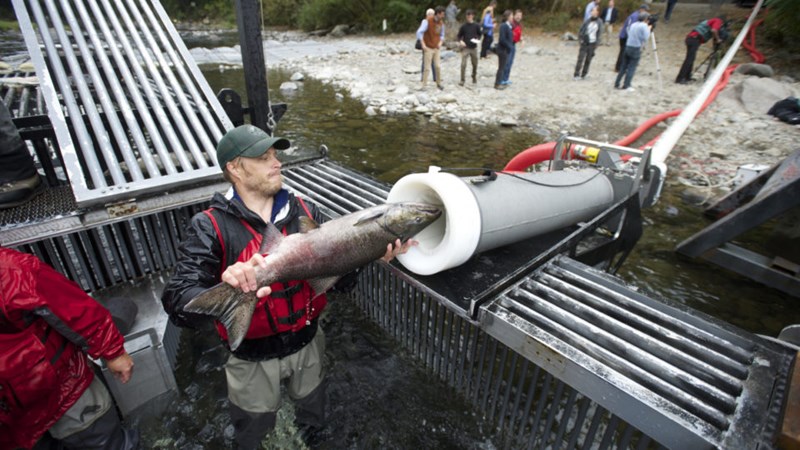 The Salmon Cannon: Catapulting Fish and People's Dreams Into The Future

Humans have interrupted a lot of natural processes. Highways divide forests, and dams interrupt the migration routes for fish. But that isn't to say that we haven't found solutions to some of the problems that we created. Wildlife bridges have been built over highways allow animals to cross the highway safely. And in a recent Twitter storm, the public has rediscovered an amazing apparatus that scientists released in 2014 which helps salmon migrate. It is called the Salmon Cannon. And as you can imagine, everyone is obsessed with it.

To-Do of the Day: Shoot a GoPro Out of a Cannon

Via Sam and Niko
Repost
Recaption

We are vastly underestimating the GoPro.

While most of YouTube spends their time sticking these little marvels on drones and floating them over an abandoned theme park or something, these YouTubers are discovering what these cameras are made for: Shooting them out of a cannon.

Sorry, Harold, they aren't made for attaching them to trombones. They're made for shooting them out of a cannon.

I know that you might think that GoPros are better for taking vacation footage or exploring the ocean deep or just getting some cool B-Roll, but trust me, it’s true purpose is shooting them out of a cannon. Just think of it, all the fun of being a circus sideshow freak without any of the danger. It’s the American dream.

YouTubers Sam and Niko explain how it was done in the description.

Potato Cannon we used was built with PVC pipes. We basically went to Home Depot and assembled all the pieces before buying them. It's filled using an air compressor through a nozzle that's tapped into the end of the air chamber. The gun's worked great for the decade or so we've had it!

It's a Time-Honored Tradition in Poland to Make a Homemade Cannon for Easter. Let's See How That Goes.