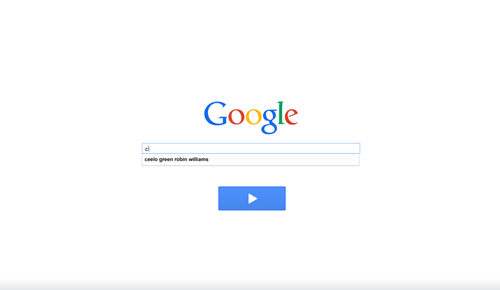 Don't bother Googling for Cee Lo Green's new single. He did all that work for you.

The longtime singer/rapper/the Voice judge released his newest single off this fall's upcoming record Heart Blanche July 17 through an innovative video over at Mashable.

The song, entitled Robin Williams, is an infectious tune filled with beat boxing and slight melancholy, wherein Green invites you to "laugh the pain away."

What makes the video so interesting is that ever lyric, including the "ooh"s, gets plugged into Google, showing the instant results.

If only we all had Internet connections that fast...

It's been three years since Cee Lo Green released his 2012 Christmas album Magic Moment and he's been under fire for a police investigation and questionable things he said about sexual assault.

His previous album Lady Killer (terrible title for someone under investigation for assault...) built some great music on top of classic Motown arrangements.

If Robin Williams is any indication, his next album might just hit those heights as well.