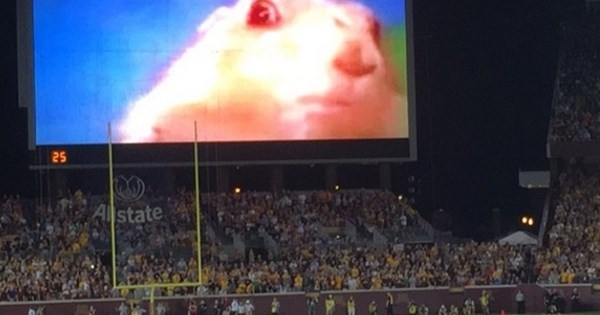 
The Minnesota Golden Gophers opened up their season by taking some extreme measures to make sure they came out on top against the No. 2-ranked Horned Frogs.

What was the team's secret? This very dramatic chipmunk.

Minnesota broadcast this classic meme on the jumbotron in an attempt to distract the TCU kicker during field goals.

Minnesota is using Dramatic Chipmunk to distract kickers & it's working! TCU is 1-2 on FG attempts. (via @jack_kiwi) pic.twitter.com/qGSqrbOBMb

Alas, Minnesota tried their sneaky chipmunk trick, but TCU ultimately came out on top with a 23-17 win.

Next game, Doge. Much football.

Admit it, you cried too.
This little girl gets teary-eyed in the backseat of the car over a scene from "The Chipmunk Adventure" when the Chipettes sing to a lost baby penguin.
But things get even more intense when, spoiler alert, the penguin finds its parents.