WTF of the Day: Someone in North Carolina is Going Around Dropping Raw Meat, Wearing a Cloak 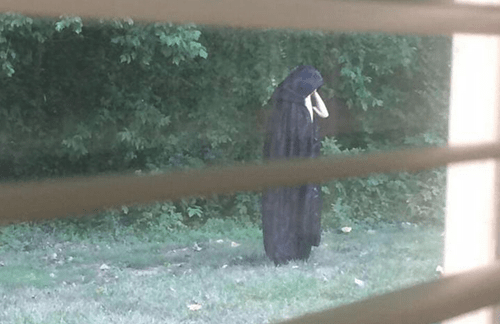 Police and residents in Bessemer City, North Carolina are trying to find more information about a cloaked, pale figure dropping raw meat around an apartment building.

This could very well be the result of some social media prank or over-hyped paranoia, but we just had to tell you about it.

The mystery at least as police on alert according to the Gaston Gazette:

Two pictures popped up on the Facebook group One Man's Junk Sunday night and Monday morning.

The photos are taken through a window with blinds in the foreground and a cloaked, pale person outside near some woods.

The social media chatter says the man or woman is in the Hudson Woods apartment complex off of Hudson Boulevard, but police say it hasn't been confirmed.

"There's no validation that it was Hudson Woods. It could have come from anywhere. We don't know if this is some bogus prank somebody is playing," said Donna Lahser, spokeswoman with the Gastonia PoliceDepartment.

...Many people accused the cloaked person of dropping raw meat near a playground in the apartment complex. One resident said her husband found a bag of raw meat near their apartment about two weeks ago. They called maintenance to have it removed.

A cloaked person reportedly dropped raw meat at a playground. Did you see it? Do you have more photos to share? pic.twitter.com/ThNfXYwMvi

Its unclear whether it's a man or a woman. It's unclear why someone would do something like this. And it's also unknown who took the original picture.

The reactions to this most-probably a hoax are almost as fun as the mystery itself.