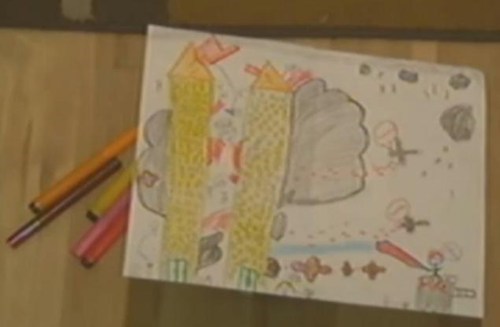 Oh, wow -- a school district in El Paso, TX, is investigating after a fourth grader reported to mom that her teacher forced the class to draw graphic images of the September 11 attack on the World Trade Center.

"We had to draw the boom cloud and the planes hitting and people jumping out of windows," mom Ivie Gremillion said her daughter told her. "That's something that kids should get in trouble for drawing. That's people being murdered, people committing suicide."

The drawings depict stick figures falling from the burning buildings with speech bubbles that read "help" and "I love you."

Even worse, Gremillion's husband is headed to Afghanistan in the next few months, and she says her daughter is convinced he's going to die because the teacher said that "the Afghans did this because they hate all of us and they want to kill all of us."

The school district has apologized to parents and promises to resolve the matter asap.