Explosions in the Ground 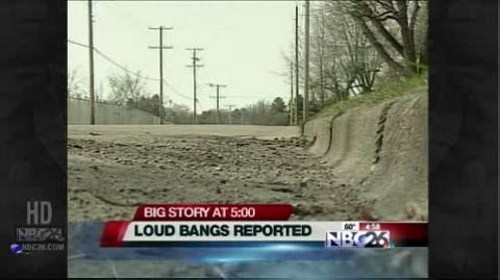 Has the mystery of Clintonville's bizarre booming sounds been solved? If scientists are to be believed, the cause of the noisy phenomenon is a "swarm of microquakes."

"The mystery is solved. We have experienced an earthquake here in Clintonville," City Administrator Lisa Kuss told residents at a city meeting last night. The USGS backed up its "claim" with "evidence" showing that a 1.5 magnitude earthquake struck the central Wisconsin city around noon on Tuesday.

Residents, who began hearing strange rumbles this past Sunday, challenged the city's explanation, saying quakes had previously been ruled out. Kuss admits that it was "by fluke" that the USGS's traveling portable arrays happened to be in the area when the tremors occurred.

For now, this is the best answer the city has to give, though officials acknowledge they aren't sure it's the only answer, so Graboids are very much still on the table.