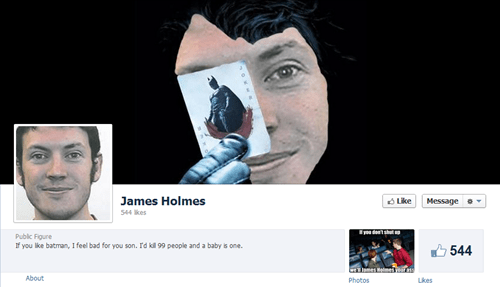 Since Friday's massacre at a Colorado movie theater that killed 12, a number of Facebook pages have popped up paying tribute to alleged shooter James Holmes.

The largest and most horrifying page, written as if by Holmes himself, was launched Friday, before many of the victims had even been identified. The frequent posts are intended to shock -- they mock the victims of the shooting, and one includes a Photoshopped image of Holmes receiving the Medal of Honor from President Obama.

Now, four days later, the page remains active, despite numerous requests to Facebook to shut it down:

The anonymous author of the fan page has commented on nearly every photo and is often ridiculing people who are expressing their disgust at the page that many have commented, "goes too far" and is "too soon." He also has posted a note that says the page has been reported numerous times to Facebook and "nothing has happened." It's not possible to tell how often or if the page has been flagged by other users, but it features comments from thousands of Facebook users who are calling for its deletion using profanity-laced language and threats to the faux Facebook Holmes.

The amount of comments against this kind of humor is actually a positive thing. I'm glad that although many people cannot spell or use grammar, they are still not as f**ked up as I thought Americans were. ♥ oh and whoever made this page needs to be sterilized.