get your ass to mars

Discovery of the Day: There's Liquid Water on Mars, Y'all 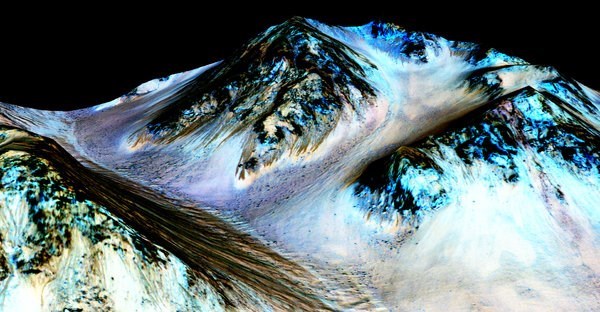 Well, Buzz Aldrin must be thirsty.

Though we've long known that Mars has ice, it was not yet strongly believed that liquid water could exist on the surface of the red planet. Well the newest evidence, released Sept. 28, points strongly to that possibility.

As reported by the New York Times:

In a paper published in the journal Nature Geoscience, Dr. McEwen and other scientists identified waterlogged molecules — salts of a type known as perchlorates — in readings from orbit.

"That's a direct detection of water in the form of hydration of salts," Dr. McEwen said. "There pretty much has to have been liquid water recently present to produce the hydrated salt."

Though young Mars was inundated by rivers, lakes and maybe even an ocean a few billion years ago, the modern moisture is modest. Scientists have long known that large amounts of water remain — but frozen solid in the polar ice caps. There have been fleeting hints of recent liquid water, like fresh-looking gullies, but none have proved convincing.

Liquid water on Mars has been theorized for a while, with many scientists pointing to dark streaks on the surface that would appear seasonally. This most recent evidence is validation for the theory that those streaks are rivers and streams of water.

So what does this mean?

It might ease the burden when considering Martian colonization, helping to grow plants and and food on the surface. With that it could also mean possibly helping to oxidize the atmosphere, which is currently mostly made up of carbon dioxide.

And The Verge sees it as a promise for extraterrestrial life:

[T]hat strengthens the possibility of finding microbial life on the Red Planet. The presence of liquid water on Earth is intimately linked with the formation of life, so the odds are better than ever that extraterrestrial organisms are nearby in our Solar System.

This is mind-blowing, eye-popping news.