Picture of the Day: Lightning and a Rainbow Finally Fight for Celestial Dominance 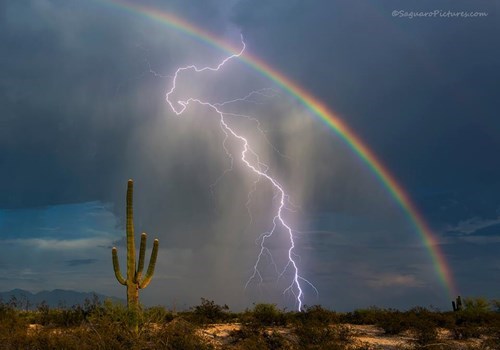 Photographer Greg McCown captured this incredible picture of a bolt of lighting streaking through a clear arcing rainbow.

Finally! After years of trying I finally got my lightning and rainbow picture. What an awesome evening. I headed out late afternoon, shot a little on the SE side, then drove across town catching up with Bryan Snider and Chris Frailey, two awesome photographers/stormchasers. We shot for a little while, then got dumped on by a microburst while driving up the freeway. I-10 slowed to a near crawl, with half the traffic pulling over and stopping completely. Can't blame them as visibility dropped to 20 feet. At the next stop Bryan and Chris headed NW back towards home and I headed SE towards this rainbow. I was just trying to find a foreground without telephone poles or other junk in the way. Found it just in time as this was the last bolt to strike before the storm dissipated into nothing.

It's certainly not the only pretty picture McCown has taken. You can see a whole lot of beautiful shots on his website.