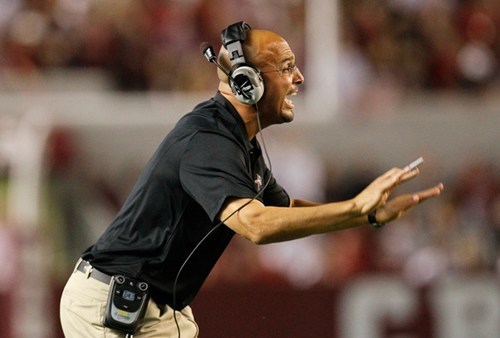 Vanderbilt head football coach James Franklin said in an interview Wednesday that the appearance of coaches' wives factors into the interview process:

I've been saying it for a long time, I will not hire an assistant coach until I've seen his wife. If she looks the part, and she's a D-1 recruit, then you got a chance to get hired. That's part of the deal.

There's a very strong correlation between having the confidence, going up and talking to a women, and being quick on your feet and having some personality and confidence and being fun and articulate, than it is walking into a high school and recruiting a kid and selling him.

Franklin took to Twitter today after his comments made the rounds: "My foot doesn't taste good, I hope I did not offend any1, I love & respect ALL,have a great day, enjoy the fam & don't forget 2 #AnchorDown"