Follow-Up of the Day: There's More to the Story of the Anti-Gay Ranter 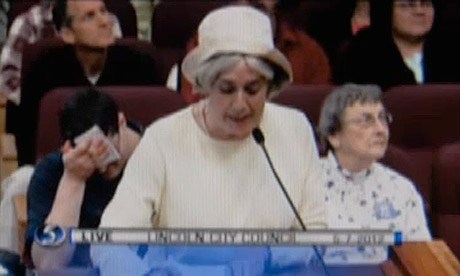 Jane Svoboda, whose anti-gay rant at a Lincoln, NE, City Council meeting went viral last week, isn't the crazy conservative she's been made out to be in the media, but a schizophrenic who lives at an assisted-living facility, says her family.

Svoboda is listed as a protected person, according to court documents, and her brother, Patrick Svoboda, is her conservator because she is incompetent. He said their family has tried to get her help multiple times, but there's little they can do unless she becomes a danger to herself or others.

He said he's disappointed that the video was so widely shared when people didn't know his sister's back story.

"To me, it shows how little society really cares about people with mental health issues," Patrick Svoboda said. "She does have a very tender heart... but anything she says is certifiably schizophrenic ... she's not some crazy conservative."

Nonetheless, Jane Svoboda is a registered lobbyist at the Capitol, and she usually speaks twice a month during the council's open mic sessions. She also frequents the University of Nebraska-Lincoln campus, where she hands out fliers and is known as the "Crazy Blue Protesting Lady."

Meltdown of the Day: Amy's Baking Company Founder Samy Bouzaglo, From "Kitchen Nightmares" Fame, Attacks a Patron With a Knife