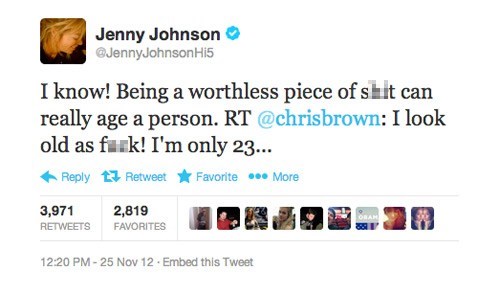 R&B singer Chris Brown apparently shut down his Twitter account last night after getting involved in a heated exchange with Houston-based comedian Jenny Johnson. The feud began when Johnson took a snappy jab at Brown's one of many self-obsessive, worthless remarks (shown left) about his aging look, provoking a series of embarrassingly inarticulate tirades from the hotheaded 23-year-old singer and his Twitter fanbase #TeamBreezy. Head over to BetaBeat for more details on this exchange.