Kept Kitty of the Day 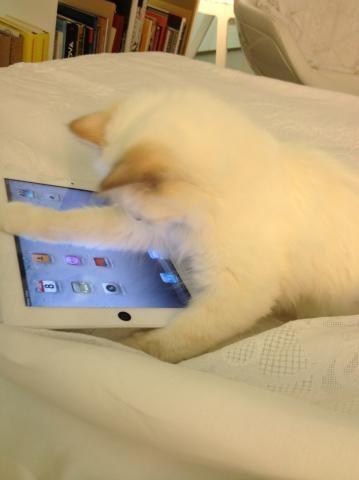 Karl Lagerfeld recently sat for leading fashion rag Women's Wear Daily, and the resulting interview is notable less for the Chanel designer's style insights than his revelation that he is obsessed with a friend's 9-month-old kitten that he refused to return after caring for her over Christmas -- "I thought she was too cute."

According to the Los Angeles Times:

Choupette dines with Lagerfeld for lunch and dinner ("She doesn't want to eat on the floor," he noted). She knows her way around an iPad. And she has two "personal maids" who cater to her every whim "both night and day," he said. "She is beyond spoiled." If you're scratching your head wondering what the two kitten minders do all day, Lagerfeld goes on to explain: "We do keep a diary. When I am not there, the maids take down, in little books, everything she did, from what she ate, to how she behaved, if she was tired, and if she wasn't sleeping," he said. "In the nine months, we already have almost 600 pages." "I think it could be funny to make a little book of Choupette's diary," he added.