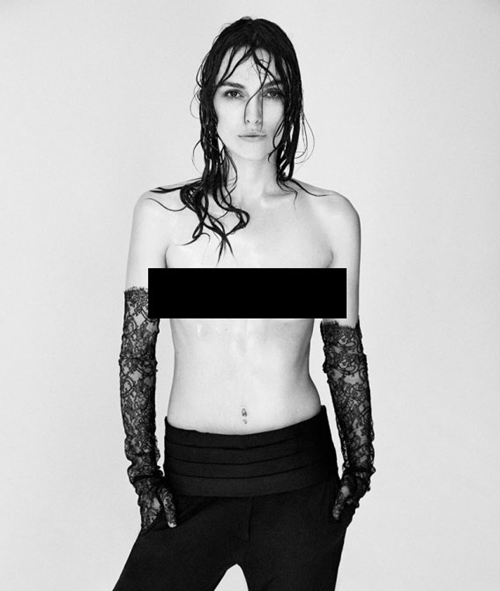 We live in a world where "thigh gap" is a thing and cringe-worthy airbrush disasters are a frequent phenomenon.
Keira Knightley is making headlines this week - not only for her new movie, "The Imitation Game," with off-the-market-Benedict Cumberbatch - but for tackling this problem we have with body image and digital manipulation.
Actress Keira Knightley recently posed topless in a photo shoot with Interview Magazine, to protest photoshopping images, and she demanded the photos be untouched to help make her statement.
"I've had my body manipulated so many different times for so many different reasons, whether it's paparazzi photographers or for film posters," Knightley said. "That [shoot] was one of the ones where I said: 'OK, I'm fine doing the topless shot so long as you don't make them any bigger or retouch.' Because it does feel important to say it really doesn't matter what shape you are."
Knightley's chest was digitally enhanced in the controversial 2004 film poster for "King Arthur" as shown in photos here.
In 2012 she also posed topless in Allure and told the Daily Mail that she doesn't mind doing it "because they're so small - people really aren't that interested!"
"I think women's bodies are a battleground and photography is partly to blame," she told The Times. "Our society is so photographic now, it becomes more difficult to see all of those different varieties of shape."