Protest of the Day: Tens of Thousands Turn Out to Oppose 500-Year-Old Spanish Bull Killing Festival 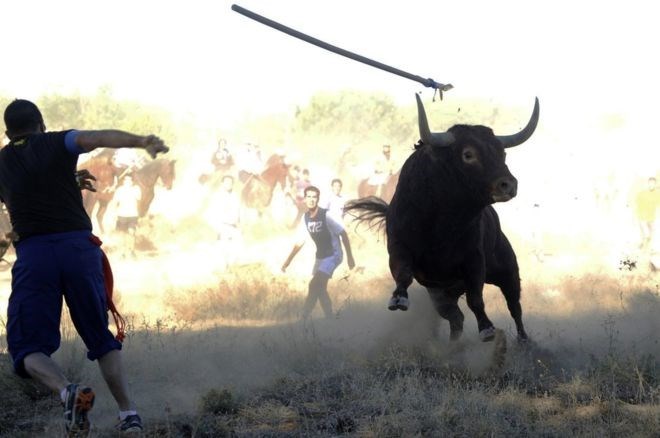 Tens of thousands rallied to the Sol Square in Madrid to protest Sept. 15's Toro de la Vega festival, wherein local men chase down a bull and hurl spears at it until its dead. Why would anyone have a problem with that?

If you can believe it, the festival is said to have begun in 1534. Without Internet, television and probably a largely illiterate population, chasing down a bull would probably seem like some pretty stellar entertainment.

The BBC describes the proceedings even futher:

The Toro de la Vega festival is unique in that after the bull is run through the town, chasing daredevil participants through the streets in a similar fashion to Pamplona's famous San Fermin event, the beast is not fought by professional matadors in a ring.

Instead, all comers battle for the honour of killing the animal out in the open plain, some on horseback, others on foot. The winner of the tournament trophy is the one who lands the mortal wound on the bull, bringing it to its knees before an accredited expert deals a coup de grace to the animal's neck.

Supporters of the nearly 500-year-old tradition say it is the purest of battles between man and bull, pointing to strict rules against wounding the animal from the side or attacking in numbers rather than one by one.

But of course, this festival is seen as an act of barbarism by many in Spain and abroad. It sparked large protests last year with accusations of assault on both sides of the issue — not including those four injured by the chased bull. 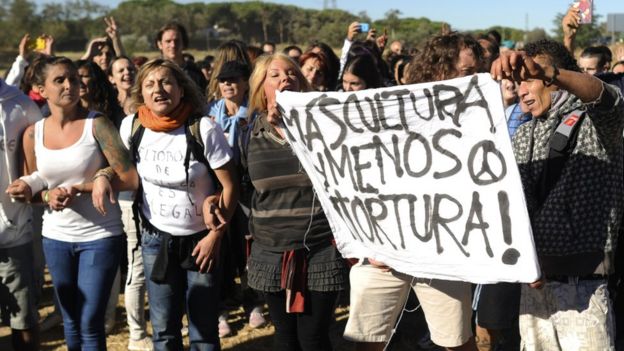 And then this year, the protests swelled and erupted on social media as well:

If you don't know "The Toro de la Vega" it's were a bunch of cretins with spears stab a toro over and over again until it finally dies.

Despite thousands protesting against abuse, the next victim of the Toro de la Vega is set to be killed tomorrow. pic.twitter.com/Spt2fectXX

It could be a sign of ever-more divisive political sides, raising ethical consciousness or the outrage over Cecil the Lion has found a new target.

Whatever it is, there won't be a happy ending for that bull this year.