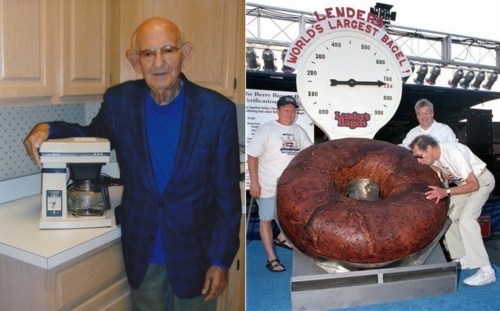 Sad news for breakfast lovers everywhere: Murray Lender, a bagel pioneer who was instrumental in popularizing the beloved bread product, passed away yesterday in Florida at 81.

Through Lender's Bagels, the company he and his brothers inherited from their father Harry, Lender helped transform American eating habits by freezing the company's first-in-the-nation bag o' bagels, allowing it to be sold nationwide.

In addition to Lender, this month also saw the passing of Samuel L. Glazer, the man who co-founded the company that developed the iconic automatic drip-brew coffeemaker, Mr. Coffee.

Glazer was 89 when he passed Monday, March 12th, in Cleveland.

According to the Plain Dealer, at one point half the homes in the US with coffeemakers had a Mr. Coffee brand machine.

Glazer developed a lifelong love of giving friends business advice and coffeemakers. One of his friends, Johnny Carson, after being gifted one too many Mr. Coffees, is quoted as having told him, "Please, Sam, no more coffee machines!"