Nope of the Day: Don't Mess with These Thousands of Texan Spiders Who Teamed Up to Spin This Mega-Web 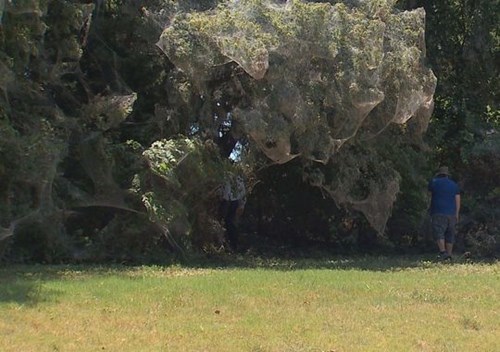 Thousands of spiders have teamed up in Rowlett, Texas to create a Mega-web. And that's really the scientific term used to describe this disgusting phenomenon.

Agrilife.com talked to entomologist Mike Merchant about this horror show:

"Someone stepping off the road for a closer look will see thousands of lanky spiders darting among the webs that extend up to 40 feet into the trees," he said. "There is a surreal quality to the extensive webbing covering these trees."

"[I]t is rare to see them building such large nests in the U.S. Spider experts have indicated that those 'right conditions' appear to include a glut of small insects like midges that emerge at night from lakes. Without lots of food, these communal webs just don't seem to form."

"These types of spiders are unusual in that they are not aggressive to other spiders of the same species on the same web," he said. "They also are not known to bite or be harmful to humans."

Local station WFAA also reported on the spillage of nightmare fuel, saying that it is many different species of spiders that make up the monstrosity which will haunt your dreams into eternity.

Something like millions of mosquitos, flies and other spider food is supposed to be the cause of this cataclysm and now that they've gotten the taste for teamwork, probably nothing will stop them ever.

You just know this is a bad graphic to see on the nightly news: Here's the local footage of God's latest joke on humanity: