Pope Francis has left America behind, but surely he will not soon forget his six-day visit to America.

Washington D.C., New York and Philadelphia all got a chance to glimpse the Pontiff.

He was put on a pizza and recreated in dog form and even used to troll NYC.

He also made resigning Speaker of the House John Boehner cry.

But possibly nothing could prepare him for coming big hat to big hat with a baby dressed up in the robes of the supreme Holy See.

Honorific of the Day: Twitter Welcomes the Pope to America by Making Emojis for Him 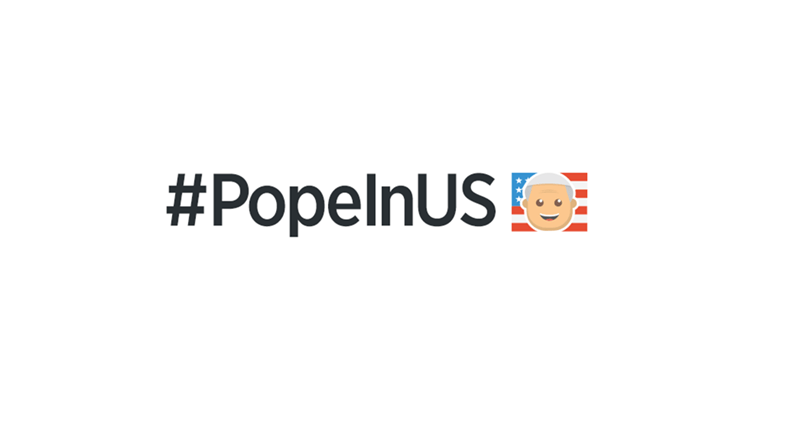 Just ahead of Pope Francis' first visit to America, Twitter rolled out some new emojis to welcome the leader of the Catholic church.

The social media company explained the new emojis in a blog post.

As Pope Francis (@Pontifex) makes his historic journey to the US, there will undoubtedly be excitement and celebration surrounding his arrival – both in the cities he visits, and on Twitter. Considering the warm Twitter welcome he received shortly after being named Pope, we anticipate many devotees will flock to Twitter to savor his visit.

No matter where you are, we want to make it easy for you to follow right along with his journey. We also wanted to offer a bit of fun to the proceedings, so today you'll start to see special Twitter Emojis that celebrate his historic visit to the US. To see the emojis appended to the end of the hashtag, simply Tweet your messages using these hashtags:

And others have joined as he arrived.

Not even Catholic and I'm excited for #PopeinUS lol

I'm not religious - but the #PopeinUS is quite something. This Pope is really breaking the stereotype - I really respect that!

Welcome to America, Your Popiness!