Ultimatum of the Day 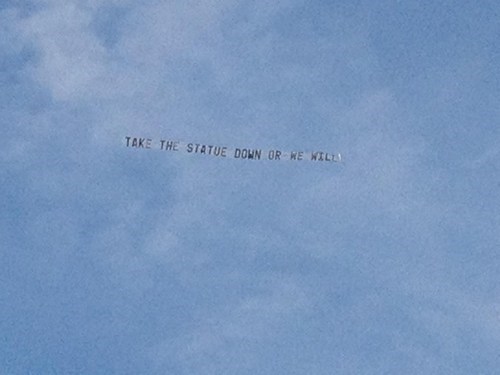 Debate has raged for months over whether the Joe Paterno statue outside Penn State's Beaver Stadium should remain in the wake of increasingly damning revelations in the Sandusky abuse scandal.

Now, just days after an independent report implicated Paterno in a high-level cover-up, a plane is flying above the university trailing a banner that threatens "TAKE THE STATUE DOWN OR WE WILL."

No word on who "We" might be, or how soon the statue must be removed before "We" return with an excavator.

However, this has the potential to get interesting: The Penn State Board of Trustees issued a statement Sunday claiming that no decision had been made on whether the statue would be removed, and that a decision shouldn't be expected anytime soon.

Actor Albert Brooks is no stranger to Twitter-related controversy, so it shouldn't come as a surprise that he'd have something to say after Thursday's release of the Freeh report.

The damning report implicates Penn State's "Big Four" in failing to report on Jerry Sandusky's conduct, going as far as to say they "never demonstrated... any concern for the safety and well-being of Sandusky's victims."

While Brooks didn't actually come up with the aptly worded Joe Paterno burn (a response to calls for Paterno's statue at Penn State to come down), it still carries significant weight in that takes a potshot at the man whose once-golden reputation has been obliterated in recent months.