Sarah Silverman Has a Ballsy Idea for Closing the Pay Gap... Become a Dude

Disclaimer: Sarah shops around for male genitalia so this video is not safe for work.

The campaign aims to close the wage gap by crowd funding an admittedly ludicrous number: $29,811,746,430,000. That number represents how much women lose when each of the US's 69 million female workers are paid nearly $500,000 less than men over their working careers.

The money raised from the Equal Payback Project will go towards funding the National Women's Law Center – a non-profit that works against employment discrimination and focuses on legislative issues to promote gender equality.

Aziz Ansari puts being a feminist in even simpler terms with his perfect analogy a little after two minutes in on this appearance on David Letterman.

Sarah Silverman Takes On Voter ID Laws of the Day

Decent Proposal of the Day

It's an election year, which means Sarah Silverman is one-upping her "Great Schlep" of 2008 with a $100 million proposition for a top Romney donor.

Abortion Joke of the Day 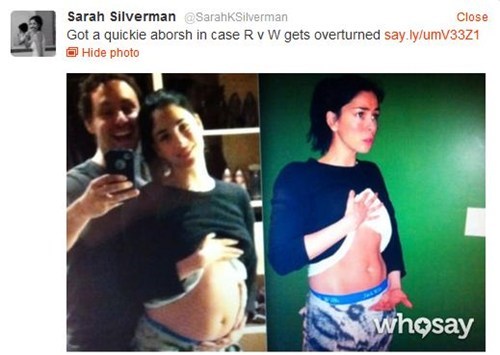 Sarah Silverman has joined the fight against the GOP's ongoing "War on Women," posting (obviously fake) before-and-after abortion pics on Twitter. Inappropriate? Nah. Point made, and made well.

Spider of the Day: See a Giant Spider About to Devour This Lizard