Oh Sweet Irony of the Day 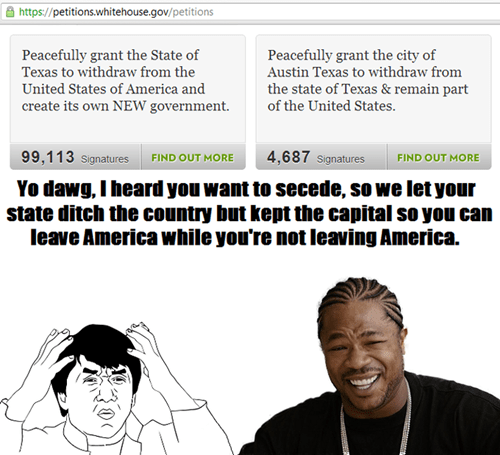 The online buzz over the recent trend of U.S. Secession Petitions continues with facetious counter-petitions seeking to secede from the secession movement and deport or exile those who wish to quit the Union before they can secede.

Online Petition of the Day: Pizza Party for Every American

You've probably heard by now that residents of at least 20 U.S. states have submitted petitions to the White House's "We the People" website in an attempt to secede from the Union. Largely initiated by bitter conservatives in reaction to President Obama's re-election last week, the "secession movement" is already turning into a self-parody phenomenon with far-fetched petitions like Justice for Missouri Secession, which demands that the Obama administration grant a pizza party for every remaining U.S. citizen.