Sneakers of the Day [UPDATED] 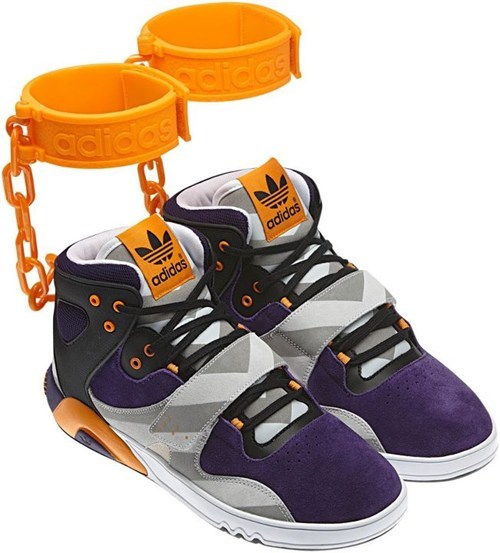 Adidas is trying to quell an international sh*tstorm after pics of its new JS Roundhouse Mids sneakers were posted to Facebook late last week. "Got a sneaker game so hot you lock your kicks to your ankles?" asks the tagline.

Facebook commenters accused the shoes of being offensive to African-Americans because the shackles evoke imagery of slavery.

"Adidas, you should be ashamed of yourselves. The mockery of oppression that has not been overcome," one Facebook user wrote.

"Slavery isn't a fashion example," said another. "Everyone involved in this show should be fired ASAP! This is the new reason I won't buy any Adidas anymore!"

A spokeswoman for Adidas responded with a statement: "Jeremy Scott is renowned as a designer whose style is quirky and lighthearted and his previous shoe designs for Adidas Originals have, for example, included panda heads and Mickey Mouse. Any suggestion that this is linked to slavery is untruthful."

The shoes are due out in August.

UPDATE: Aaaand, the JS Roundhouse Mids have been canceled.