Tara is Best Human of the Day

Cutest-kid-ever Greyson Arroyo-Smiley is battling brain cancer. He also happens to be a huge My Little Pony fan, which is why this visit from voice actor/executive producer Tara Strong is a dream come true.

After helping read off some raffle winners, Greyson got a pretty big surprise. That was a class act, Bronies. 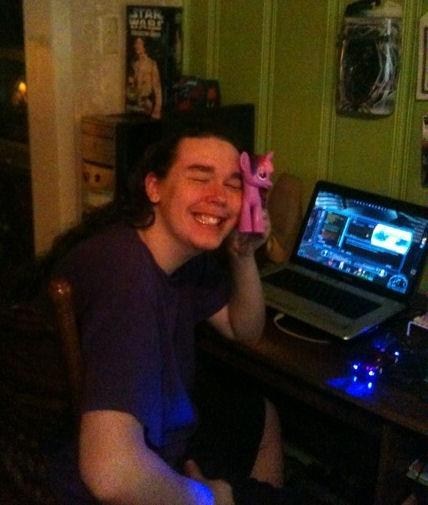 My Little Pony voice actress Tara Strong was scheduled to appear at the upcoming Knoxville Comic and Anime Show, and 15-year-old mentally disabled brony Dragon and his mom, Rebecca Andrews, were looking forward to meeting her.

Andrews knew her son would be devastated, and she said as much on the convention's Facebook page: "Thanks for posting. Just wish she'd cancelled before I paid for the vip pass. Now I have to figure out how to tell my disabled son he won't be meeting Twilight. :("

But Strong saw the post, called Andrews, and set up a phone call with Dragon.

Tara: Is this Dragon? Dragon: ...yes. Tara: Do you know who this is? Dragon: Yes, it's Twilight Sparkle. Dragon: Tara, you are so talented with all those voices you do. Tara: Yes, yes I am, aren't I? Tara: (in Twilight's voice) I love you, Dragon. Dragon: (stunned, muttering) ...love you, too, Twilight.

After the call, Andrews snapped a pic of Dragon's expression and posted it to Facebook.

"She talked to him for about 20 minutes in all," Andrews wrote. "[She] did every voice he asked her to do, talked a little to him about how to deal with bullies at school, and assured him that there is going to be a season 3 of My Little Pony."

Dragon starts high school in the fall. He recently was switched to special needs classes so he won't be subjected to bullying for liking My Little Pony.

"It's still rather hard to believe this actually happened," Andrews said, "even with Dragon piping up every once in a while, 'Twilight Sparkle said she loved me.'"