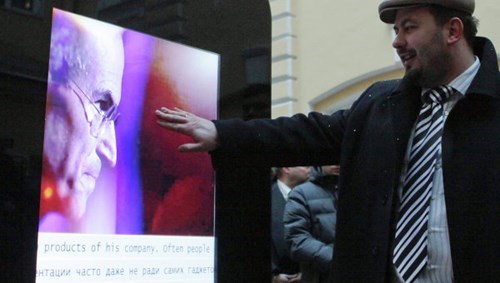 Following Tim Cook's public announcement that he is gay, a Steve Jobs memorial in St. Petersburg has been dismantled by ZEFS, the group that commissioned it, claiming that it is now considered "gay propaganda."

"After Apple CEO Tim Cook publicly called for sodomy, the monument was taken down to abide to the Russian federal law protecting children from information promoting denial of traditional family values," the group said in a statement.

The interactive memorial was erected in January 2013, to honor Jobs, who died in October 2011.

The director of ZEFS also said that Edward Snowden leaks about the NSA using Apple products to spy on people were also a factor in this decision, according to Vocativ.

Apple News of the Day: CEO Tim Cook Comes Out as Gay

Apple CEO Tim Cook is making headlines Thursday, and not because of a new Apple Watch, iPhone or iPad. In a column for Bloomerg Businessweek, Cook has come out to the public as a gay man.

"While I have never denied my sexuality, I haven't publicly acknowledged it either, until now. So let me be clear: I'm proud to be gay, and I consider being gay among the greatest gifts God has given me."

He admits that many of his colleagues already knew, and he has not been silent in the past about speaking up publicly on discrimination.

He also says that privacy is a big issue for him, but "if hearing that the CEO of Apple is gay can help someone struggling to come to terms with who he or she is, or bring comfort to anyone who feels alone, or inspire people to insist on their equality, then it's worth the trade-off with my own privacy."

Considering the fact that your guest presenter just got finished saying that every CEO he interviewed declined to discuss their sexuality for his book because of the fear of negative backlash, I'd say "yeah, that was an error."