Perfectly Timed Photo of the Day: Lightning Steals the Thunder During Fireworks 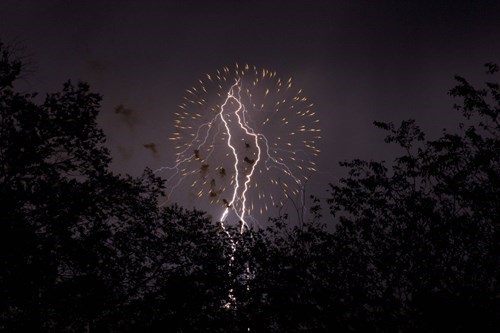 Redditor AJ192 took this spectacular photograph of a lightning in the middle of a fireworks show at Balloon Fiesta Park in Rio Rancho, New Mexico.

Photo Fad of the Day: Tuba Gunning is the New Hadoukening in Japan

Japan's latest trending photo fad turns musical instruments into powerful air blasting weapons. Coming off the heels of the Hadoukening (better known as "Makankosappo" in Japan) pics that went viral in March, Japanese band students are tweeting photographs of themselves while in mid-leap as if they're getting blasted away by large brass "tuba guns" (or natively known as "chuuba juu"). While tubas seem to be the most popular choice of instrument for this fad, trumpets, cymbals and other musical instruments have entered the fray as well.