Chart of the Day

Everybody Needs A Hobby of the Day 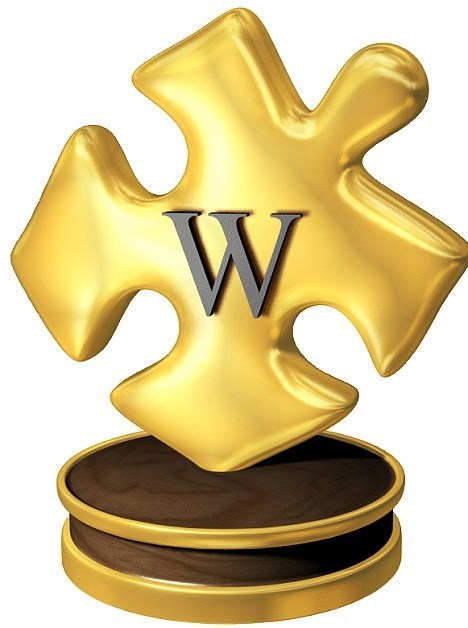 One man, 1,000,000 edits: Justin Knapp, a 30-year-old Wikipedia editor from Indiana, has spent the bulk of his free time since 2003 giving the open-source encyclopedia the ol' spit-and-polish, and he's finally hit seven digits. And that's easier said than done, considering the site is the sixth most-visited in the world.

Among his crowning achievements on the site is the bibliography on the George Orwell entry, the most comprehensive of its kind in the world; it took Knapp more than 100 hours to complete. He also has tasked himself with keeping the site's information on music albums up-to-date. And all for what?

"I've never accepted any restitution for my work on Wikipedia -- it's purely voluntary. ... Far be it for me to say that it's an act of love to edit Wikipedia. But I really do feel like it helps other human beings. That makes me feel good -- knowing that somehow I can be a small part of helping someone who I'll never know."

Rubber Chicken of the Day 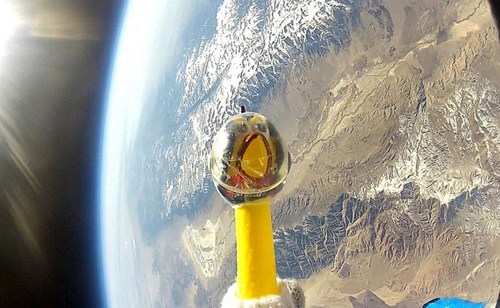 During last month's solar storm, high school students in California sent a sensor-equipped rubber chicken, "Camilla," into the stratosphere -- ostensibly to study solar radiation. With any luck, Camilla will help the budding scientists learn about space weather, and the effect of solar radiation on life. Regardless of how the experiment turns out, however, the kids will forever be able to start conversations with, "Once, I shot a rubber chicken into space..."

Curious as to where his adopted stray cat, Mr. Lee, routinely disappeared for days on end, Juergen, a German engineer, created a camera designed to fit around his pet's neck. After several unsuccessful attempts, Mr. Lee returned with the camera intact and documentation of his travels. Little did Juergen know that publishing the photos online would result in the making of CatCam, an official selection of SXSW Film Festival.

Trayvon Martin Tribute of the Day 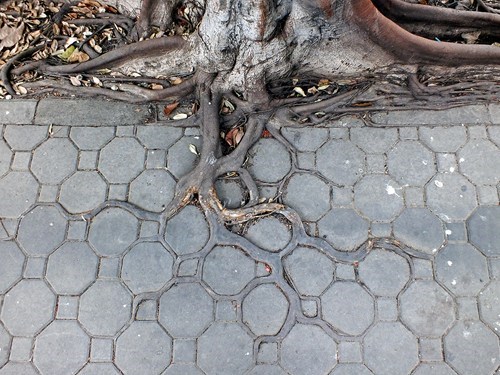 Today on The Daily What Geek: Pics from the set of Star Trek 2

Lunchtime Leisure: Dungville (via) Lunchtime List: 11 Works of Art Made With Road Maps

Weekend Read of the Day 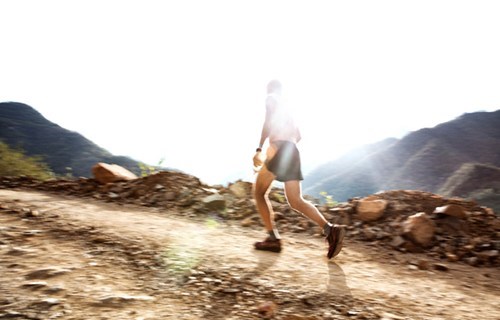 In which writer Christopher McDougall sets out to find Micah True, aka "Caballo Blanco," a long-distance runner who went missing after setting out on a 12-mile hike in the Gila National Forest. Spoiler alert: True, who became famous as one of the subjects of the book "Born to Run," died last month. 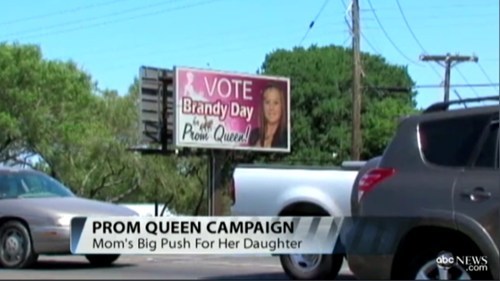 When Texas high-schooler Brandy Day suggested to her mom that they rent a billboard to help along her campaign for prom queen, she never imagined her mom would spend more than $1,500 on newspaper ads, fliers, a customizable outdoor display sign at a local taqueria, and -- the nail in her prom queen coffin -- a "pink rotating outdoor" billboard. "I was joking, but she took me seriously," she said. "When she texted me a pic of the billboard and the newspaper, I was shocked."

Match.com Spreadsheet of the Day 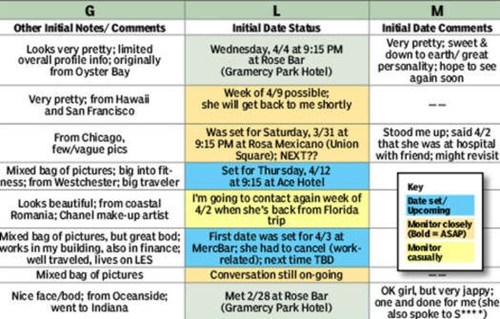 The story of the guy who used an Excel spreadsheet to keep track of his Match.com dates just keeps getting better.

The genius' identity has been revealed; he's David Merkur, a 28-year-old Manhattan investment banker (currently single). And a woman who earned the top score on his spreadsheet is furious not with Merkur, but with the girl who leaked the spreadsheet in the first place. "Why would she send it to the whole world?" asks Liliana Beidaut, a 26-year-old makeup artist who earned a 9.5 on Merkur's 1-10 scale. "My face is plastered everywhere now. I was just thinking that I was using Match.com."

Merkur, for his part, is keeping an understandably low profile.

Hot Mess of the Day

Apparently, the Rebecca Black phenomenon CAN get worse.

In which we follow young Quill's journey as he learns to be a guide dog for the blind. Debuts May 18. 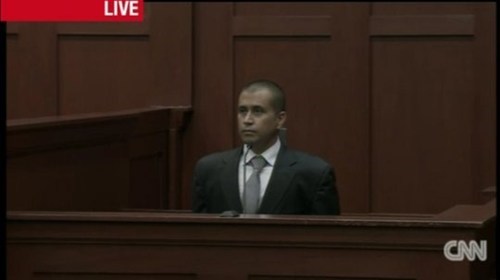 George Zimmerman has been granted bond -- set at $150,000 -- in the February 26 shooting death of Trayvon Martin. Circuit Judge Kenneth Lester set several conditions for Zimmerman's release, including a curfew, but said further details need to be worked out between Zimmerman's attorney and law enforcement. Zimmerman will not be released today.

Zimmerman's family asked the judge this morning to grant bail while he awaits trial. Family members -- testifying by phone because they say they have been threatened -- argued that Zimmerman is neither a flight risk nor a threat to the community.

"He is absolutely not a violent person," said his wife, Shellie Zimmerman.

Defense attorney Mark O'Mara would prefer that Zimmerman be allowed to leave the area because of concerns about his safety. "Normally, the conditions are that you stay local. I think that is going to be difficult," he said. "I think nobody would deny the fact that if George Zimmerman were walking down the street today, he would be at risk. That is a reality."

George Zimmerman took the stand to make a statement.

"I wanted to say I am sorry for the loss of your son. I did not know how old he was, I thought he was a little bit younger than I am and I did not know if he was armed or not."

Bill Nye the Science Guy PA of the Day

Bill Nye found himself in Colorado with a little free time, so he decided -- to our great good fortune -- to party with Bill Nye and the Science Guys.

Microsoft Resignation of the Day

Karen X. Chang quit Microsoft this week after three years working on Excel code. Of course, as an amateur musician, she chose to offer her resignation to her team in a song.

Joe Biden gets the Bad Lip Reading treatment -- and no one notices.