We've all seen this meme, featuring Leonardo DiCaprio laughing while holding a drink in the movie Django Unchained, floating around the internet. It's being used to exhibit some of the best classic dad jokes, and we're here for it. Enjoy! 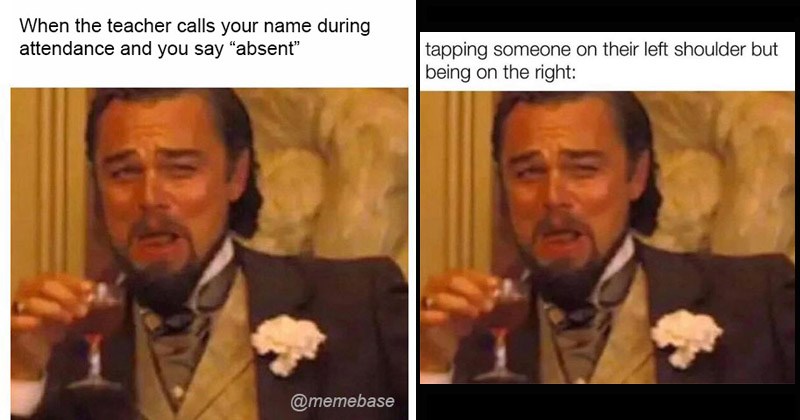 Let's just get this out of the way: can anyone really say Matt Damon's name without thinking of that scene in Team America: World Police? We certainly can't. Now without further ado, here are some memes featuring the man himself aging rapidly in four panel images. Check out more info at Know Your Meme! 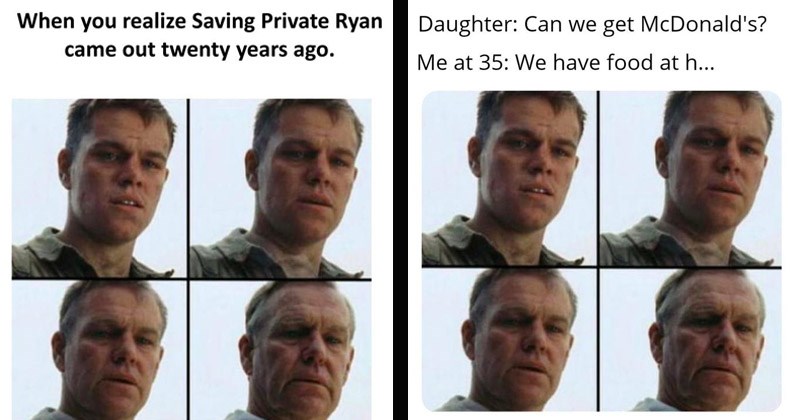 Even though Community aired its final season in 2015, the show still lives on in our hearts. As a commemorative gesture, here are 20 memes and moments that brought us a lot of joy, and we think they'll do the same for you. And speaking of off-air shows, here are some Parks and Rec memes. It's your lucky day! 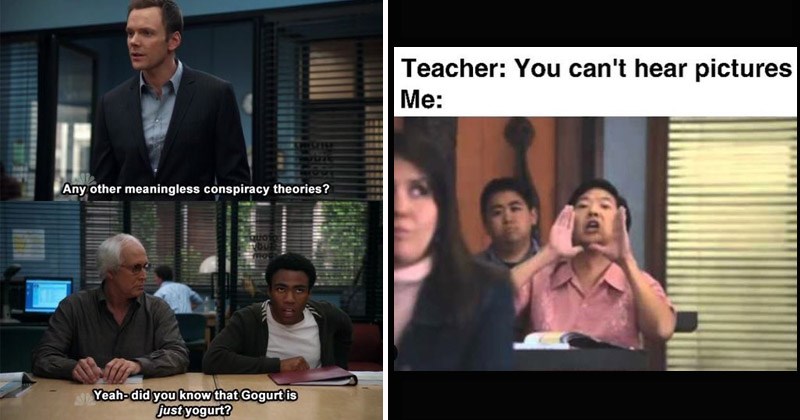 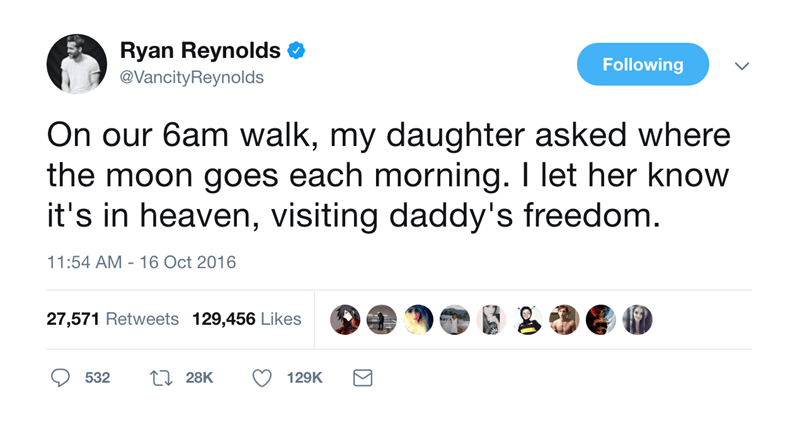 Rescue of the Day: Brendan Fraser’s Career, Which Some Fans are Trying to Save

Since the announcement of a new Mummy movie sans Brendan Fraser, fans of the former Encino Man have been making moves to save the 48-year-old actor’s career. Fraser, who has largely been unseen since his role in the (somehow) Oscar-winner Crash, has kept a low profile these last few years. But in the weeks since the Mummy trailer’s release, intense fan interest has emerged.

Over 34,000 signatures now grace a change.org petition to “Bring Brendan Fraser back into film/television.” Following his 2007, the petition reads, Fraser is required by law to pay $900,000 annually in alimony. The petition pleads with he networks to help get Fraser “back on his feet again” because “we miss him.”

Other efforts to rescue a man that has rescued us from a dull time at the movies many times over have included the #SaveBrendanFraser hashtag on Twitter and, as The New York Post points out, “successfully campaigned to get his ranking on IMDb among the top 500 actors.”

As for the new Mummy, Fraser has given Cruise his blessing saying, “Tom’s going to be great in it. He has incredible worldwide appeal.”

We miss you, Brendan. Good luck.

Actor Alan Rickman Dies at 69 After Battle With Cancer

By Grabthar's Hammer what a devastating loss. Esteemed British Actor Alan Rickman has passed away at 69 after a battle with cancer.

Rickman was known by many for his exceptional portrayal of the complex and conflicted villain Severus Snape in the films adapted from J.K. Rowling's Harry Potter books.

But real-talk the strapping lad could make most anything epic.

From his acclaimed role as criminal mastermind Hans Gruber in Die Hard:

To that time when director, Kevin Smith, recognized he'd happened upon a British stud who had a voice deeper and richer than a Ghirardelli 98% Dark Chocolate bar. Yeah the voice of a god. Literally:

To what was one of his arguably best roles as Colonel Brandon in Ang Lee's 'Sense and Sensibility':

Throughout his career Rickman continually demonstrated an awe-inspiring range, while at the same time establishing himself as something of a legendary 'bad guy.' Let's get real though, his bit in Galaxy Quest — the epic sci-fi romp — kind of takes the cake. 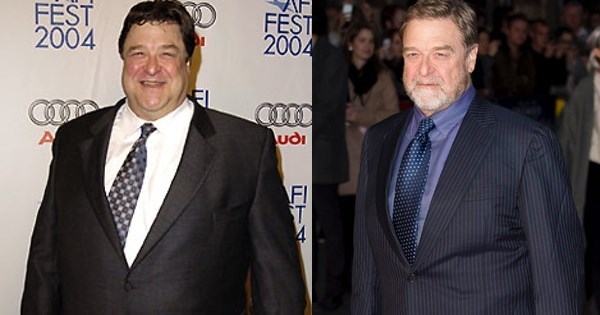 Actor John Goodman has lost over 100 pounds, and he's pretty stoked about it.

The Treme and Argo actor revealed his dramatic weight loss on the red carpet at the London premiere of Trumbo. "I know it sounds sappy, but it was a waste," Goodman told PEOPLE "It takes a lot of creative energy to sit on your ass and figure out what you're going to eat next ... I wanted to live life better." Goodman's new film (starring Bryan Cranston and Helen Mirren) come out in November. Check out the trailer below. 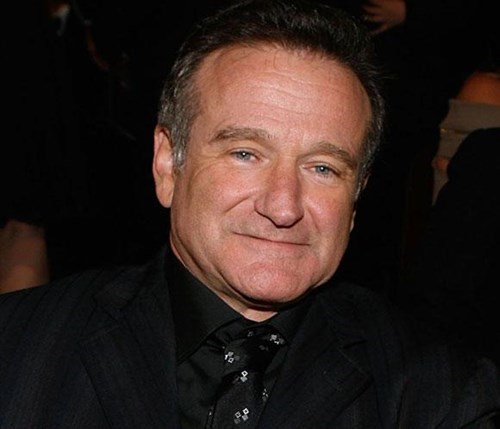 UPDATE: While people are trying to still make sense of Williams' suicide, his wife revealed that the beloved entertainer suffered from Parkinson's disease in the following statement:

Robin spent so much of his life helping others. Whether he was entertaining millions on stage, film or television, our troops on the frontlines, or comforting a sick child — Robin wanted us to laugh and to feel less afraid.

Since his passing, all of us who loved Robin have found some solace in the tremendous outpouring of affection and admiration for him from the millions of people whose lives he touched. His greatest legacy, besides his three children, is the joy and happiness he offered to others, particularly to those fighting personal battles.

Robin's sobriety was intact and he was brave as he struggled with his own battles of depression, anxiety as well as early stages of Parkinson's Disease, which he was not yet ready to share publicly.

It is our hope in the wake of Robin's tragic passing, that others will find the strength to seek the care and support they need to treat whatever battles they are facing so they may feel less afraid.

The Oscar winning actor and comedian unexpectedly passed away Monday morning at the age of 63. According to a press release issued by the Marin County Coroner's office, the Sheriff's office suspects the death to be "suicide due to asphyxia." Williams' publicist has released the following statement:

Robin Williams passed away this morning. He has been battling severe depression of late. This is a tragic and sudden loss. The family respectfully asks for their privacy as they grieve during this very difficult time.

Robin Williams won an Oscar for his supporting role in Good Will Hunting and is also well known for his other roles in films such as Mrs. Doubtfire, Hook, and Jumanji.

Halloween Hunk of the Day

Bonus: Tim Curry's Halloween song from "The Worst Witch" for your viewing pleasure!

Iron Man 3 Trailer of the Day

Full-Length Lincoln Trailer of the Day

We finally get to see Daniel Day-Lewis in action, and it's enough to give us chills.

Spielberg's Lincoln is in theaters November 16.