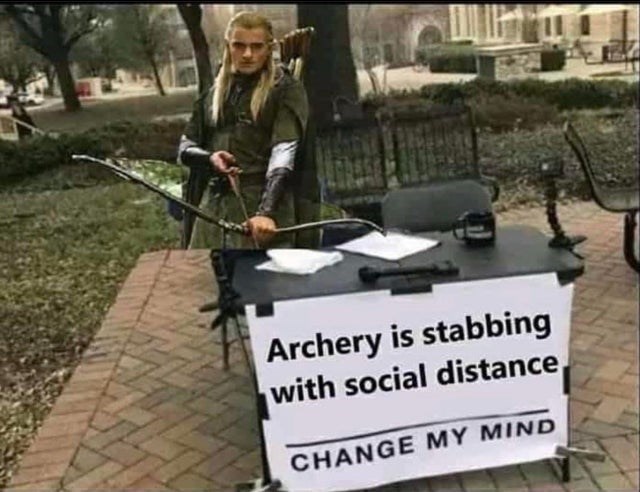 Hacktivism of The Day: Anonymous Releases Full List of Alleged KKK Members to The World 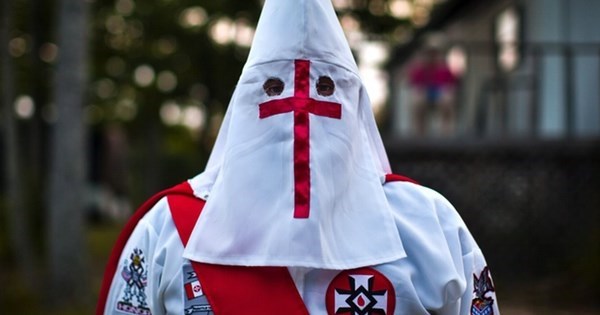 Anonymous is back at it again.

The group released a similar, but much smaller list, earlier this week that named prominent members of congress and mayors as KKK members.


But those claims have largely been debunked.

"We consider this data dump as a form of resistance against the violence and intimidation tactics leveraged against the public by various members of Ku Klux Klan groups throughout history," Anonymous said.

The data dump has also given the public a glimpse at the strange slang KKK members use between each other. Hacktivism of The Day: Anonymous Just Released The Contact Info of KKK Members 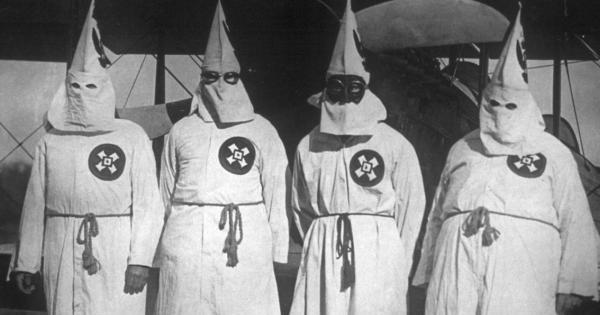 The hacktivist collective Anonymous just released the phone numbers and emails of about 40 alleged members of the Ku Klux Klan terrorist group.

It seems that phone numbers of KKK members are on the internet. ;) https://t.co/C54dX8dp7R

There is no place for racism now we're more connected, the time to cooperate and better the world is now.

Anonymous said in a press release that about 1,000 more KKK members' information would be released in the coming days.

"The aim of this operation is digital. Another cyber war trist, nothing more. We are not violent," the press release states.

"We will release, to the global public, the identities of up to 1000 klan members, Ghoul Squad affiliates and other close associates of various factions of the Ku Klux Klan across the Unites States."

Secrets of the Day: Anonymous Commuters Get to Make Their Confessions Public with The Waiting Wall

Via Free the Trees
Repost
Recaption

Alan Donohoe and Steven Parker have concocted a way to make London commuters share and experience the deepest confessions, fears and joys of their fellow humans. During the Brighton Digital Festival, from Sept. 21-27, the two artists have installed The Waiting Wall at the Brighton Station. There commuters can share their inner-most thoughts anonymously and the messages will randomly appear on the large screen.

The project's website explains where they received the inspiration.

In September 2015 commuters will notice a new digital display at Brighton Station. Brighton digital creatives, Free the Trees will be displaying a timetable themed digital display called 'The Waiting Wall'.

Standing on the concourse waiting for yet another delayed, overcrowded train, will become a rare eye-opening and uplifting experience. Inspired by the book Religion for Atheists by Alain de Botton, 'The Waiting Wall', referencing commuters' experiences, is an electronic display of Jerusalem's Wailing Wall, "that would anonymously broadcast our inner woes," thereby reminding us that "we are none of us alone in the extent of our troubles and lamentations."

Some are just regular worries, some are deep emotional expressions and some are fervent wishes.

If you'd like to watch the messages as they appear, or even add one of your own, visit the wall's website. 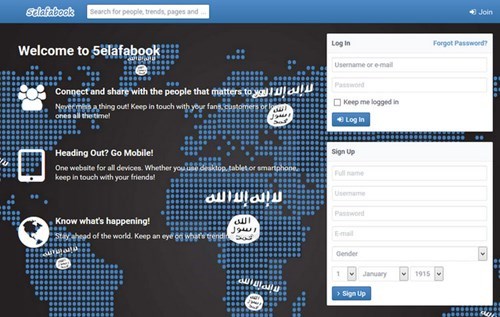 Between threats from Anonymous and a new crackdown from Twitter, ISIS is having a tough time reaching out and recruiting new psychopaths online.

To circumvent the censorship, the Islamic militant group has reportedly created its own social network called “Khelafabook.”

The Facebook clone claims it is independent and not actually sponsored by ISIS (even though it has ISIS logos all over its homepage). It says its goal is to show the world that they don’t only “live in caves” and “carry guns,” and they vow to “will rule the world by Allah’s permission.”

Khelafabook was set up by a man in Mosul, Iraq, according to The Independent, and is hosted in Egypt. There’s also an associated Twitter account which is linked to from the site.

The site first popped up last week, but has already been taken offline “to protect the info and details of its members,” according to a message on the page.

After it was taken down, Twitter accounts associated with Anonymous appeared to claim responsibility, as Vocativ points out.

For the the time being they’ll have to look elsewhere to share their terrorist pancake recipes.

Hack of the Day: Anonymous Shuts Down Government Websites in Florida

Remember that video of the 90-year-old man who was arrested for feeding the homeless in Ft. Lauderdale?
So does Anonymous. And the hackers decided to do something about it Monday in typical Anonymous fashion - with a cordial debate and months of planning and petitioning. Kidding - they hacked the hell out of them.
The group posted a video on YouTube warning the city that it would shut down its municipal websites if it didn't overturn a number of its homeless and panhandling regulations.
"It has come to our attention that Mayor John P. Seiler has become an embarrassment to the good law-abiding citizens of Fort Lauderdale," says the voice in the video. "You are a disgrace."
Soon after, they followed through with their promise, and a number of sites including the police department's were briefly out of commission.
But did it do anything to change the mayor's mind about the laws? Not in the least.
"I don't think we're going to be revisiting this ordinance anytime soon," Seiler said. 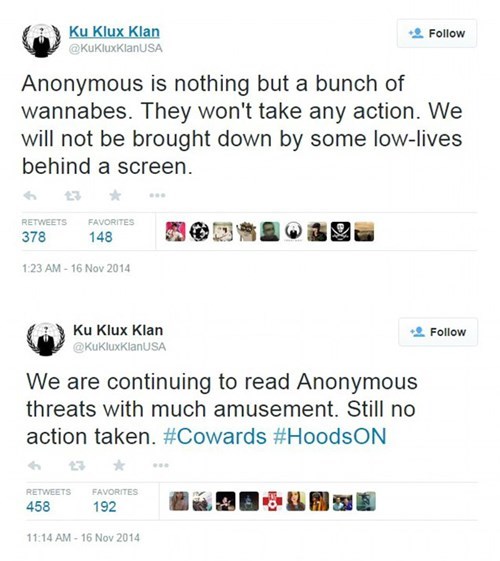 Over the weekend, reports emerged that the Ku Klux Klan passed out fliers and warnings indicating they would enact "lethal force" against Ferguson protesters should they display aggression in response to the grand jury hearing of the Michael Brown shooting.

Hactivist group Anonymous did not take kindly to these threats.

As of the morning November 16, the Ku Klux Klan still had control over their own tweets, as you're seeing from their official Twitter feed here (who knew that abject hate could be so tuned in to social media trends?). Just later that evening Anonymous seized the Twitter account to use to their own ends, changing its profile picture to their own iconic image and tweeting things like this: 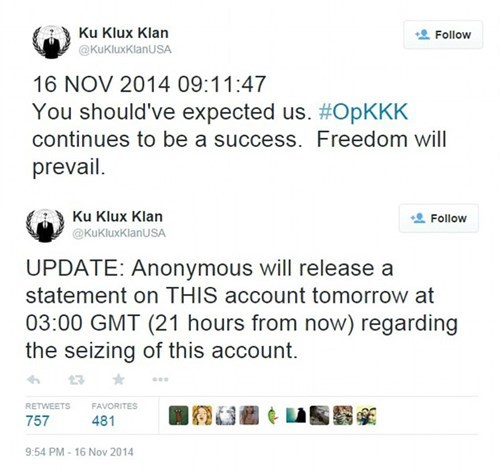 The moral of the story is the same as always: Just don't bother getting on Anonymous's bad side. 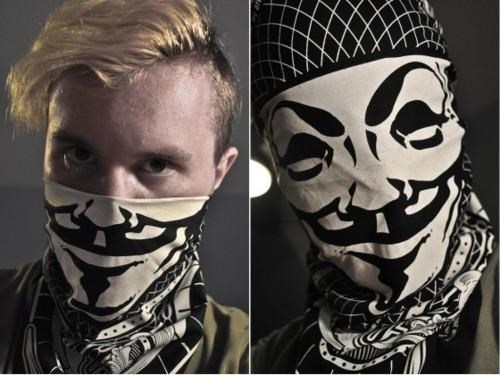 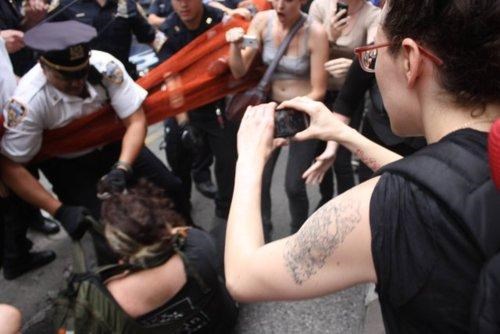 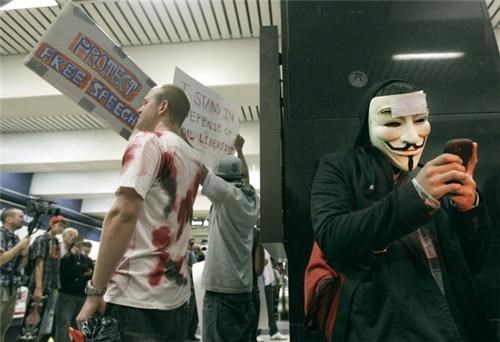