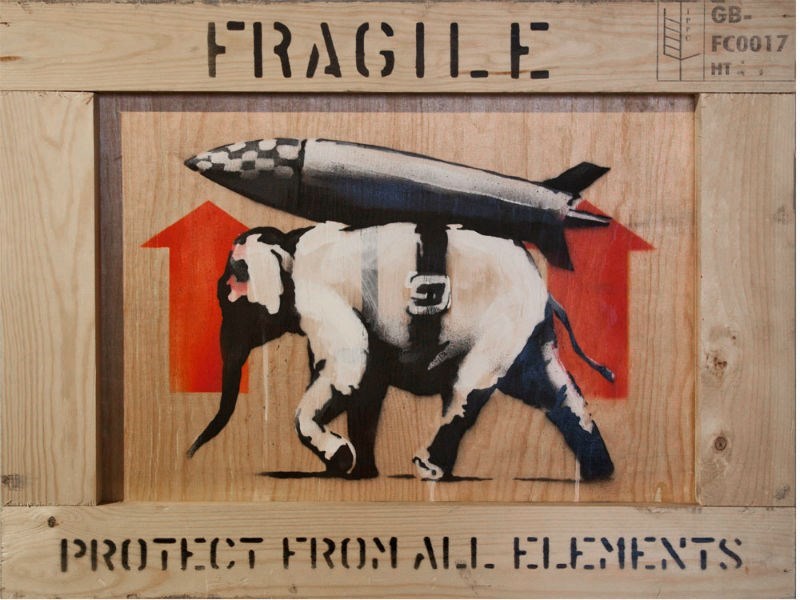 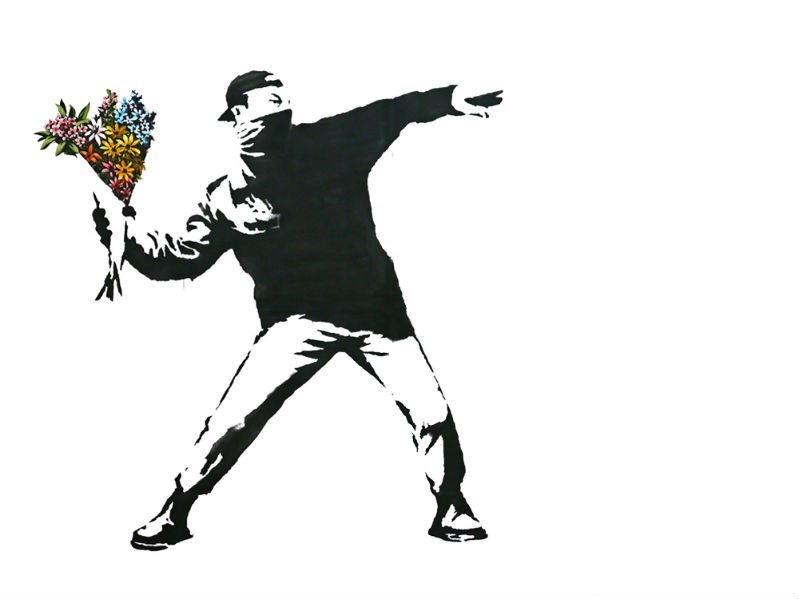 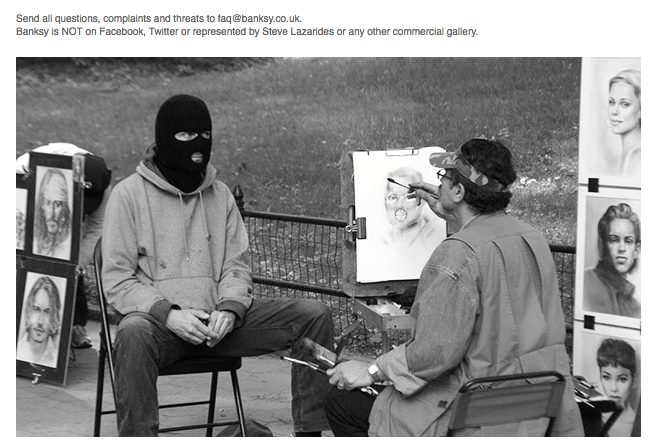 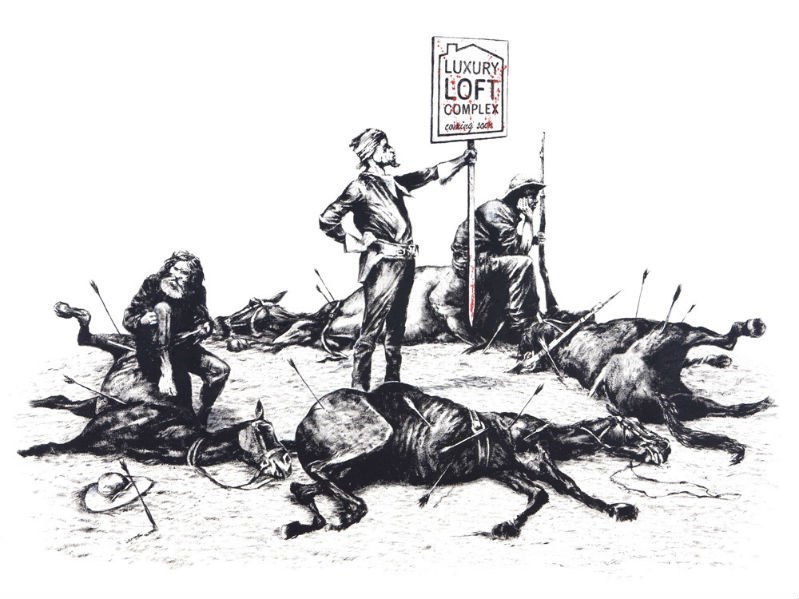 Science Has Discovered the Hidden Identity of Banksy 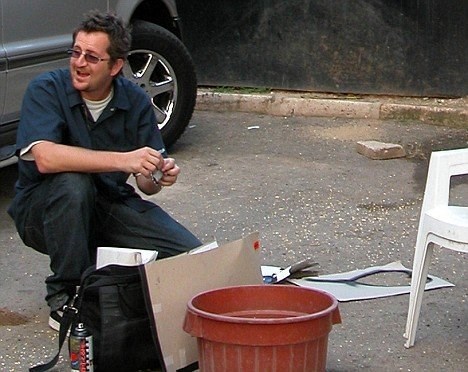 Scientists used a method usually reserved for finding serial criminals and identify the source of infections diseased to pinpoint the location of the elusive artist, Banksy.

Using the statistical models below they used the geographical locations of Banksy's projects and ended up finding a strong correlation with one person in particular. 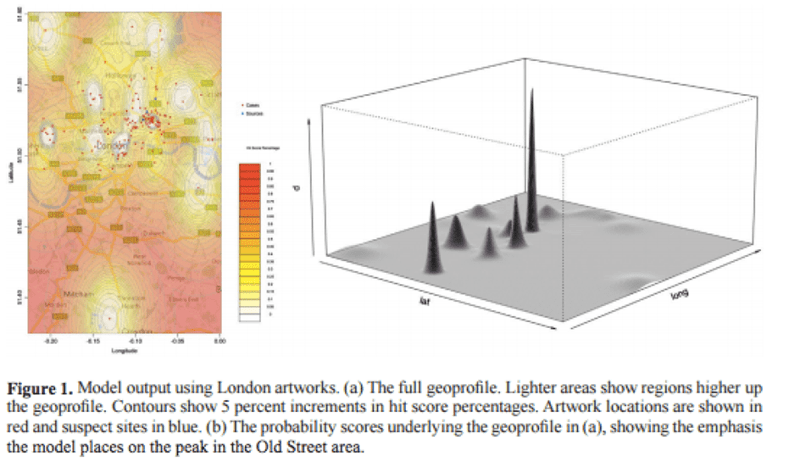 According to the BBC, publicly available information such as addresses or places he went to led scientists to Robin Gunningham, a man suspected of being Banksy since 2008.  A co-author of the study, biologist Steve Le Comber, told the BBC, "What I thought I would do is pull out the 10 most likely suspects, evaluate all of them and not name any… But it rapidly became apparent that there is only one serious suspect, and everyone knows who it is." 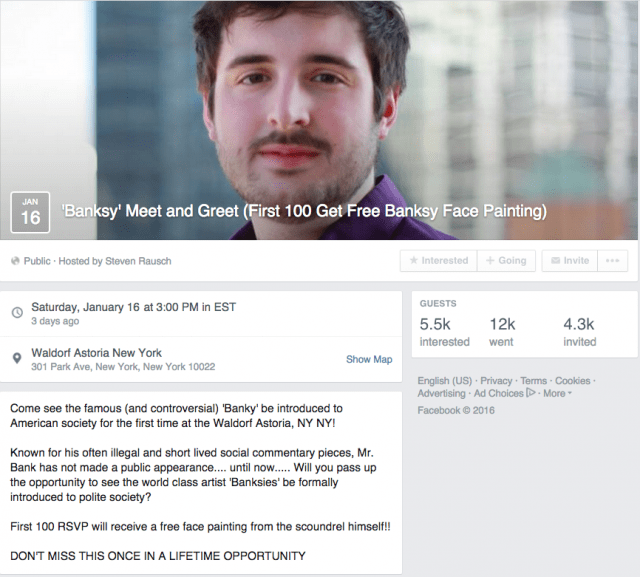 When this Facebook event was started in September of 2015, many called it fake, but they were totally wrong. Kind of.

In true Banksy style (probably?), he did not show up to this meet and greet, instead the few people who still showed up got to meet the definition of an average man. Literally, when you search Google for 'an average man' the first image that comes up is a picture of Michael Whatley, the man in the banner of this event.  He wasn't associated with the event's creation but, since he was the man in the picture he decided to stop by and he was ready to paint some faces. 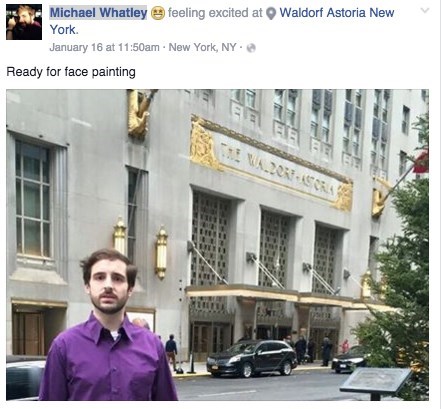 And paint faces he did. Attendees included this lovely lady carrying handfuls of spaghetti. Now her face says "Banksy Was Here". 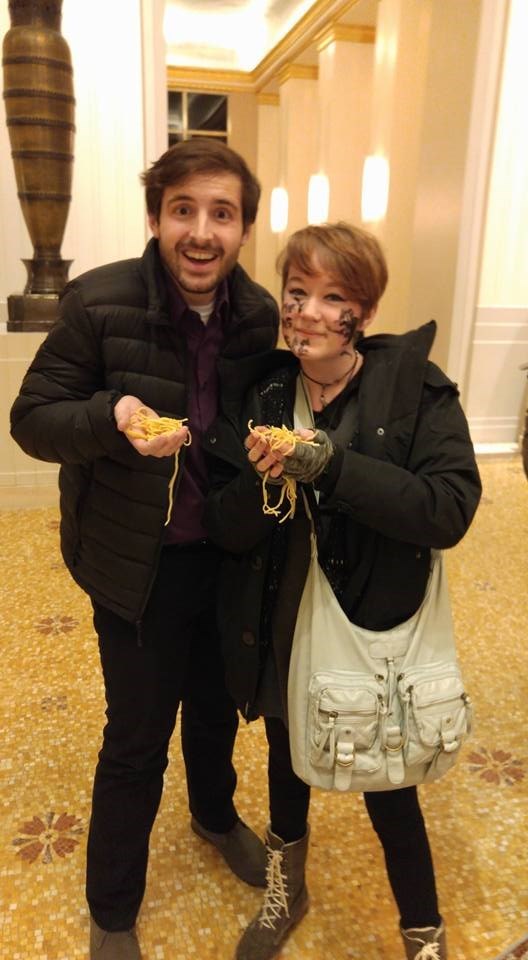 Hopefully she'll turn it into a tattoo to make this special moment permanent. 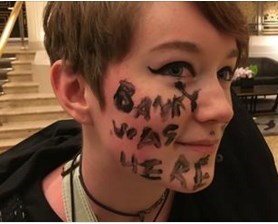 Charity of the Day: Banksy Says Dismaland Materials Will Go to a French Refugee Camp to Build Shelter 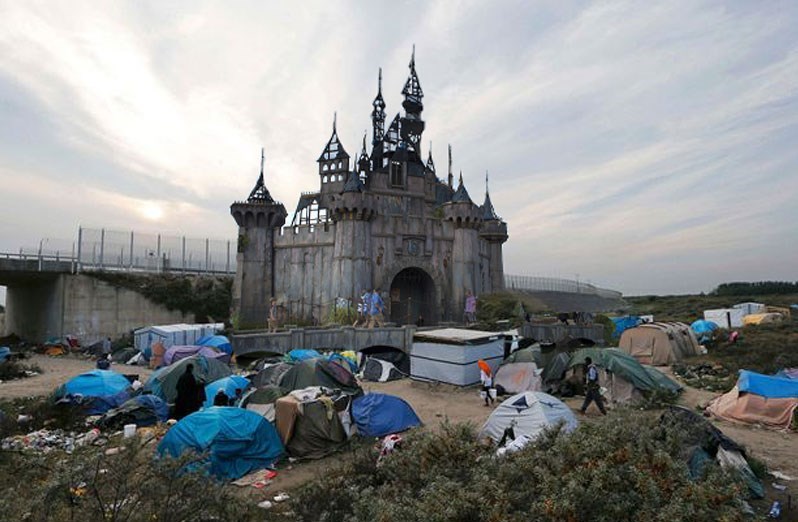 Remember Dismaland? That Banksy driven artistic bizarro Disneyland that promised a downer of a time for anyone who wanted to be bathed in meditations on the distractions of a morose, capitalist world? That one?

Well, it recently closed. But that doesn't mean the end for the materials that hosted tens of thousands on the western shores of England.

According to the Dismaland website the materials will go to the Calais refugee camp in France.

All the timber and fixtures from Dismaland are being sent to the 'jungle' refugee camp near Calais to build shelters. No online tickets will be available.

The Calais refugee camp is located in the north of France and has become home to thousands seeking asylum. 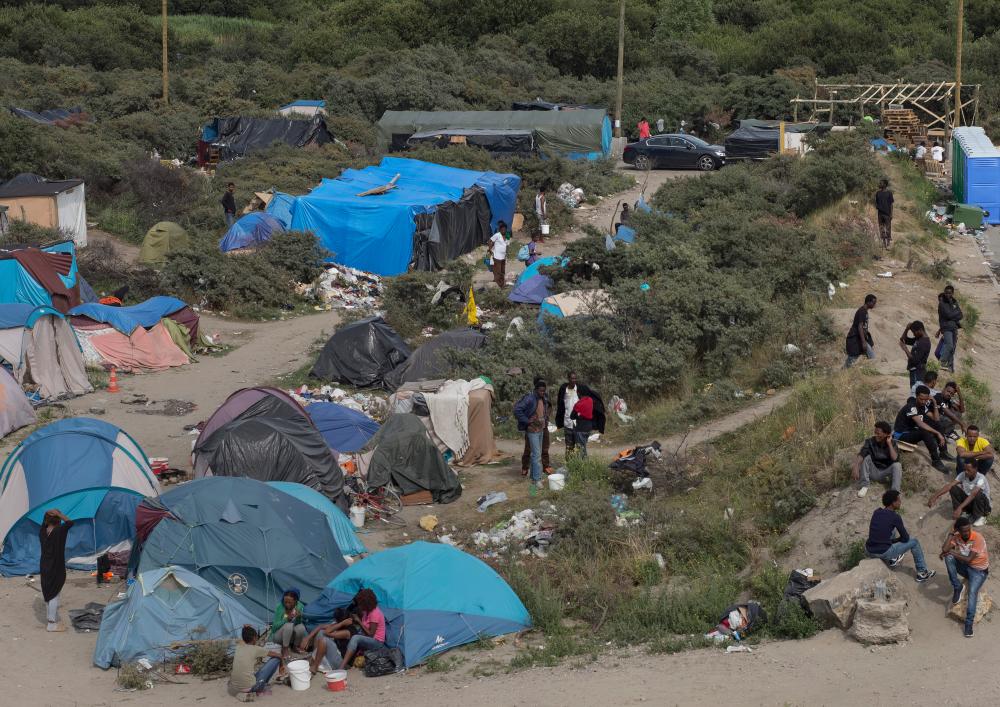 The Guardian had an extensive visit to the camp last month and it sounds like those materials could really be useful.

This camp was set up in April after the previous "Jungle camp" was demolished. It has a day centre that provides shower facilities and offers migrants one meal a day. However, aid workers say they are being overwhelmed by the numbers of people coming, mainly from east Africa, the Middle East and Afghanistan, and conditions in the rest of the site are desperate.

...Women make up around 10% of the camp's population but have gone largely unnoticed, in part because early arrivals were secluded in a heavily guarded camp for women and children, but its 100 beds filled up long ago. Efforts are being made to set up a separate classroom to serve around 200 women - many of whom feel uncomfortable attending classes with male students they don't know - and their two dozen children.

Seems like a good use for a large scale piece of art. But hopefully, this doesn't make its way down there:

But in case you needed a further examination on whether or not you should spend your honeymoon there, Banksy released this promotional film Aug. 25. It actually gives a really detailed view of the variety of art and 'attractions' that awaits for every uncomfortable family visit, ending in disagreements about contemporary art and nihilism. It's also just pretty damn despondent and unsettling, which is of course, the point.

The bemusement park will last until Sept. 27 and costs a very reasonable £3.

And according to the website, children under 5 get in free.

Art of the Day: Banksy Opens Up a Deranged, Nightmarish Version of Disneyland

Citizens of the western English town of Weston-super-Mare thought the construction of a dilapidated castle in their defunct water park was for the filming of a movie.

The large send-up of Disneyland will open Aug. 21 and will feature of the works of 46 international artist, including installations, workshops and events.

There will be a cinema, mini golf, a circus tent and instructional workshops 'on how to hack billboards'.

A Facebook page has been set up to welcome visitors and give a peek at what's waiting for them in the murky waters of Dismaland.

The site promises 10 new works from Banksy himself, as well as pieces from Damien Hirst, Jenny Holzer and Mike Ross.

Banksy spoke to the Weston Mercury about Dismaland Aug. 20.

"I always loved the Tropicana as a kid, so getting to throw these doors open again is a real honor, I hope that everyone from Weston will take the opportunity to once more stand in a muddle of murky water eating cold chips to the sound of crying children."

It's not too late to plan that summer vacation of your dreams.

Fail of the Day: Man in Gaza Sold an Original Banksy for Just $175 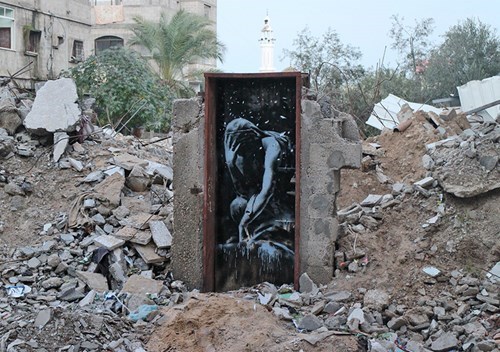 Back in February, world-famous street artist Banksy posted several new pieces in Gaza, including a giant kitten, to try to draw some attention to the region.

His public work tends to be snatched up pretty quickly by people looking to make some serious cash. They can typically be sold to collectors for hundreds of thousands of dollars. His “Mobile Lovers” piece went for more than half a million dollars last year.

One man in Gaza probably wishes he had been told that before he let an original Banksy go for a measly $175.

Rabie Dardouna, who owned the door and rubble which Banksy adorned with a piece called “Bomb Damage” (above), pawned it off to a man named Belal Khaled for just the value of the metal. His house was destroyed during an Israeli attack last year.

“I did not know that it was this valuable. I heard it can be sold for millions,” Dardouna told The Guardian. “Now I want the door back.”

Khaled claims he only purchased the door to “protect its artistic value” and isn’t looking to make money off the deal.

He added that he might one day consider displaying it in a gallery to “speak about the suffering of Gaza and the agonies of war.”

Street Art of the Day: This New Banksy Piece Depicts Agents Listening in at a Phone Booth 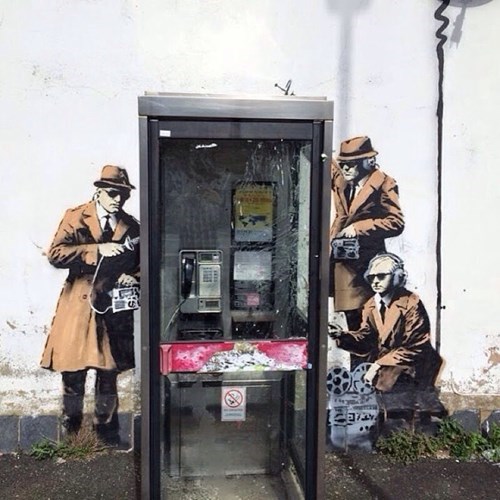 Via gloucestercitizen
Repost
Recaption
Advertisement
The Daily What
Favorite

Didn't See That Coming of the Day: Banksy Throws a Blowout Sale in Central Park

Over this weekend, the world-famous street artist Banksy set up an unmarked stall near Central Park in New York City to sell his original artwork for bargain prices and this is what happened.

Banksy At Home of the Day 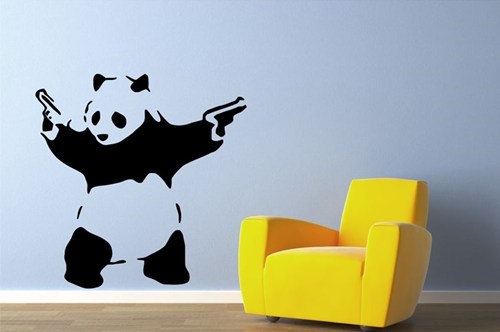 Via The Roosevelts
Repost
Recaption

Giant vinyl wall decals of the street artist's most iconic creations now can be had for just $25 -- this week only, via Living Social. (U.S. residents not eligible -- sorry!) 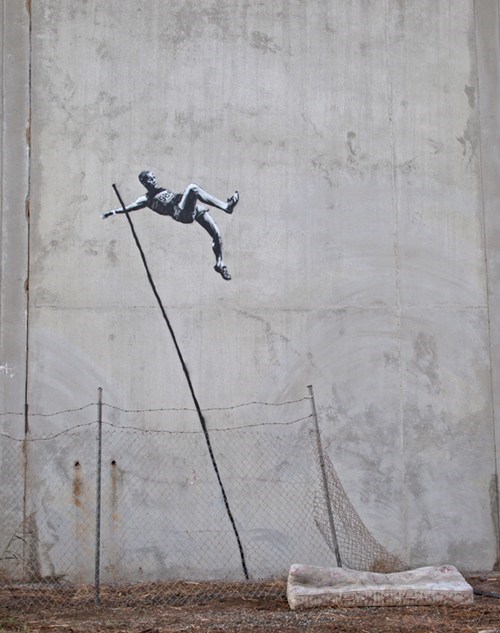 Banksy gets in on the Olympic action.

Olympic Protest of the Day 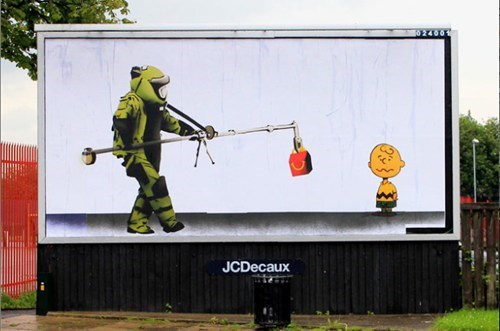 In protest of the strict branding regulations for the upcoming London Olympics, 25 street artists known collectively as Brandalism have reclaimed more than 30 existing billboards around the U.K., postering over the existing content with their own ad busts:

Installed over five days in one continuous road trip that has covered the length of the country, the Brandalism crew have hit 33 spots in 5 cities. Edited and developed on the fly, this project sees the culmination of 8 months work and we will be adding more content to the site after we get some serious sleep, updates will follow daily… Inspired by a little known writer Sean Tejaratchi, the infamous British street artist Banksy plagiarized and popularized the Brandalism term in his latest book -- Wall & Piece. It is from here that we are picking up where they both left off with the Brandalism project by putting words into action with the world's first international, collaborative subvertising project. 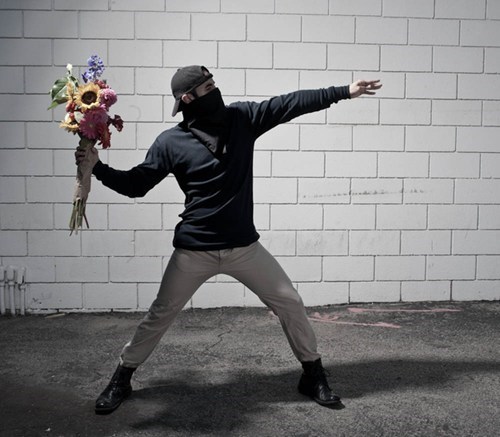 Photographer Nick Stern drew inspiration from Banksy's iconic street art for a collection of life-imitates-art photos. View them all here. 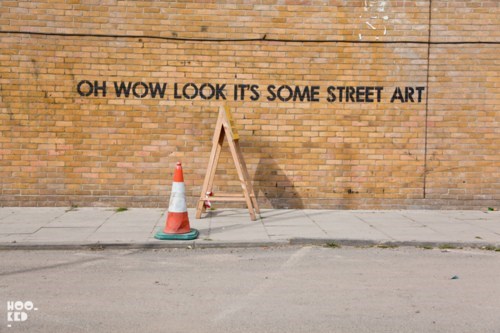 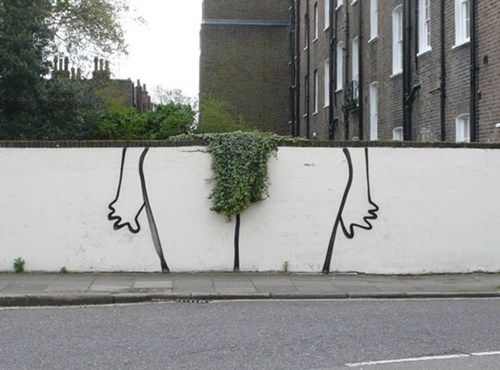 Banksy has updated his website with his latest stuff, including the child laborer, The Bush, I Hate This Font, Paper Crane, and more.

This Is All Kinds of Wrong of the Day 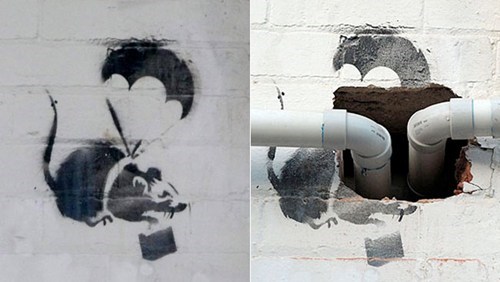 Banksy's famous Parachuting Rat, located on a wall in the Melbourne, Australia suburb of Prahran, has been destroyed by builders doing drilling work for a café.

Local business owners were upset by the needless demolition of the piece by workers who apparently didn't realize what they were destroying. The wall did contain other graffiti, but area taggers had avoided painting over the Banksy.

"Had it been 20cm higher or 20cm to the side this would never have happened," neighboring business owner Jacqui Vidal told the Stonnington Leader, "This should have been avoided. It's not a big piece, but it is one of the few remaining Banksys in Melbourne."

The Rat was destroyed once before by cleaners who painted over it during a 2010 anti-graffiti campaign, but was later restored.

There is some good news, though: a possible new Banksy piece -- showing an Asian boy hunched over a sewing machine and a Union flag -- has appeared on the wall of a Poundland shop in London. It has yet to be confirmed as authentic on the artist's website.