Presidential Interview of the Day: John Stewart Welcomes Obama for His Last Appearance on The Daily Show

President Barack Obama came back for the seventh time to The Daily Show July 21 before John Stewart takes his leave from the show after 16 years as host.

A candid Obama answered Stewart's ongoing questions about the last year's continuing Veterans Affairs controversy, the Iran nuclear deal and senioritis in his last 18 months in the oval office.

They also talked about Donald Trump's 2016 presidential campaign and shared thoughts on how to introduce more civic interaction.

In one of the more striking uses of Obama's power, the president did threaten an executive order that would keep Stewart behind the desk of the The Daily Show, stopping Stewart's impending Aug. 6 departure. Stewart had to claim that it was more of a state's right issue and that he would still retire from the show. Obama's seven visits to The Daily Show has spanned almost the whole of his political career. He first showed up in 2005 while he was still an Illinois senator and would continue to stop by on election cycles and off.

"You've been a great gift to the country," Obama said to Stewart at last night's appearance.

You can watch the whole episode here.

President Obama receives his fair share of criticism online, but he’s embracing all the hate in a new edition of “Mean Tweets” on Jimmy Kimmel Live.

Watch him react to a #ThanksObama and someone who does’t approve of his dad-jeans style.

“Is there any way we could fly Obama to some golf course halfway around the world and just leave him there?” writes one girl.

You can also watch Kimmel’s post-Mean Tweets interview with Obama below, in which he says he didn’t think those messages were very mean at all.

“You should see what the Senate says about me,” he says.

He also talks about why he still has a BlackBerry and how he doesn’t actually use Twitter himself.

Art of the Day: Obama is First President to Have 3D-Printed Portrait

Earlier this year, a team of Smithsonian-led 3D digital imaging specialists scanned President Obama and then sculpted his bust using a 3D printer.
It is the first 3D portrait of a United States President.
From Smithsonian:

For the 1:1 bust, in a process called Selective Laser Sintering (SLS), a laser melted nylon powder into a highly accurate and durable print. Given the size of print (the bust stands 19 inches tall, and weighs almost 13 pounds), the printing process took 42 hours, after which the print cooled down for 24 hours.

The White House has now released a behind-the-scenes video of the process, and you can check out the bust in person in the Smithsonian Castle where it is on display for the public Dec. 2-31.

Internet Freedom Fighter of the Day: President Obama Gets Tough on Net Neutrality

Via The White House
Repost
Recaption

Obama made his first big push in the fight for Net Neutrality Monday, with a statement encouraging the FCC to keep the Internet open and free.
"There are no gatekeepers deciding which sites you get to access. There are no toll roads in the information superhighway," Obama says in the accompanying video, which opens with a playful little "buffering" animation.
FCC chair Tom Wheeler proposed new Internet traffic rules earlier this year, and millions of people commented on the FCC website in protest.
From his statement:

"Net neutrality" has been built into the fabric of the Internet since its creation — but it is also a principle that we cannot take for granted. We cannot allow Internet service providers (ISPs) to restrict the best access or to pick winners and losers in the online marketplace for services and ideas. That is why today, I am asking the Federal Communications Commission (FCC) to answer the call of almost 4 million public comments, and implement the strongest possible rules to protect net neutrality.

Obama also emphasized that ISPs shouldn't block sites that are legal or throttle a user's service.

Ebola Update of the Day 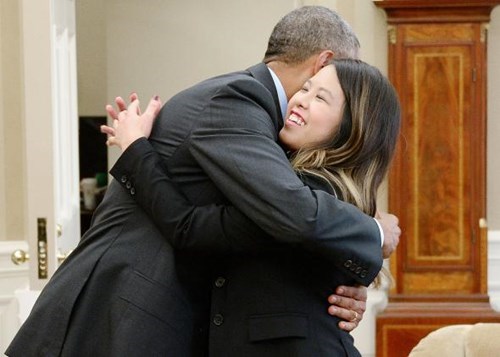 In case you didn't have cable/internet connection in your homemade quarantine tent or hazmat suit, Ebola was all over the news this weekend:

-The Nurse in Newark does NOT have Ebola (Yay!)... But she is still pissed. [CNN]

-The Hug Seen Round the World [Slate]

Barack Obama Gets Told to Back off This Dude's Girlfriend, Plays it Off With Class 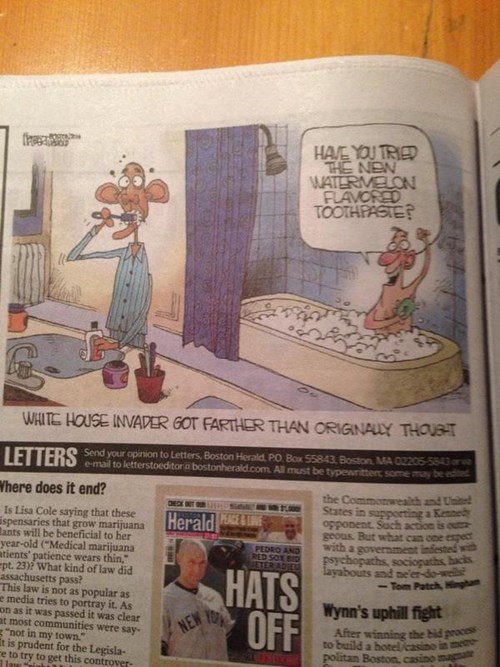 According to reports, cartoonist Jerry Holbert was asked to change the punchline of the joke from "Watermelon" to "raspberry," which he did, but not before it was sent to the press. He has since issued an apology for what some see as a racially-charged joke.

We've All Been There: The Son of a Secret Service Agent Gloriously Faceplants on the President's Couch 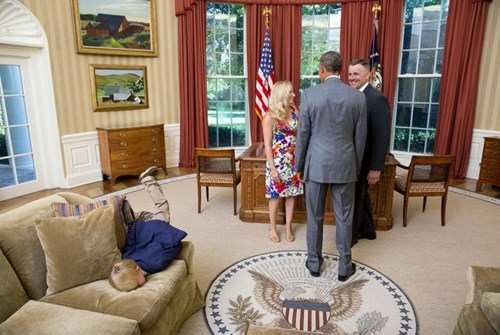 An admitted pot smoker, President Obama couldn't help flashing a smile after being offered a hit of marijuana during a visit to a bar in Denver. Colorado is one of the two U.S. states (Washington being the other) that now allow recreational pot smoking under state law.

In Case You Missed it: The President of the United States Sat Down With the Founder of Tumblr for a Live Q+A Session

In the President's continued attempts to reach out to young voters, Barack Obama sat down with David Karp of Tumblr to take questions from the microblogging community. The humble "ask" feature has finally made it to American politics! Check out the full video of the event here:

Via The Daily Conversation
Repost
Recaption

Between Two Ferns With President Obama

There was a problem rendering this video - it may have been deleted.
By stephenwood51
Repost
Recaption

Zach Galifianakis has his most memorable interview yet.