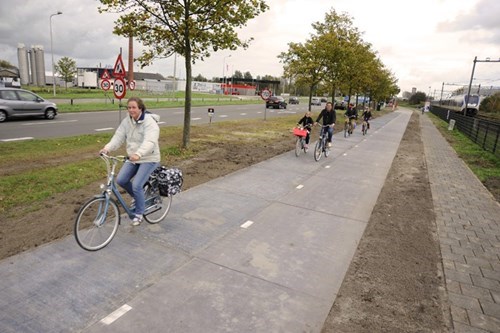 The Netherlands is about to make you feel really guilty about driving your car to work this morning.
The world's first solar-powered bike lane is scheduled to open this week in Amsterdam.
The initial 70-meter long path will run between two suburbs of the city, and the power it generates will be fed into the electrical grid, generating "as much electricity as is used by 2-3 average households annually."
SolaRoad, the company who designed it, explains that it will be able to withstand the pressure from everyday use.

It consists of concrete modules of 2.5 by 3.5 meters with a translucent top layer of tempered glass, which is about 1 cm thick. Underneath the glass are crystalline silicon solar cells.

Via Michal K.
Repost
Recaption
Advertisement
The Daily What
Favorite

Premature Celebration of the Day: Guy Doesn't Realize There's Another Lap to the Race... Ends Up in 56th Place

Via CyclingHubHD
Repost
Recaption
The Daily What
Favorite

North Korea News of the Day 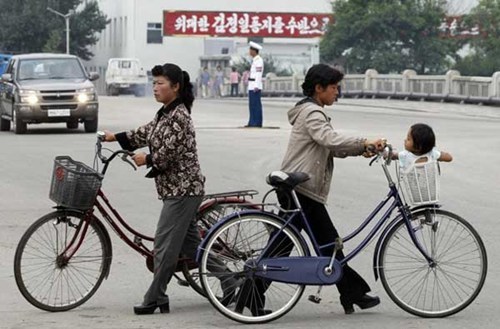 A slice of good news from North Korea today. And by "good" we mean better than hearing about human rights violations, and by "North Korea" we mean the place where this story came from.

Supreme leader Kim Jong Un reversed a 20-year-old rule -- implemented by Papa Bear himself -- banning women from riding bicycles. The law was originally mandated after Oh Hye Young, the daughter of National Defence Commission vice-chair Oh Geuk Ryeol, was killed by an automobile while riding a bicycle in the 1990s. The law was never strictly enforced outside Pyongyang, but it was still on the books, which means the old regime wasn't going to budge.

Ultimately, this change probably doesn't represent even a microscopic shift in ruling ideology, but at least Mr. Jong Un woke up on the right side of the bed one day, realized it was 2012 -- or whatever year their calendar claims it is -- and concluded that women can ride bicycles responsibly. Hooray for progress!