Inconvenience can strike at any time. So can disaster! 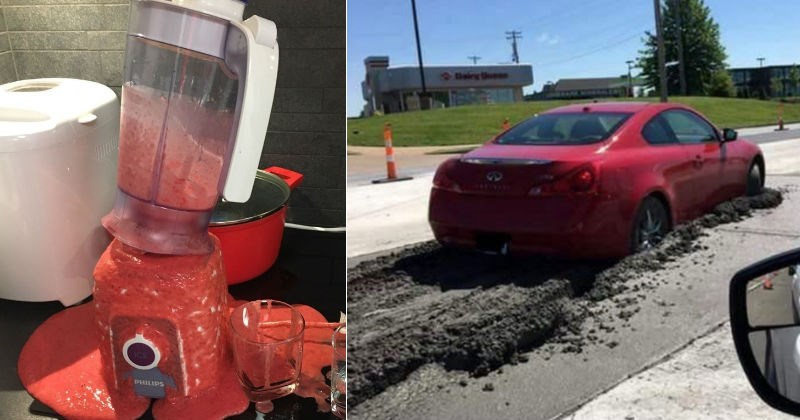 This story about an incompetent driving grandma is a real wild ride with maybe the dumbest ending we've ever seen. You just have to read the thing for full effect. If you want some more somewhat light funny stories, then here are some greentext stories to make you feel better about yourself. 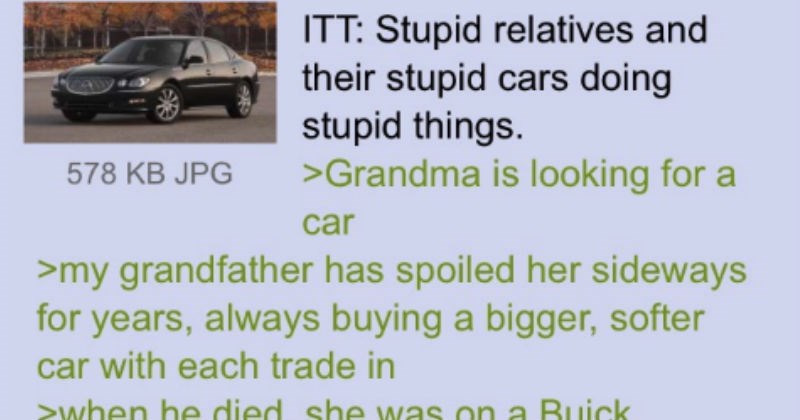 Lunch Break: 24 Funny Memes To Distract You From Reality

Lunch Break: 28 Random Memes And Comics To Improve Your Day

Memes will never put you in the friend zone. 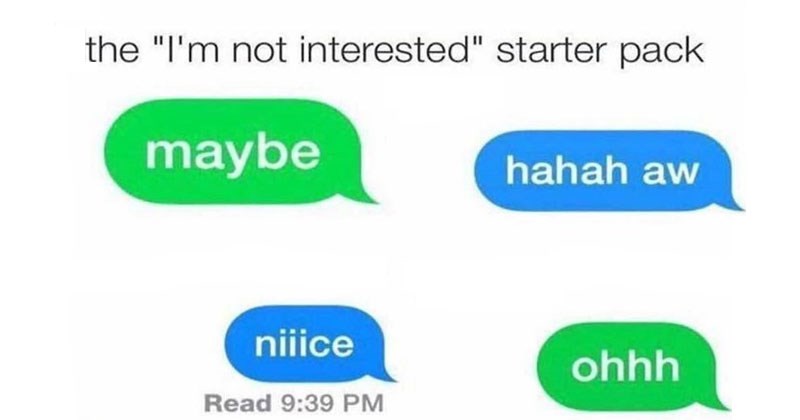 We're not super sure what drives people to make absolutely insane demands and insult the hell out of strangers their dealing with. Is it the anonymity? Maybe sheer desperation? Either way these folks don't look like they're going away any time soon, so the only thing we can do is prove to them that their tactics won't work. 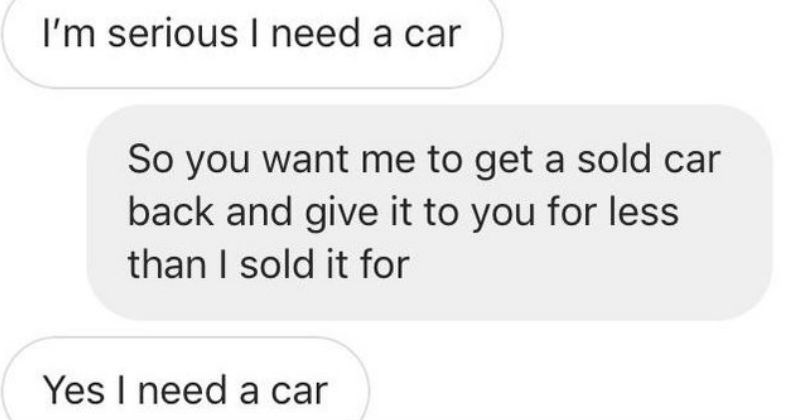 15 Times Things Went More South than a Goose in Winter

Sure, there's no sense crying over spilled milk, but a literal ton of garbage spilled on the freeway? That's something to get upset over. 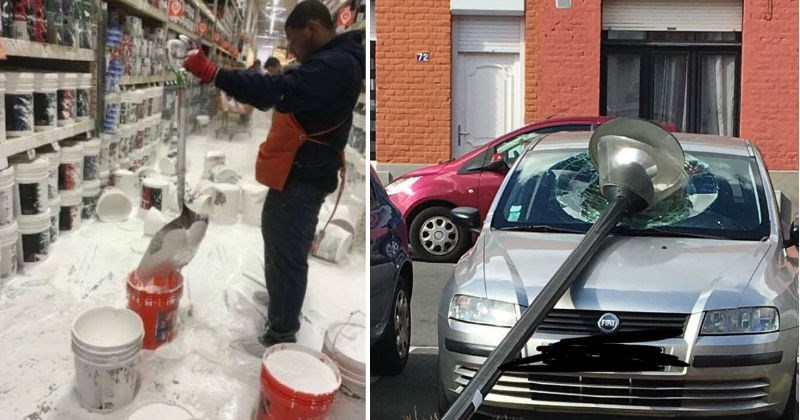 Just a whole bunch of spills and thrills. 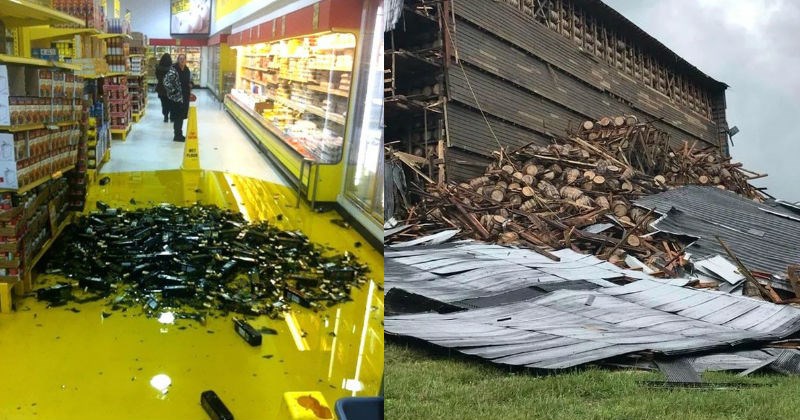 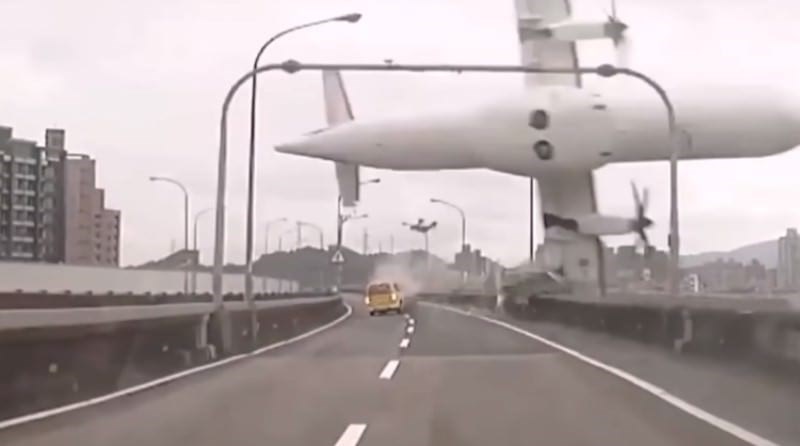 Retro is a concept we're all familiar with. Interior design, fonts, electronics, homewares, and fashion all pay homage to the trends of the past and constantly recycle old concepts into new ideas. So why not reinvent old-fashioned cars? That's exactly what Mercedes Benz did, reimagining the Mercedes Simplex car from 1902 into it's modern equivalent. And we must admit, it's very cool. 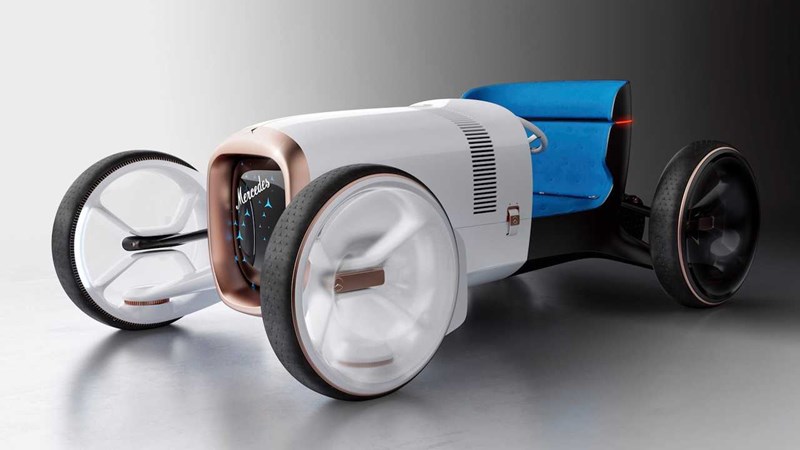 We believe congratulations are in order. We've all officially made it over the hump to Thursday, and that deserves celebration in the form of these procrastination-fueling and boredom-destroying memes. You're welcome. 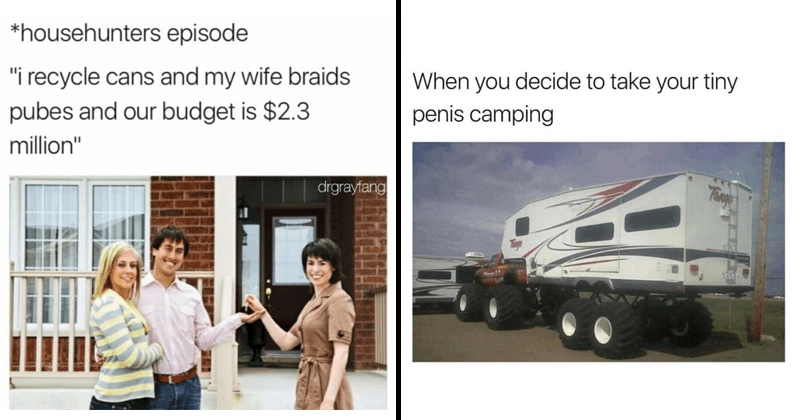 Car of the Day: This One Made of Chick McNuggets 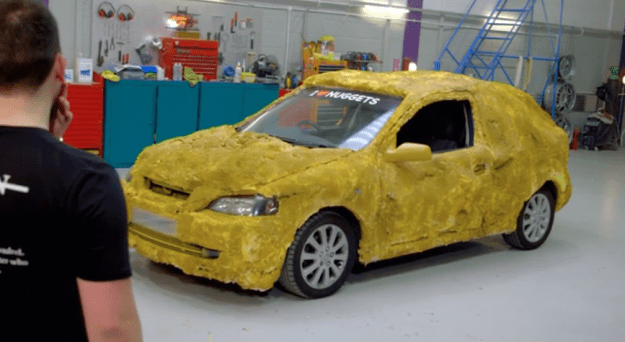 Q: What part of the chicken is the nugget? A: The carburetor.

The Frankenstein’s monster to Pimp My Ride’s Frankenstein, the E4 show Carjackers is the new thing we all have to worry about. On Carjackers, apparently, people have their car stolen by a loved one and turned into something horrible. Case in point, this woman turned her fiancé's car into a chicken nugget.

Let’s run that one again: Someone turned their fiancé’s care into a chicken nugget.

Sarah, the carjacker in question, decided that because her husband is “the chicken nugget man," he needs a “nugget mobile.” Just saying, if you’re future spouse is the chicken nugget anything, they should also be single again.

To be sure, the car looks awful and totally inedible. It’s the color of one of those foam pits you jump into at someone's gymnastics birthday party. Thankfully, you can’t smell through a TV set.

Also, to be sure that everyone knows what they’re looking at, i.e. not a car covered in scrambled eggs, it has a decal on the windshield reading “I <3 NUGGETS.”

Wait, they also turned a car into a giant dog.

Humanity, just when I think you couldn't possibly be any dumber, you go and do something like this.

Driver of the Day: Nobody Because Uber’s Self-Driving Cars Are Here

Wouldn’t be great if your Uber driver didn’t have to put their hands on the wheel and could spend all their time looking at their phone?

That Utopia is now a reality for San Fransisco users in need of a ride somewhere.

Uber, the ride-share company that has all sorts of problems with labor and drivers assaulting riders, is cutting out the driver entirely. They are launching a fleet of self-driving cars to pick people up and drive them to the airport.

Of course, there are still people in the driver’s seat for the time being, but it’s only a matter of time before Uber realizes that the car can just drive itself, hence the name “self-driving car.”

Actually, there's a spefic reason for the driver: Legal loopoles! Because they’re the bad boys of the ride-share industry, they don't have to follow the law for these cars, which aren’t really street legal yet.

According to NPR, “Uber has started offering rides in self-driving cars in San Francisco without a permit for autonomous vehicles — defying state regulators, who say the permit is mandatory.”

“Wired magazine suggests Uber is exploiting a loophole of sorts, noting that the regulations, as written, apply to cars that have ‘the capability’ of driving without a person monitoring them. Uber is effectively arguing that its cars' autonomy ‘isn't good enough’ to require a permit, Wired writes.”

Isn’t that great, putting your life in the hands of a company who exploits a loopole because self-driving cars are cool or something?

Car of the Day: This New Honda Has All The Feels, Literally

Wouldn’t it be great if your car could scream along with you in traffic, frustrate you when you’re lost, or whine when it needs some gas? Your wish is Honda’s command!

According to The Washington Post, “Japanese automaker Honda will showcase a concept car at the Consumer Electronics Show next month that is capable of understanding the driver’s emotions and developing emotions of its own.”

Drivers with road rage are gonna love this thing. 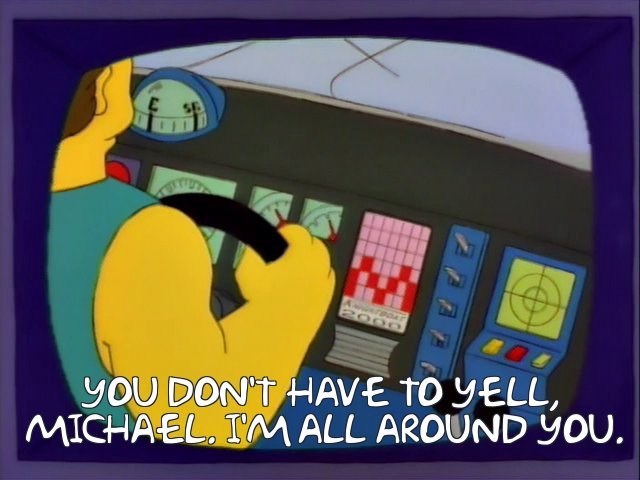 The car will harness “the power of artificial intelligence, robotics, and big data to transform the mobility experience,” says Honda (as well as every mad scientist in a movie about A.I. ever, but that’s besides the point). The concept car, called the NeuV, comes equipped with an “emotion engine,” an artificial intelligence that isn’t powered by your emotions, but rather learns from them.

“Honda expects the car will ‘grow up’ with its driver and share in his or her experiences, prompting the driver to feel the car ‘has become a good partner and thus form a stronger emotional attachment toward it,’” said The Washington Post in a terrifying sentence.

Honda will showcase this new concept car at the 2017 Consumer Electronics Show; though, it is unknown when it will be available for purchase, so the war against man and machine will begin.

Heart Attack of the Day: This Attempted Carjacking Video is a Real Life Fast and The Furious

Some people are born to be stunt drivers.

Take for instance, this driver from Albuquerque, NM. After dropping a friend off, he went out for some late e night Carl's Jr, when a red Chrysler 300 stopped in front of him. Confused, our would-be stunt driver begins backing up down the street and takes off across the streets of Albuquerque. It's nuts.

With the split screen created by the driver’s dashboard camera (one facing the windshield, the other facing the driver), you can get a sense of how intense this situation was. This seven minute is the best action movie of the year, and this dude needs a part in Fast 8.

Uber has officially decided that the people of Pittsburgh are disposable, as they have started using self-driving cars to pick people up there as their first test location. 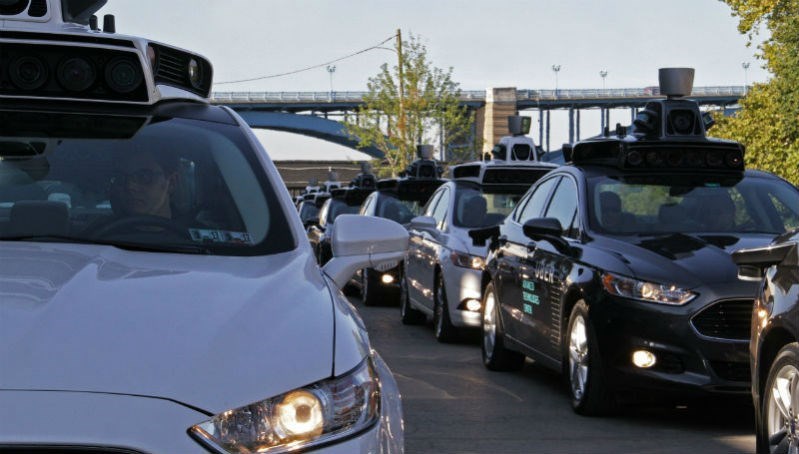 Pittsburgh is known for having dinosaur-sized potholes... 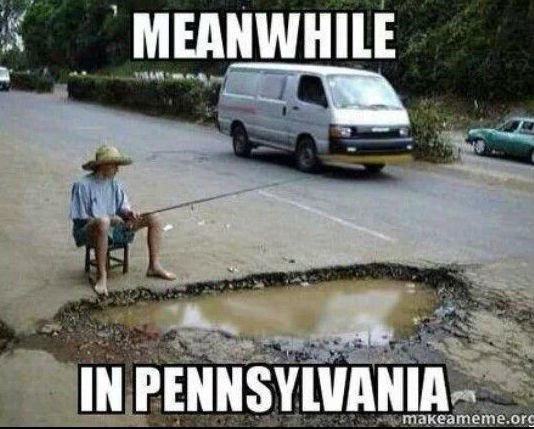 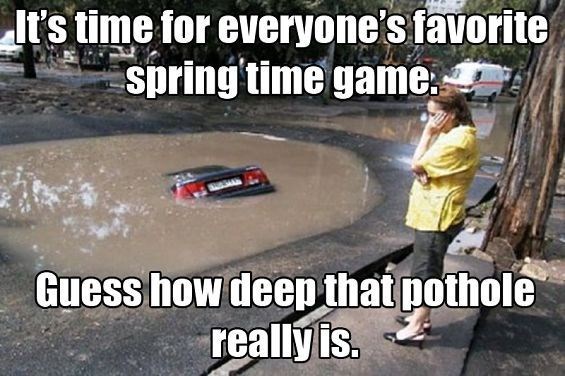 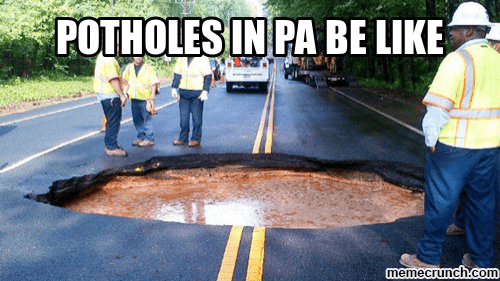 With Pittsburgh's confusing-to-navigate-roads, the cars (and passengers) def have their tests ahead of them. 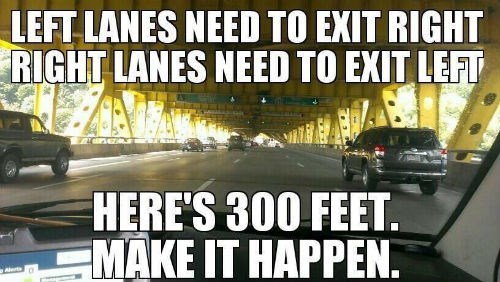 The reviews are in, and folks aren't pleased, but technology always marches onward... 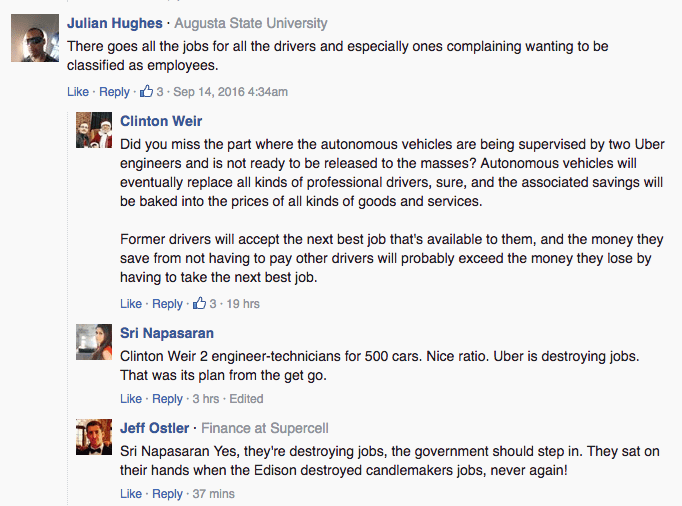 Hey, it could be worse I guess. 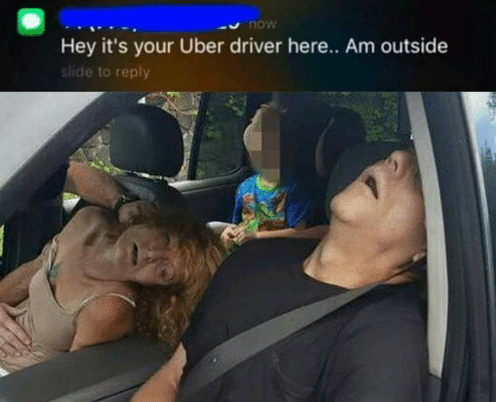 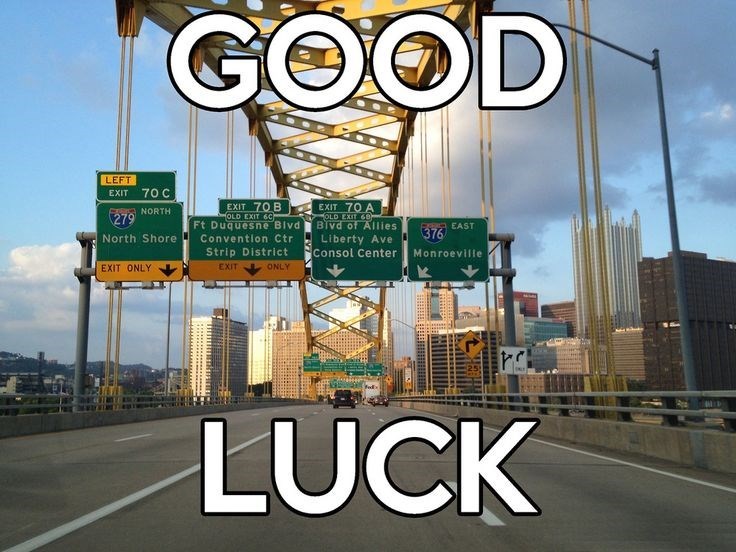