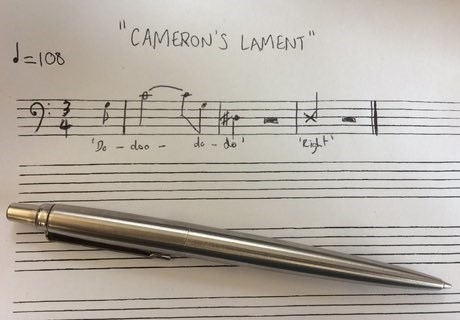 David Cameron was caught humming a little tune to himself shortly after he announced Theresa May would become the next UK Prime Minister.

Curious minds wanted to know WHAT Cameron was humming. Candidates included "Yes Minister", "The West Wing", "Shostakovich's 5th," "Winnie the Pooh," "Schools out for Summer", "The Final Countdown", and "The Great Escape".

Personally, I would opt to name it "Happy Exit". 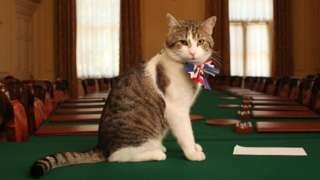 Larry the cat is to keep his job and home at Downing Street 10 after David Cameron leaves on Wednesday.

He was hired in 2011 as a mouser after a large black rat was seen scuttling past the No 10's front door in the background of a live TV broadcast.

A government spokesperson stated that Larry is a civil servant cat and does not belong to the Camerons.

Nice job security and no worries about the Brexit...

Remember PigGate? Twitter sure does. British Prime Minister David Cameron tried to tweet an innocuous photo of himself watching a space launch, but The Internet turned that into an opportunity to remind him of the time he porked a pig: 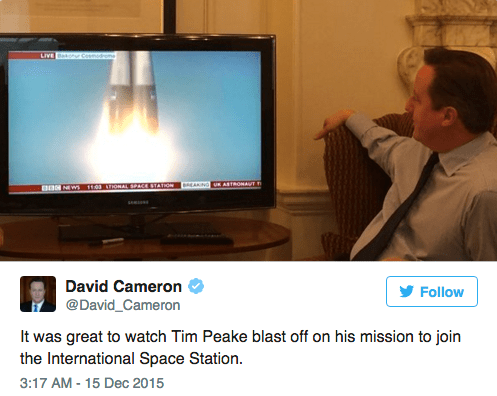 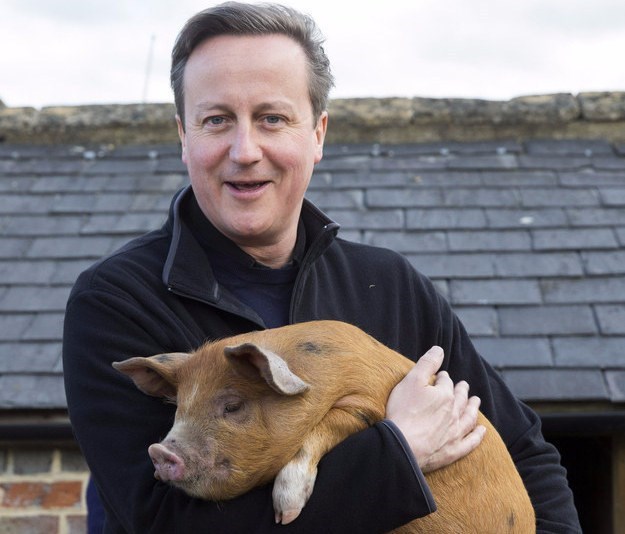 As alluded to by The Daily Mail, Cameron might have taken part in some pretty disturbing initiation rituals during his boyhood schooling at Eton.

A distinguished Oxford contemporary claims Cameron once took part in an outrageous initiation ceremony at a Piers Gaveston event, involving a dead pig. His extraordinary suggestion is that the future PM inserted a private part of his anatomy into the animal's mouth.

The source — himself an MP — first made the allegation out of the blue at a business dinner in June 2014. Lowering his voice, he claimed to have seen photographic evidence of this disgusting ritual.

The book's authors claim the source is a standing member of Parliament who grew up with Cameron at the time.

It just so happens that scenario is dreadfully close to the first episode of the British/Netflix show Black Mirror.

In that episode, called "The National Anthem" and written by show creator Charlie Booker, a man kidnaps a Duchess. He uses social media for blackmail, saying he will kill the woman publicly unless the fictional Prime Minister copulates with a pig on video.

It is just as hard to watch as it sounds and apparently semi-close to alleged truth.

All of this has spawn the Twitter hashtag #PigGate, which stood at the top of global trending through the night of Sept. 20 and into the morning of Sept. 21.

BBC news says "The former Tory donor admitted to having personal "beef" with the prime minister …" #piggate just gets weirder and weirder.

What kind of world have you put me in, cruel Fate, when the words 'necro-best*ality' and Prime Minister can share the same sentence #piggate

Parody of the Day: David Cameron Raps His Press Conference

Going through all those boring speeches must have sucked.

David Cameron Called President Obama Earlier Today, And According to Twitter, They Had a Rather Interesting Conversation

"I hear rubbing alcohol is supposed to make it come unstuck..." 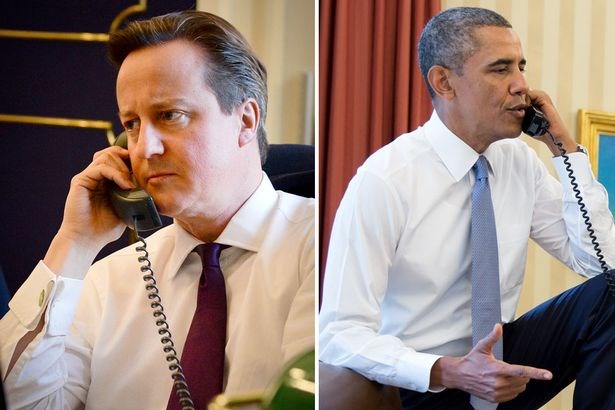