You can stop stringing up those lights and nailing that Santa to your roof, because this street officially wins Christmas.
A stretch of more than 16 homes in Yucaipa, Calif. coordinated their holiday displays, which light up to music, and the entire show is being captured via drone.
"The Manning Street Christmas Music Light Show", as it is called, runs daily, and people in the area can park their cars and tune into 92.5 FM to experience it.
Coordinator Jeff Maxey uploaded a few different demo videos to his page. In addition to Mariah Carey's "All I Want for Christmas is You" (above), watch the homes perform "Wizards in Winter" by the Trans-Siberian Orchestra.

You Saw This Coming of the Day: TGI Fridays Drone Crash Lands on Woman’s Face

Come for the mozzarella sticks, go home with a bloody nose.
TGI Friday's "Mobile Misteltoe" has had its first casualty, crashing into a woman's face a chipping off a piece of her nose, according to Brooklyn Daily.

The two remote-controlled helicopters dangling sprigs of mistletoe were intended to spread holiday romance, but one of them flew out of control and clipped Courier photographer Georgine Benvenuto in the nose with one of its spinning, uncovered blades.

The drone operator was attempting to land the device on the reporter's hand, when it veered off and hit Benvenuto.

TGI Friday's says it hasn't had any other accidents in its test flights, and that it's safe because ""we do not let consumers touch it."
The drones are part of a marketing campaign by the restaurant chain in which the devices fly above customers heads while they eat, forcing them to kiss.
The bloodshed is just an added bonus… because drones will be drones! 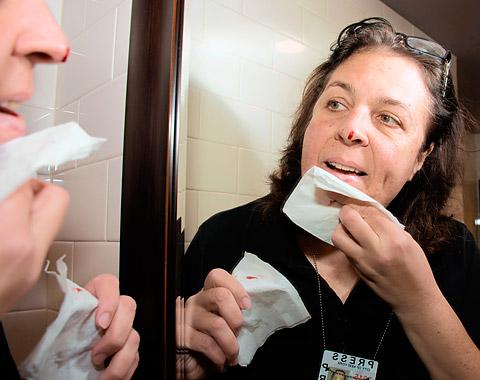 Epic Battle of the Day: Drones and RC Cars Fight to Save Teddy Bear

This is what drones were really made for.
Visual effects team Corridor Digital has produced an action packed video about a bunch of Parrot drones and remote controlled cars battling "battery bandits" to save the life of their teddy bear friend.
Think "Toy Story," but with a lot more explosions and some '80s montage music.
You can watch the creators talk more about the drones use in the video and how it was made here.

Drone Footage of the Day: What Chernobyl Looks Like in 2014

As part of a recent story for "60 Minutes," filmmaker Danny Cooke shot this haunting footage of Chernobyl and the abandoned city of Prypiat in Ukraine.
The nuclear meltdown was 30 years ago, but the reactor, which was simply buried in a tomb, is still very dangerous. According to the CBS report, there is a project underway to come up with a more permanent solution, but it's three quarters of a billion dollars short of its goal.
Cooke calls it "one of the most interesting and dangerous places I've been."

OK Go is back with a new video for their single "I Won't Let You Down," and it's as over the top as you might expect.

Always seemingly trying to one-up themselves, their latest masterpiece is shot via drone, and follows the guys on robotic unicycles as they partake in a massive, synchronized umbrella dance.

Not a Fan of Quadcopters and Drones? Neither is This Badass Hawk

Gif of the Day: Drone Selfie

The Future is Now: Pizza Delivered By Drone in Mumbai

Fail of the Day: The Portuguese Navy Could Learn a Thing or Two More About Remote-Controlled Drones

Drone News of the Day: Amazon CEO Apologizes for Drones...Sorta

Amazon founder Jeff Bezos (played by comedian Dartanion London) apologizes for any fear the Prime Air drones might be causing and clears the air (so to speak) on any misunderstandings about the new delivery method.

Drone Madness of the Day: A License to Kill...Drones 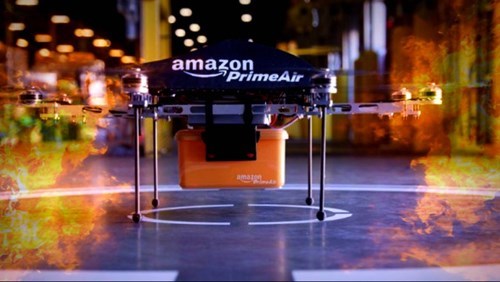 An upcoming vote will decide whether citizens of Deer Trail, Colorado will be able to possess a $25 license to hunt drones. Successful hunters will be also be awarded a $100 bounty if they can provide a piece of a shot-down drone.

Unmanned Aircraft of the Day: Amazon Drones Will Soon be Delivering Your Orders

Online shopping Giant, Amazon has recently unveiled "Prime Air," a drone delivery system that the company promises will get your order to its customers in 30 minutes or less. Amazon predicts that seeing Prime Air drones will eventually be as common as seeing delivery trucks on the road today.