Maine coons are absolute units and we're obsessed with them. They're simply larger cats so there's just more to love! That's how we see it anyway. All that extra floof just makes us want to press our faces into those giant bellies.

Maine coons are always such a pleasure to look at, it's the closest we humans can get to having our very own wildcat indoors, size-wise. Cats of every size are also close and we love them just as much.

However, there is a grandness, a royalty that Maine coons seem to possess. They are truly magic sorcerors who can hypnotize us and honestly, we'd totally let them. Get ready to be wowed by the grand and majesty beauty of Maine coons! 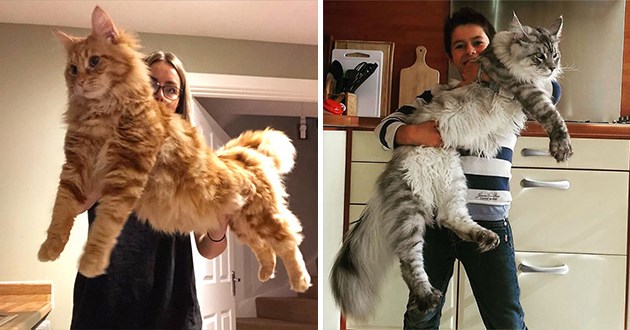 Animals Of Instagram Spotlight Of The Week: Cocoa Puff The Giant Rabbit

Once a week, we will be featuring an extraordinary animal account on Instagram! Their story, the adorable pictures, and pawesome videos! This week's spotlight goes to Cocoa Puff, the giant rabbit!

And when we say giant, we mean it. Cocoa Puff has over 340k followers of Instagram, making him not only a giant rabbit but a giant star. Cocoa Puff is what's known as a "Continental Giant," at the age of 2, Cocoa Puff weighed 18.5lbs.

And hilariously enough, when a fan online asked why they decided to name him Cocoa Puff, the answer was that Cocoa Puff's poops resembled the classic Cocoa Puffs cereal.

Not sure we can look at Cocoa Puffs the same ever again! Thankfully, Cocoa Puff was litter box trained. He was also a cage-free animal.

His owners sadly shared the news of his passing at the end of June.

This week's spotlight goes out to Cocoa Puff, we know you're still delivering big smiles wherever you are! 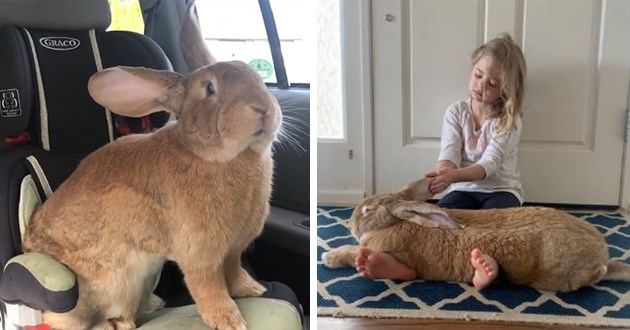 Meet Knickers, Australia's biggest cow. He is apparently so big he cannot be slaughtered so is now living out his days as a "leader" for younger cattle in Australia's Southwest. Check out some of the funniest jokes about this giant creature. 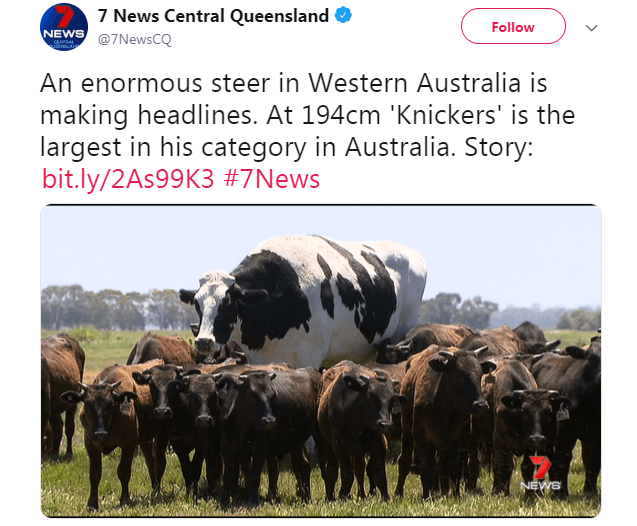 Vivian the Dog Moves to Brooklyn is a children's book penned by artist Mitch Boyer. Taking inspiration from his own life, the story details the adventure of a massive dachshund relocating to the big city with his owner. Modelling his own pup, Boyer uses photoshop to create the effect of a huge dachshund that is similar size to his owner. Now, Vivian is almost the same height as the six-foot plus Boyer, and the photographs are truly adorable. 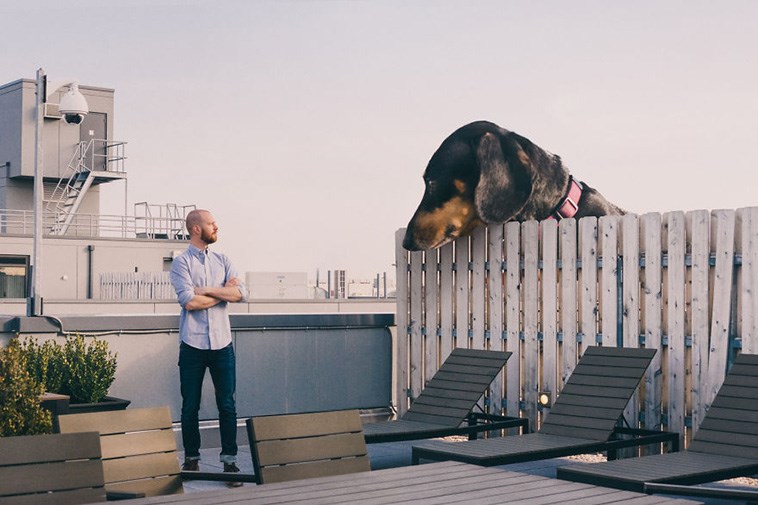 Check out this series of haunting, dreamlike photos by artist Ebenism. Via: Ufunk 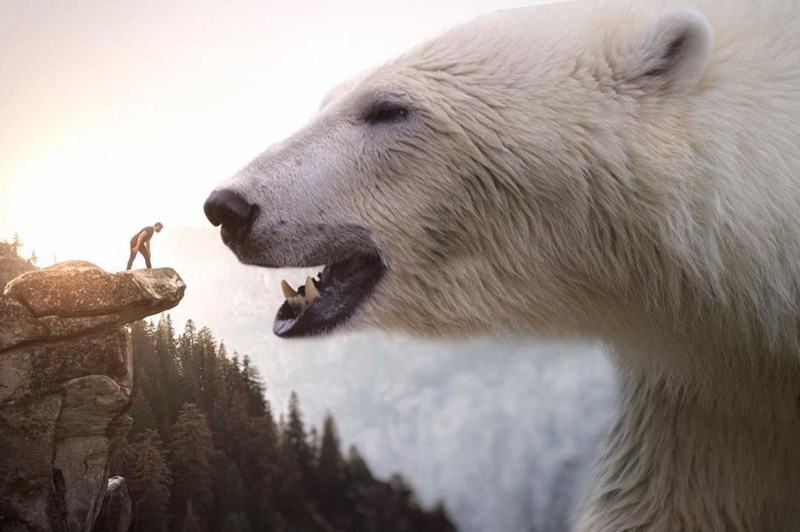 Scientists Just Discovered That Penguins Used To Be Human-Sized

Penguins aren't exactly formidable creatures, are they? Although Emperor penguins can reach up to 4 feet 2 inches, they always seem super friendly and cute. Now imagine a penguin the same height as you. That changes things. Penguins the size of humans... the idea sounds like it comes from science fiction. But it actually just comes from science. It was recently discovered that giant penguins used to exist. We are not kidding. 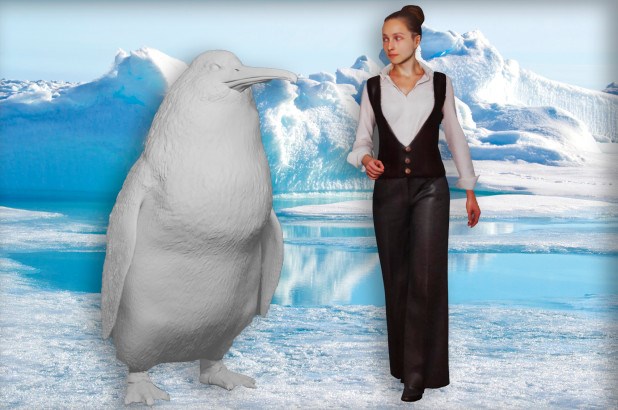 You can say that the artist, Petechka Odnobokov (Peter, for short), is larger than life! Peter places these images of giant cats (who you may have seen circulating the interwebs) in urban, and not so urban landscapes. A man with glasses and a beard is also present in each and every photo, this is Peter himself!

Peter is always looking at ease and relaxed in the pics as the giant felines roam about (or nap about). Peter writes under one of the photos, a photo with cats is a peculiar way of communicating with the world around him. This allows you to draw a bridge between his total isolation from childhood and the outside world with other people.

The world he has created is certainly better than our reality! 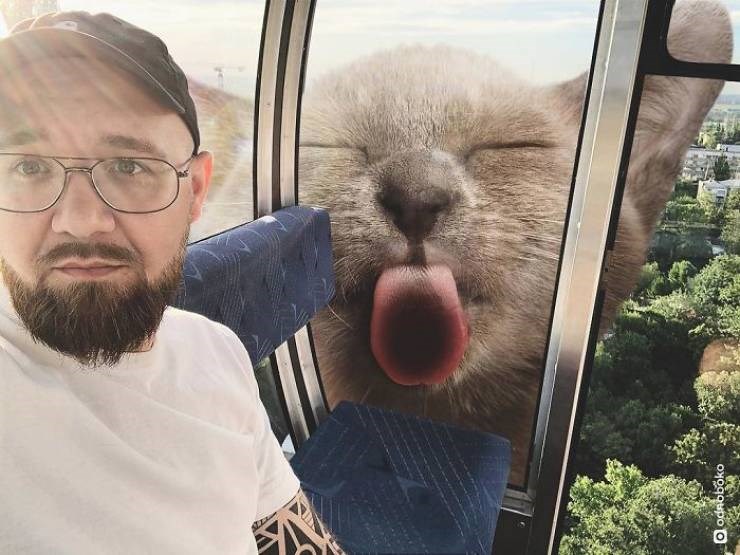 Via The Daily Mirror
Repost
Recaption

There’s a lot to worry about in the world, but if you live Sri Lanka, meet your worst nightmare. The Wildlife Department found a huge, HUGE crocodile in Matara, Sri Lanka, and it could probably swallow you whole. Lucky for you, it would probably chew quite a bit, making this thing all the more scary.

Weighing close to a ton, this croc was found stuck in a canal off the Nilawala River, all 17 feet of it. That’s right, 17 feet. How tall are you? 5’5? 6’5? Even if you were Shaq reading this — which if Shaq is reading this: Hello, Shaq — you’d still be about 10 feet smaller than this bad boy.

The Wildlife Department pulled the crocodile out and sent it on its way. So long, gigantic crocodile. May your next meal not be a person. 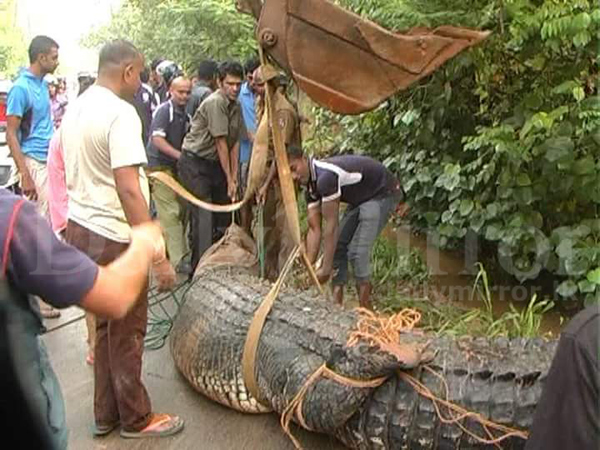 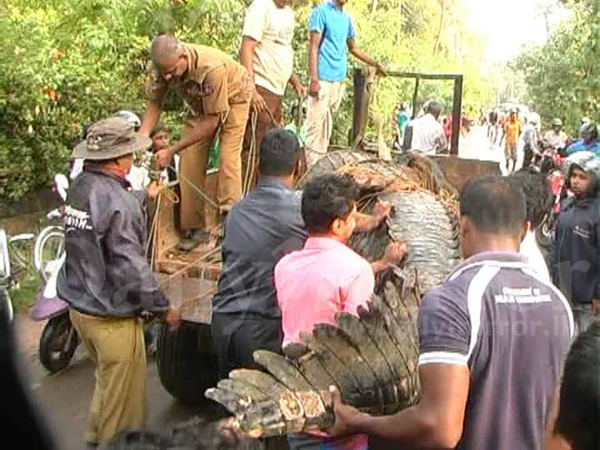 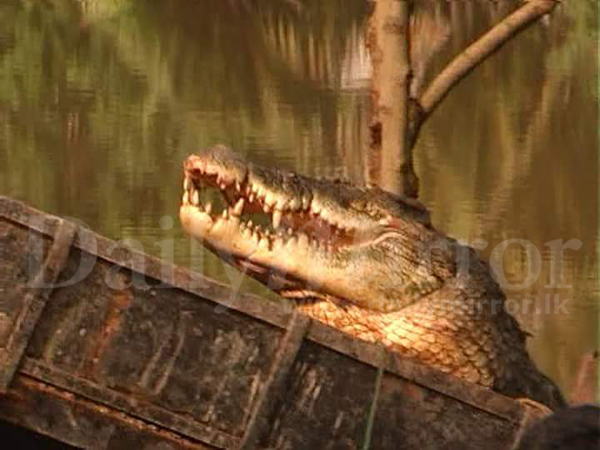 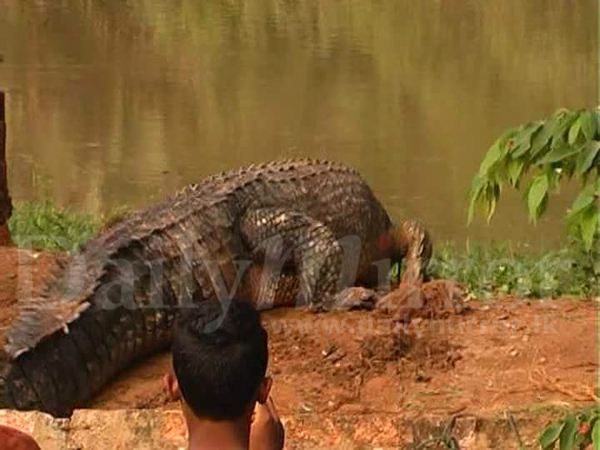 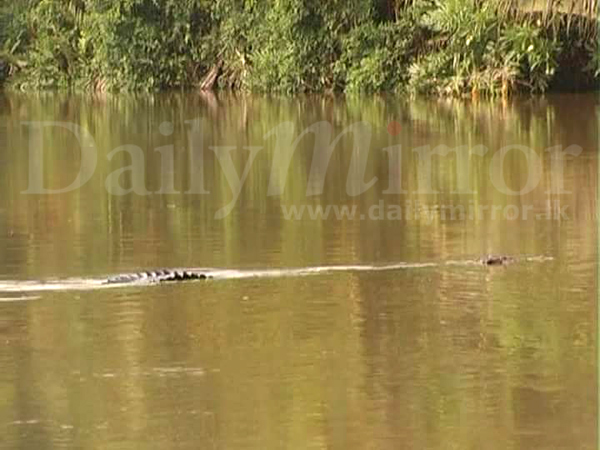 Saved By Sex of the Day: Diego the Tortoise Probably Gets Laid More Than You Do

He is over 100 years old, weighs about 175 pounds, is nearly 35 inches long, five feet tall, and the ladies love him. His name is Diego. Diego the Chelonoidis hoodensis Galapagos giant tortoise. 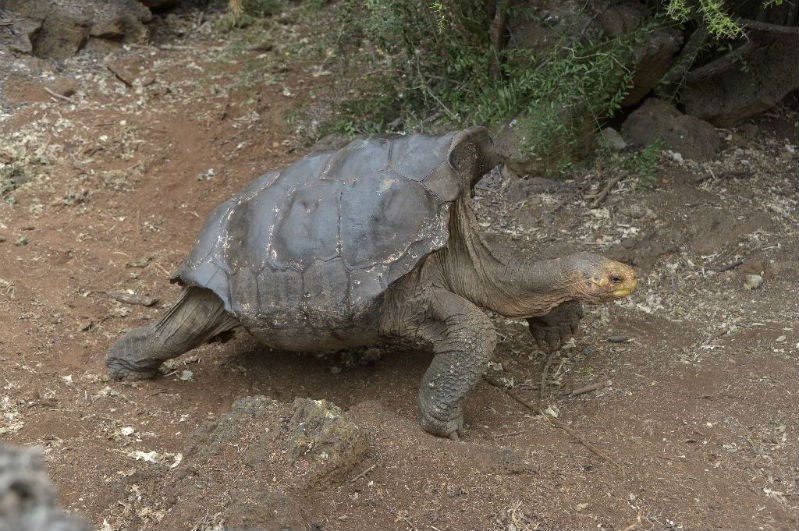 According to Washington Tapia, a tortoise preservation specialist at Galapagos National Park, Diego "has fathered an estimated 800 offspring, almost single-handedly rebuilding the species' population--and saving it from extinction--on their native island, Espanola, the southernmost in the Galapagos Archipelago."

"Around 50 years ago, there were only two males and 12 females of Diego's species alive on Espanola, and they were too spread out to reproduce."

Six years ago, they did a genetic study and discovered that Diego was the father of nearly 40 percent of the offspring released into the wild on Espanola, thereby doing more parenting than any other turtle to repopulate the species. 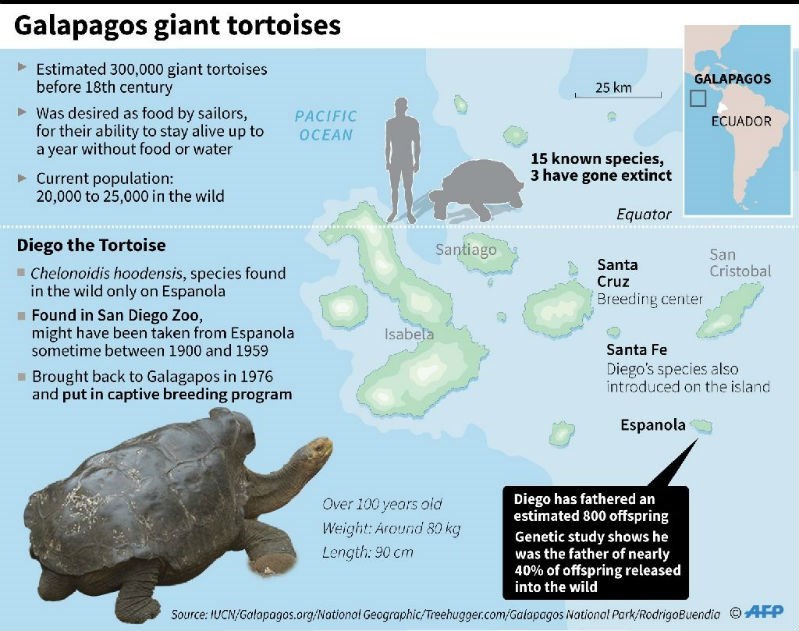 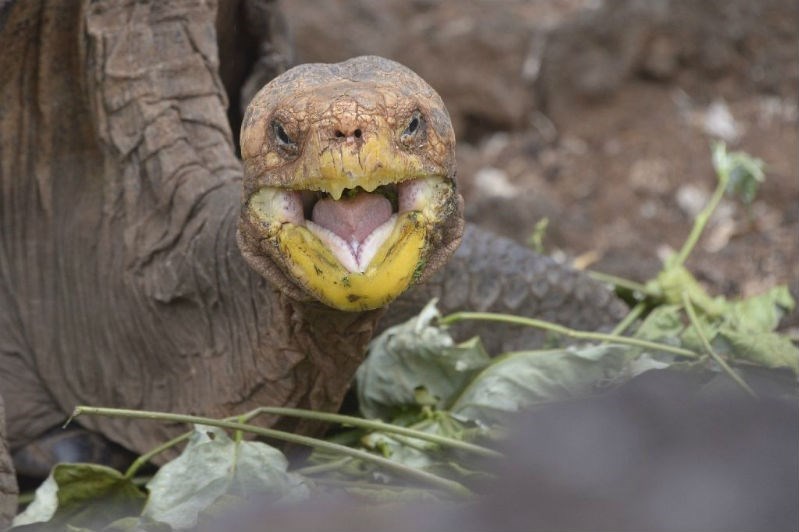 A Florida Golf Course Is Home to a Giant Alligator, and Apparently That's Totally Normal

This monster was spotted lazily strolling around at the Buffalo Creek Golf Course in Palmetto, Florida. A pro shop worker for the golf course, Wendy Schofield, told 3 News that he's been there for a while. She said, "He doesn't bother anybody and they don't bother him, he's like a mascot for the course, which is owned by Manatee County."

So it's fine that basically a dinosaur is roaming around the golf course. Let's just hope that someone doesn't get eaten trying to take a selfie with him now that his existence has gone viral.

The Titanosaur, a 122-Foot-Long Dinosaur Skeleton Has Been Revealed at American Museum of Natural History

This is one of the largest new dinosaurs ever discovered. It's so new, it hasn't even been formally named by paleontologists.  It probably weighed about 70 tons.  Now a cast of the bones is on display at the American Museum of Natural History.

Here's a video of how they put it all together:

The Chinese salamander is a very rare nocturnal salamander that lives in lakes and streams in the mountains of China. This one is believed to be at least 200-years-old. It measures 4 feet 7 inches long and weighs 104 pounds. These animals are becoming increasingly endangered due to habitat loss.

Maybe that's why this giant was found in a cave in Chongqing Municipality in China. He's since been transferred to a research facility. You can really tell how big he is here with a scientist for scale: