Meet Taylor and Danielle, whose epic love story has inspired people to donate more than $250,000 to help pay for Taylor's rehabilitation after he was severely wounded in Afghanistan in May. 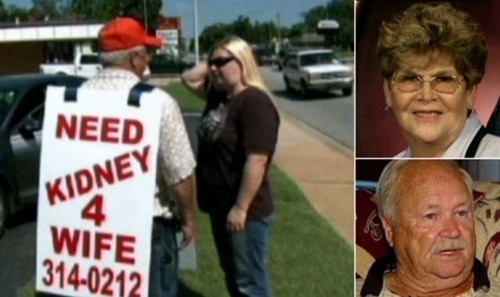 "I didn't know what to do," Swilling said. "I thought of this Tuesday night. Had (the sandwich board sign) made. I'm walking town to town and will walk back if I can make it."

Swilling said that by Sunday, he had six pages of names of perfect strangers willing to be tested for a match. But he'll keep walking the streets in his sandwich board until he finds one:

"I'm going to save my wife and that's what I want… I love her more now I believe than when I married her because we're not two, we're one."

Eight months later, his mom, April, is a puddle of tears when she hears his heartbeat once more -- in the chest of Kentucky doctor Charles Shelton, whose life was saved by Caleb's donation. 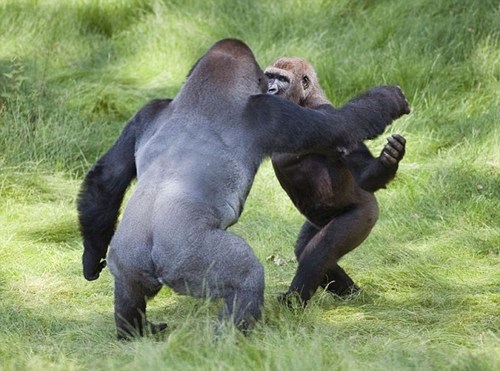 Long-lost silverback gorilla bros Kesho and Alf were reunited this week after spending nearly three years apart -- and it was brotherly love at first embrace, according to staff at Longleat Safari Park in the U.K.:

We weren't entirely sure that the brothers would even know each other, (Kesho has gained 200 pounds!) but the moment they met you could just see the recognition in their eyes. They were touching each other through the cage that temporarily separated them and there were no acts of aggression. We put them together 24 hours later and it was like they had never been apart. 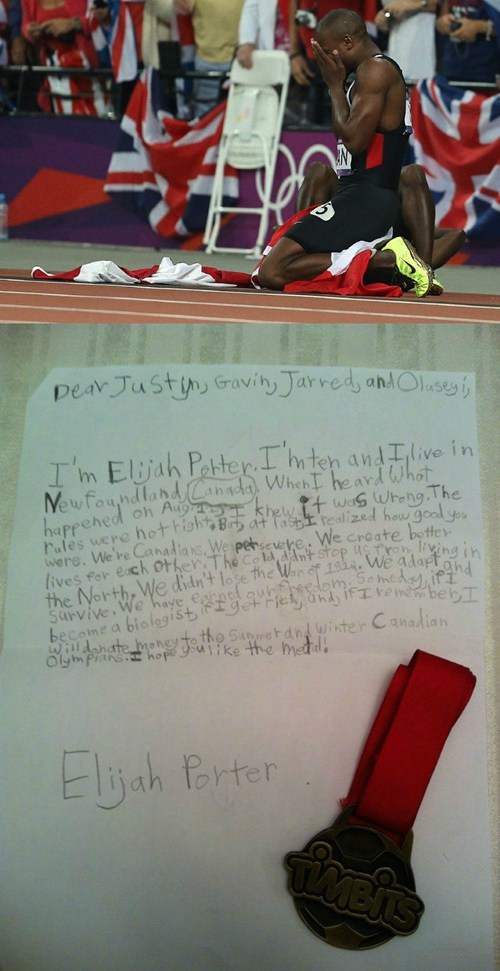 Then the team was disqualified for running outside the lane, and Elijah, devastated, wanted to help ease the pain for runners Justyn Warner, Gavin Smellie, Jared Connaughton, and Oluseyi Smith.

So he sent them a letter:

Dear Justyn, Gavin, Jarred [sic], and Oluseyi, I'm Elijah Porter. I'm ten and I live in Newfoundland, Canada. When I heard what happened on Aug. 11, I knew it was wrong. The rules were not right. But, at last, I realized how good you were. We're Canadians. We persevere. We create better lives for each other. The cold didn't stop us from living in the north. We didn't lose the War of 1812. We adapt and survive. We have earned our freedom. Someday, if I become a biologist, if I get rich, and, if I remember, I will donate money to the summer and winter Canadian Olympians. I hope you like the medal! Elijah Porter

Elijah included with the letter his medal from a soccer clinic sponsored by Tim Hortons.

On a day when the Honey Badger's dismissal from LSU dominated college football headlines, it's awesome to see a player get rewarded for their hard work. Marc Panu is a four-year walk-on at Vanderbilt, and during a team meeting on Wednesday, head coach James Franklin presented a highlight package to the team -- followed by a scholarship. Bravo!

Kickass Uncle of the Day

YouTuber greatwhitebenja may be far from home, but when it comes to his sister's son Cade, he's a man with a plan:

I only get to see my nephew about twice a year because I am in the military, so today I emailed my sister some lines for him to get on videotape so we could do a little project together.

Their little project -- called "SuperNerds: Call Cade Maybe" -- involves rescuing the president from a hostage situation, and of course Cade gets to save the day.

Emma is 2 and suffers from arthrogryposis multiplex congenita, a rare condition that makes it nearly impossible for her to lift her arms.

Enter the specialists at Alfred I. du Pont Hospital for Children in Wilmington, DE, who custom-fit a 3D-printed Wilmington Robotic Exoskeleton for the toddler.

Emma is back in business, and we're blinking our eyes in amazement. Technology can be beautiful.

The staff at Seattle Children's Hospital is back with another heartwarming tearjerker -- and darn if isn't tailor-made for us softies:

Maga is a cat-loving teen patient with cancer at Seattle Children's Hospital. She's had to be in the hospital many times, and during her stays what she misses most is her own cat Merry. We asked our Facebook fans to share their favorite cat photos with us, and got an awesome response -- 3,000+ photos! We used these pictures to create this "cat immersion" for Maga -- an audio/visual experience to bring thousands of "virtual" cats to Maga's room. 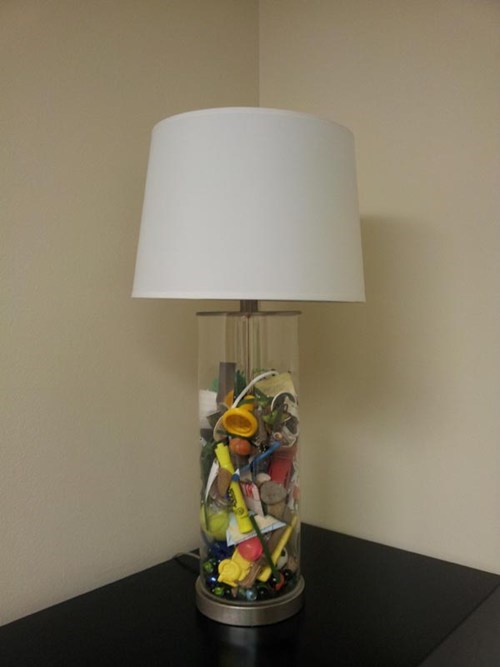 Redditor justgrant2009 recently received one of the most thoughtful gifts in the history of parenting:

This lamp has everything my mom ever found in my pockets when doing laundry for me when I was little. She gave it to me at my wedding.

Don't miss the "awww"-inspiring pic gallery, which offers close-ups of rocks, marbles, various small balls, and other detritus of a boy's life.

In anticipation of her 9th birthday, Rachel Beckwith informed her mom that she didn't want presents; instead, she asked friends and family to donate $9 to charity: water, so that kids her age in Africa would have clean water to drink.

She fell shy of her goal of $300, which is enough to give 15 people clean drinking water. But she pledged to do better when her 10th birthday rolled around.

Tragically, Rachel was killed in a car accident in Seattle just a month after turning 9.

News of the tragedy -- and Rachel's birthday wish -- made it around the world, and some 30,000 people gave more than $1.2 million to Rachel's campaign.

Her mom, Samantha Paul, was blown away:

It made me realize how blessed I am even though I don't have Rachel with me anymore.

And so on Monday, exactly one year after Rachel's death, Paul continued her daughter's campaign with a visit to a village in Ethiopia, where local partners were using funds from Rachel's campaign to drill wells.

They also had commissioned a marble sign to honor her:

Rachel's great dream, kindness and vision of a better world will live with and among us forever.

Sixty thousand people in more than 100 villages will drink clean water because of Rachel's wish. 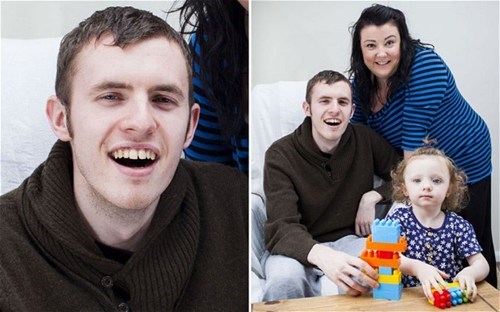 Mark Ellis suffered a stroke at the age of 22, and subsequently developed locked-in syndrome -- he was completely paralyzed and unable to speak, but his mind was unharmed.

But just weeks earlier, his wife Amy had given birth to their daughter Lola-Rose. Despite being given a slim chance of survival, Amy Ellis says her husband eventually regained the ability to talk, move, and walk by mimicking his infant daughter:

He started to make the same sounds, and then the words came too. There wasn't much time between him and Lola-Rose both taking their first steps -- I think Mark took his first steps a week or two after Lola. They use toys, books, games and the iPad together to learn how to do things and communicate. Doctors didn't expect him to survive but his youth and mental strength have helped him pull through.

Amy Ellis says that despite her husband's recovery, they support the family of Tony Nicklinson, who has suffered from locked-in syndrome for seven years and last week took his fight for the right to die to court.

The "My Wish" series returned to ESPN this week for its seventh season, and the newest episode captured 10-year-old Donovan Troy, who suffers from sickle cell anemia, hitting the recording studio with his favorite NFL player, Philadelphia Eagle DeSean Jackson.

After the Eagles practice, DeSean completely surprised Donovan with an invitation to go to a recording studio in downtown Philadelphia to write and record a rap song. Music producer/audio engineer Mike Jerz played a few different beats he created and Donovan selected his favorite. DeSean wrote lyrics that were Eagles-themed and pretty soon Donovan donned some headphones and hopped in the booth with DeSean to start rapping. DeSean called Donovan "Jay-Z in the booth" at one point. ... Donovan was thrilled to play catch with Eagles' quarterback Michael Vick. He didn't drop one pass, which included a high-arcing, 25-yard strike. Donovan impressed Vick with his best DeSean touchdown dance after that catch.

After 5 years of building a relationship through video games, facebook, and a webcam we both get to see each other for the first time.

These never get old. 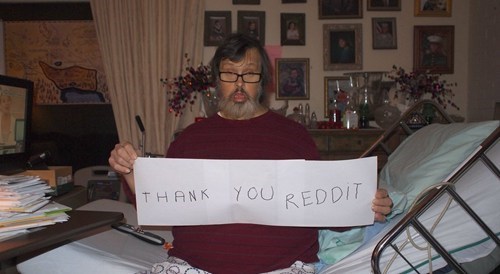 Remember Scott Widak, the man with Down syndrome who was terminally ill with liver disease, and whose nephew Sean O'Connor posted Widak's address to Reddit this past spring?

"One of my uncle's favorite things to do is open mail, and I thought that if he got a lot of mail it would cheer him up."

Widak died Saturday, and O'Connor returned to Reddit with an update -- and with a beautiful Imgur album that captures the last months of Widak's life, and the letters and gifts he received from all over the world:

Thank you reddit for thinking of my uncle. He will surely be missed... His general cheerfulness did decline a bit as he got more ill, but his happiness didn't fail to shine through at times no matter how sick he got.