15 Of The Most Tremendous Donald Trump Memes

One does not simply become president, without generating some Trump memes.

15 Trump memes mixed in with about a dozen or so Trump GIFs -so as to cushion the impact some of these may have on our more sensitive readers. Whether you love him or hate him, you've gotta admit that Donald Trump is incredibly meme material.

"We'll build a Trump meme, and make the Memeians pay for it"

Need more Trump memes? There's an abundance of Trump memes available at your disposal, such as Trump's Space Force memes or Hilarious Trump Space force memes which was related to announcing that America will be militarizing space, or the awkward memes of Trump staring at a solar eclipse or  Memes of Awkward Obama/Trump Interactions. Or wax nostalgic with photoshop memes of Trump's Executive Orders which were changed to look like a variety of hilarious scenarios that Trump has just signed. And for a simpler, more sophisticated laugh, try the Trump and Kim memes that really have a nice subtle nuance to their humor.

Donald Trump seems to be a magnet for being the subject of memes, and it really is not slowing down. Not much anyone can do to stop it so might as well sit back and laugh, regardless of where you stand politically 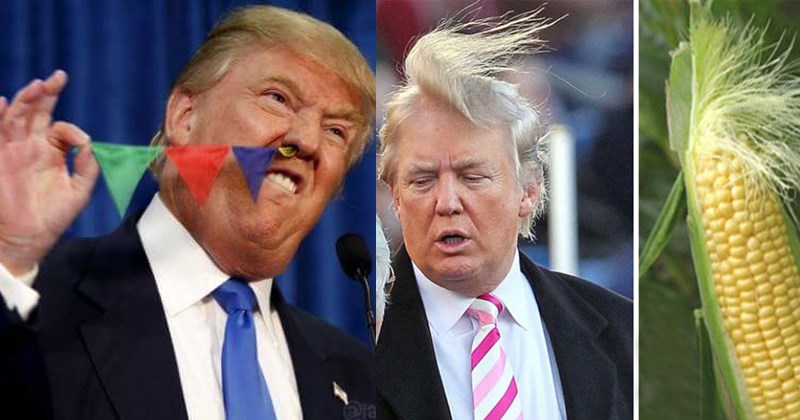 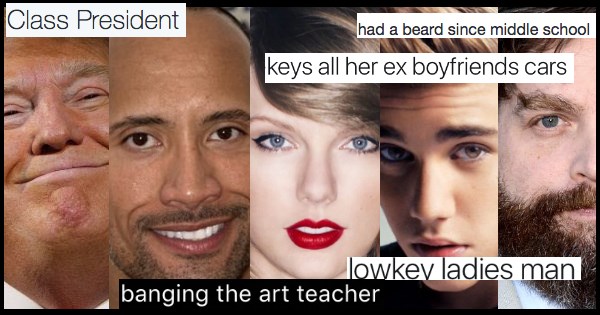 This photo from 2012 resurfaced recently when Ellen Degeneres asked Christina Aguilera on her show to confirm what we all already knew. The presidential hopeful was indeed staring at Aguilera's "bosoms", as she put it. That sparked a bountiful photoshop battle. 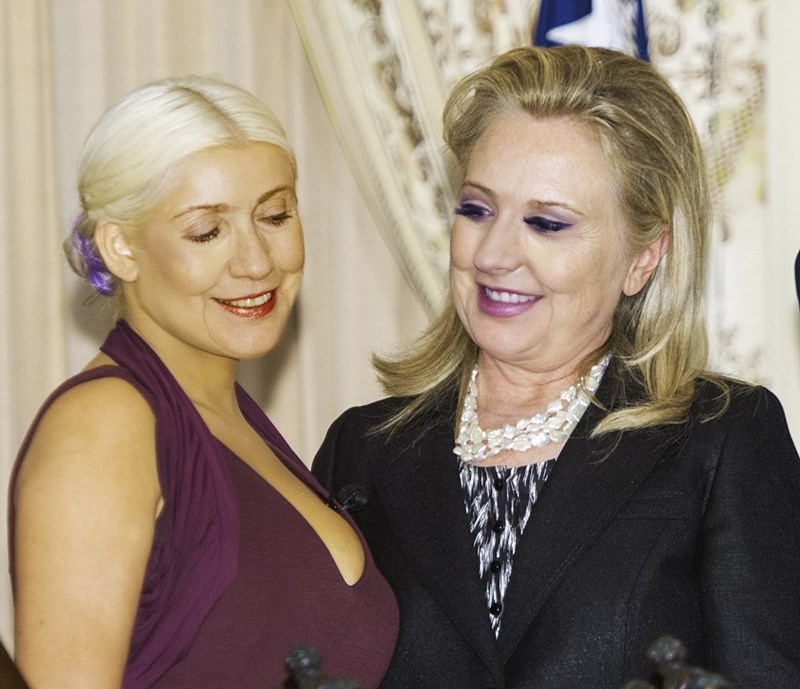 Hillary Clinton out here tossing all the shade, following a new report by the Justice Department's Inspector General regarding her emails. Let's just say the proverbial mic has been dropped. 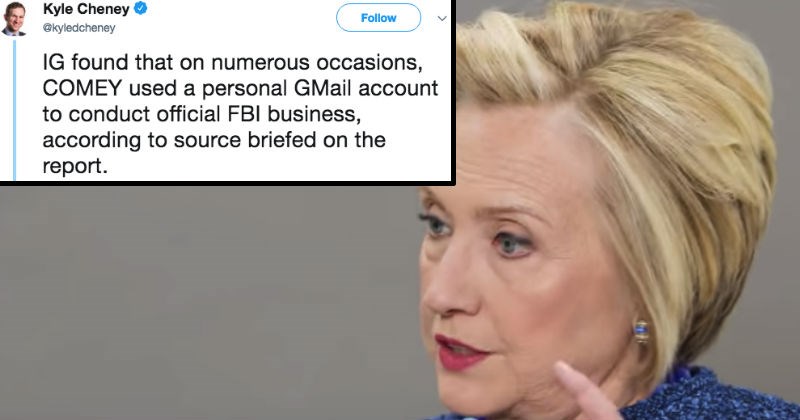 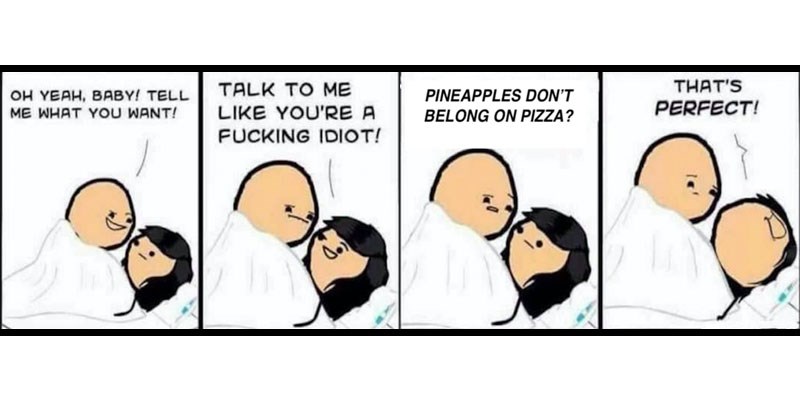 A woman hurled a shoe at Hillary Clinton on Thursday during a speech in Las Vegas, according to the Secret Service. Clinton was giving a speech on recycling trade before the Institute of Scrap Recycling Industries, when a woman who wasn't on the guest list hurled a shoe toward the stage. Secret Service took the woman into custody immediately afterward.

"My goodness, I didn't know solid waste management was so controversial," Clinton said. 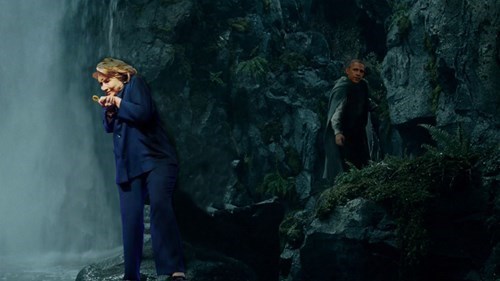 Ms. Ariana Grande did not have a good day at Aretha Franklin's funeral, which was held last Friday. Between being inappropriately touched by a church leader on live television (which we won't even get into), to being creepily stared at by former president Bill Clinton, it's safe to say that poor Ariana probably went through a pretty rough time.

That being said, pics of Bill Clinton staring at her have gone viral, and people have been making them into excellent memes that make fun of the former president's, shall we say, appetite for ladies that aren't Hillary? 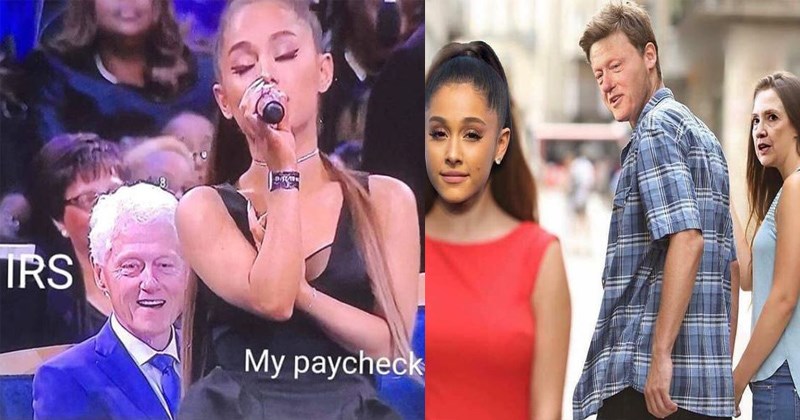 One of Donald Trump's tweets recently came under fire for anti-Semitism when he used a six-pointed star to call Hillary the "most corrupt candidate ever." The graphic was switched to circle, but the story doesn't end there. On Wednesday evening, Trump came back with a picture of a 'Frozen' sticker book with a red six-pointed star on it. "Where is the outrage for this Disney book?" Did you have to ask, Donald Trump? Because you knew the Internet would respond. #Frozen 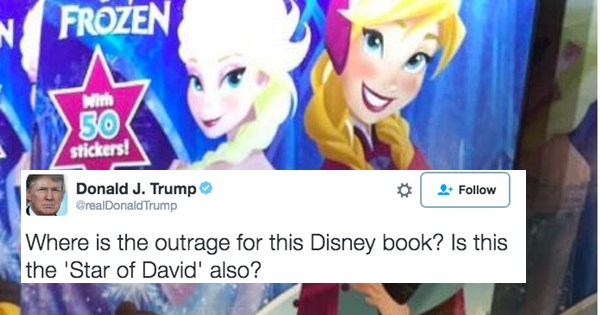 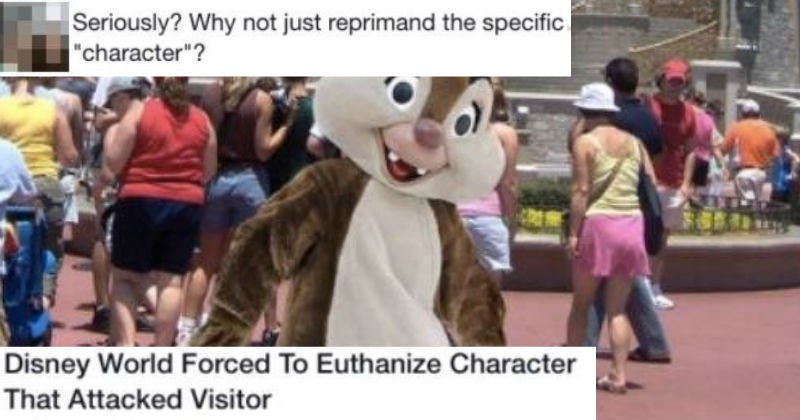 Jeffrey Epstein was found dead in his cell on Saturday morning, allegedly by suicide. While the media announced that the sex offender and financier had hung himself, the internet is not as convinced. Most people share the sentiment that he was in fact killed by someone with a whole lot of power. Here are the best conspiracy theory memes that play largely on Epstein's connections with the Clinton and Trump administration, the Clinton body count, and the accusations that many more people were involved in the wealthy man's sex trafficking operation. You don't need to drink the conspiracy theory Kool-Aid to find these funny memes entertaining, so make up your minds for yourselves. 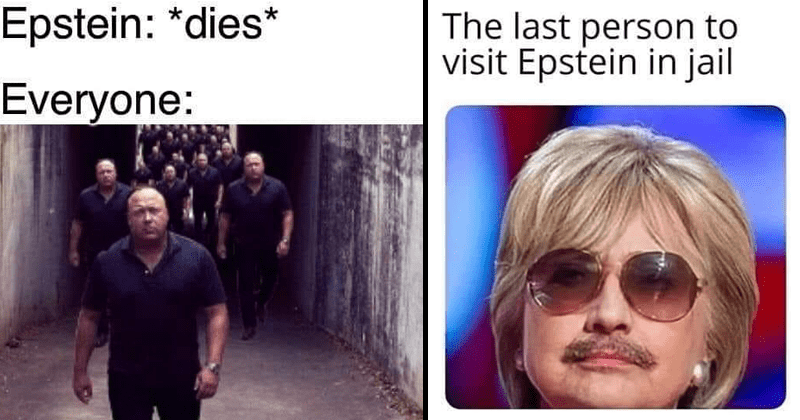 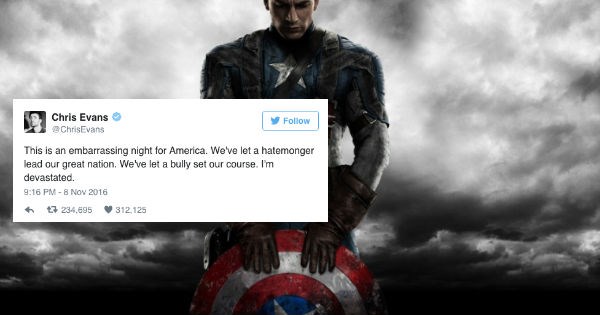 Candidate of the Day: A Depressing Amount of People Voted for Harambe 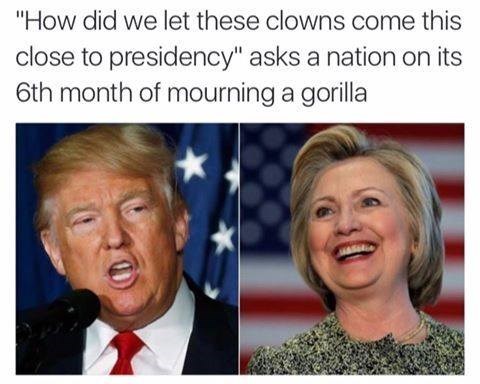 If you live in the United States, you have a new president. The people have spoken, and they said that billionaire, reality TV-show host Donald Trump is how they want to ride out the next four years.

Look, this was a divisive election, and a very close one at that. As has been said many times, this wasn’t necessarily the time for a protest vote for, say, Jill Stein or Gary Johnson, but that doesn’t mean the Internet can’t find another third-party spoiler to bring America to its logical conclusion and elect a billionaire, reality TV-show host. 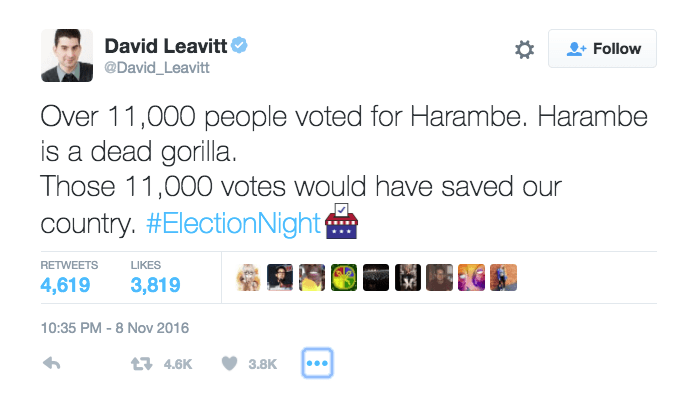 The Internet, because its nothing if not predictable, chose a new candidate: Dead-gorilla turned confusing-meme, Harambe.  That’s right, the gorilla who was shot dead after a child fell into his pen at the zoo received 11,000 votes in last night’s election. And that’s how game-show hosts are elected president, when people write in memes to be president.

So there you have it, folks. Reality TV-show host is president, and I am now this Tweet: 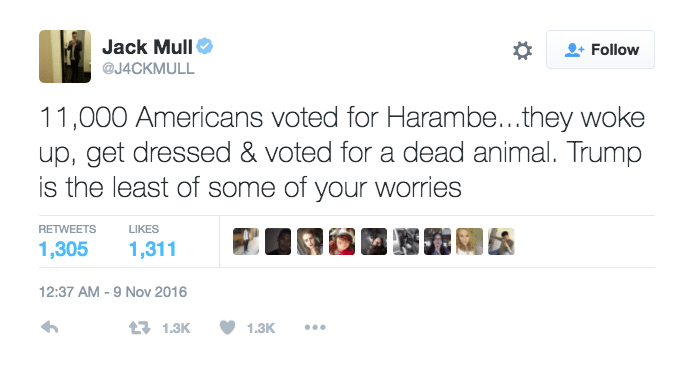 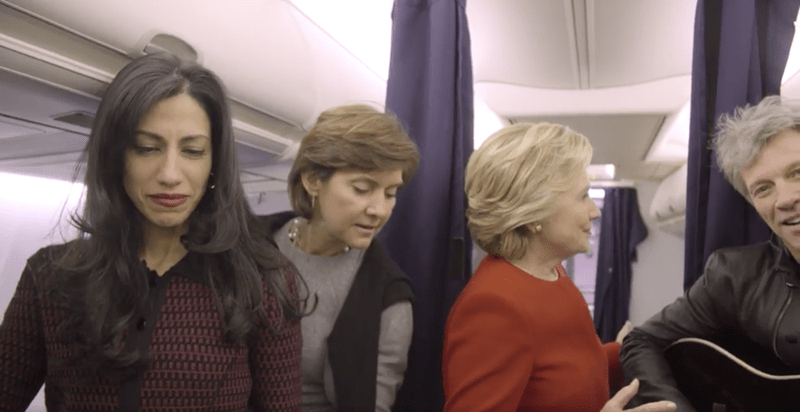 Following a delightful song and dance number between Late Show-host Stephen Colbert and an innocent ragamuffin, the mayor of Candytown himself, Jon Stewart, dropped in to offer the audience some “toffee from an old man’s pants.” But upon learning that Donald Trump is running for president, Stewart, who’s a little out of the loop these days, gave his patented spit-take salute in surprise. Time to get back to work… after a little Yentl, for which there is always time. 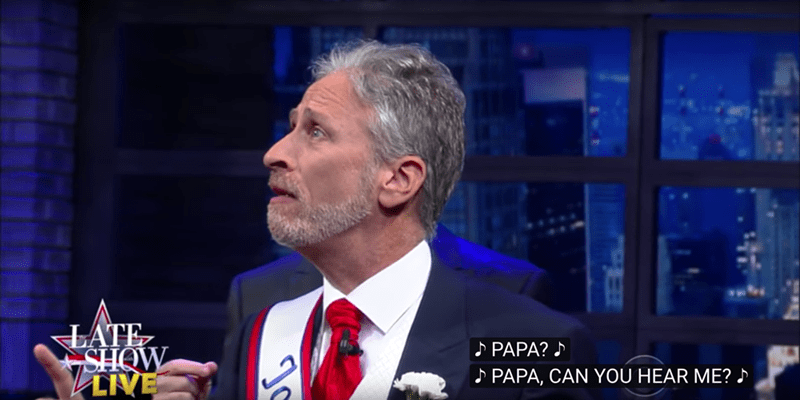 Hamilton's Javier Muñoz, an astronaut, a crossing guard, and, of course, an adorable orphan joined other classic symbols of Americana, Colbert, and Stewart on stage to remind the audience to get out and vote. Make this old man’s wish come true, America.

And now, what we’ve all been waiting for, gifs of people doing spit takes!

Binge Watch of the Day: SNL says “Goodbye” to Election 2016 and the Best Late Night TV of the 2016 Election

The election ends tomorrow, which means that late night TV is about to get a whole lot more boring (unless of course you're really in watching Channing Tatum play Twister — in which case, it’s about to become a whole lot more exciting). But that doesn’t mean we can’t have one final, hardy guffaw at the moments that defined these truly terrible and awful eight months.

Saturday Night Live closed out the election season with an awe-inspiring final debate between Kate McKinnon's Hillary Clinton and Alec Baldwin's Donald Trump, but what of the other great moments of this election cycle, the sketches and segments that kept up sane this past year?

From Jon Oliver’s blistering new nickname for Donald Trump to SNL's instant-classic “Black Jeopardy,” Wired has catalogued the best late night TV comedy of the year. Fall in love all over again with Jon Stewart popping in on Colbert and Jimmy Fallon tussling Donald Trump’s hair. We won’t believe it happened when it’s over, so revel in it all today. Check out Wired’s timeline of the sketches that defined the election here.

And to that we say, so long, Election 2016, you brought out the worst in all of us, and we’re happy to see you go. 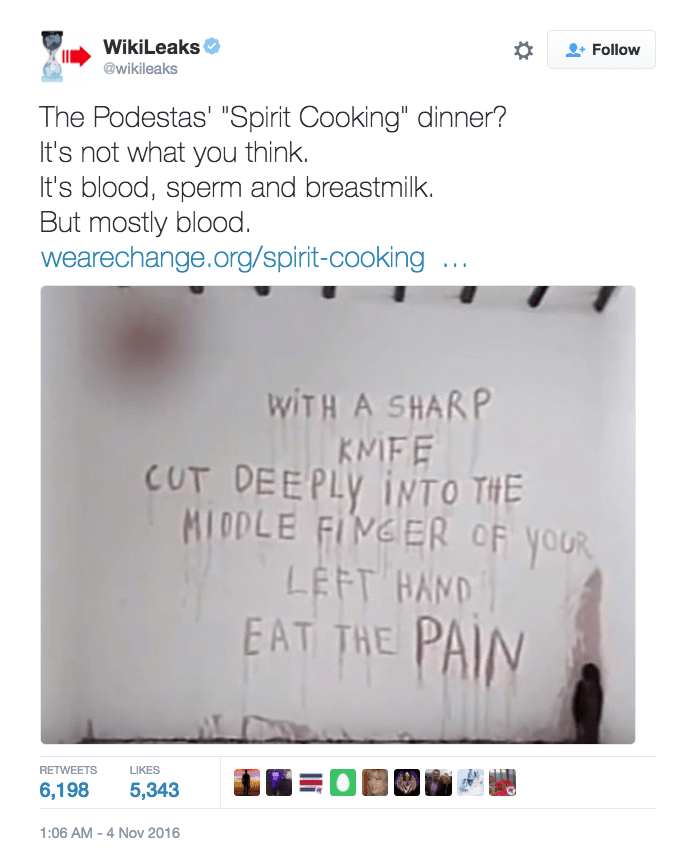