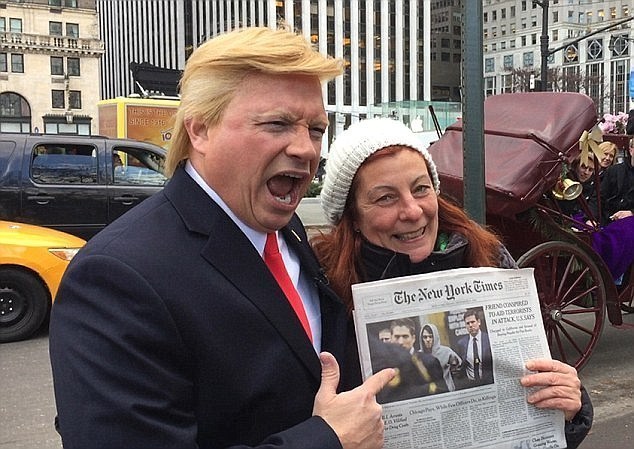 What do you do when the reality-TV game show host you impersonate wins the presidency? The same thing that happens when you win the presidency, you hire the Secret Service… sort of.

John Di Domenico, who spent the last 12 years impersonating Donald Trump, says that now that the president-elect has inspired so much rage and ire from some American citizens, he fears for his safety. So Di Domenico did what any other sane, rational Trump impersonator would do: He hired bodyguards.

Remember kids: Impersonating Donald Trump can have some unintended consequences, like being mistaken for Donald Trump.

However, even though he’s booked through the end of the year, Di Domenico’s appearances, which range from $3,500 to $10,000, have started to drop off. Apparently, now that Trump’s in the White House, people aren’t so eager to see him.

“It was really off the charts on the run up but now that he’s elected it’s like, okay, he’s not going anywhere,” Di Domenico told the New York Post. “There was this frenzy to book me, especially these last few months. A lot people thought he wasn’t going to become president.”

Will Trump promise to bring those jobs back, too? Only time will tell.

LA-based comedian Lauren O'Brien does some pretty spot-on impressions of famous women and how they would react in a traffic jam.
Here's a look at 14 of them from her Instagram series "Celebrities Stuck In Traffic," including Lois Griffin, Mindy Kaling, Anne Hathaway, Taylor Swift and Miley Cyrus.

Remember the Song Featuring 29 Impressive Celebrity Impressions? This is How Musician Rob Cantor Faked the Song

Here's the original video if you haven't seen it.

This Guy Does the Best Girl Voice Ever

Everybody's got a Christopher Walken, Jack Nicholson, and Woody Allen impression. How about you throw in a few impressions people don't usually do? Like Gwen Stefani and Shakira. How he pulled those off, I will never know.