Meanwhile in Russia of the Day: A Justin Bieber Ringtone Saved a Man From Being Attacked by a Bear

Just in case you thought there was no excuse for a grown man to have a ringtone of The Biebs, maybe this story of survival as reported by Elite Daily will change your mind.

No, the Biebs didn't do anything heroic. When Igor Vorozhbitsyn was en route to his favorite fishing spot in northern Russia's Yakutia Republic, he was attacked by a huge brown bear.

But then, his cell phone rang and the ringtone, "Baby," scared off the animal.

As the bear started clawing violently at Vorozhbitsyn, the Biebs' pre-pubescent vocals made the bear's ears bleed, and it ran off.

Wildlife experts believe it was the fact that the ringtone sounding off was so unexpected that it spooked the bear, but it's more fun to say the bear just really, really, hated that song.

Vorozhbitsyn suffers from severe bruises on his chest and face and cuts on his neck. Other fishermen found him after he was attacked, and used his phone to call for help.

Vorozhbitsyn says he knows the ringtone "isn't to everyone's taste," but it was his granddaughter that loaded "Baby" onto his phone "for a joke."

I think, however, that's just code for "I'm honestly just a true Belieber."

It didn't seem possible for Bieber to be even more of a douche, but alas...

You can see the original deposition video here.

Watch Justin Bieber Act Like a Disrespectful Jerk During His Deposition

TMZ has put together this excellent highlight reel of a recent 4 1/2 hour deposition hearing where the Biebs is being sued for allegedly ordering his bodyguard to beat up a member of the paparazzi.

The mashup includes all of Bieber's antics during the hearing which are likely to make your head spin. One of my favorite "arguments" he had during the hearing: "How could I ever be aware of something, knowing something? That's physically impossible."

Clever Analogy of the Day: How the Winter Storms in the US Are Exactly Like Justin Bieber

Bieber News of the Day: Justin Bieber is in Trouble With the Law AGAIN, This Time in His Native Canada 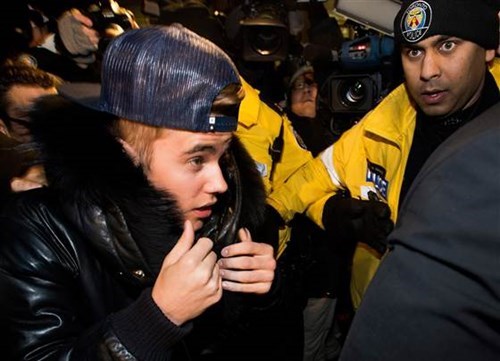 As in, after his Florida DUI incident. TMZ reports that the Biebs is in trouble with Canadian police stemming from an assault on a limo driver back in December. Toronto cops "wanted to speak" to Bieber about the incident, but in true Bieber fashion, the 19-year-old skipped out on an interview with them. After being informed that the police were getting increasingly annoyed at him, Bieber finally turned himself in on Wednesday afternoon.

Bieber will reportedly be booked on criminal assault charges, then released on his own recognizance. 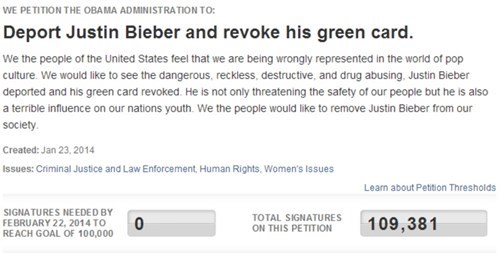 The day Justin Bieber was arrested in Miami a petition was created to deport Bieber and revoke his green card. Today, the petition has reached the 100,000 signature threshold which warrants a response from the Obama administration.

Don't get your hopes up, Bieber haters. There have been other responses to not so pertinent petitions which received 100,000 signatures such as this response about creating a Death Star.

Bieber of the Day: Congresswoman Interrupted for the Latest on the Justin Bieber Fiasco 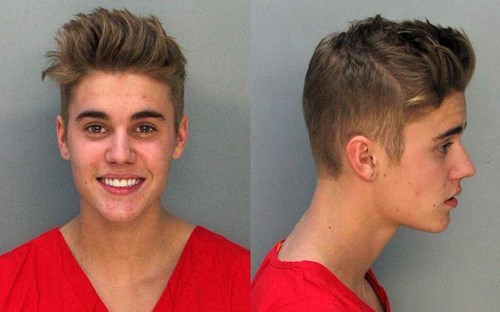 The Bieber legal troubles seem to be unending. While still embroiled in a civil suit for egging a neighbors house, the Biebs was pulled over early Thursday morning. Apparently, going 60 MPH in a 30 MPH zone is a crime, and of course the responding officers smelled alcohol and described him as in a "stupor". Sources have yet to confirm if additional drugs were a factor in his arrest. The 19-year-old is currently in holding while they test his blood for illegal substances and set bail. 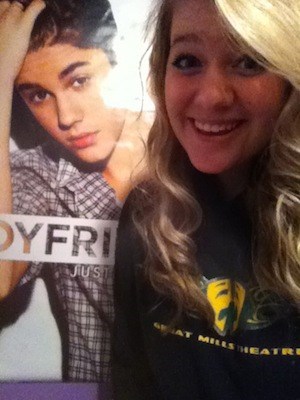 In the wake of the controversial hashtag #cutforbieber trending on Twitter this week, online women's magazine xoJane spoke with a 15-year-old Justin Bieber fan named Lianne, asking for her thoughts on the hoax. As someone who had struggled with self harm, Lianne wrote that it makes her sick to think an anonymous group of people would want to make young kids hurt themselves over liking a singer. She urged 4chan users to not only pick on someone their own size, but to think of their younger sisters or future daughters when concocting future hoaxes and reminded the posters that making a 15-year-old girl cry will never harm the Biebs himself. 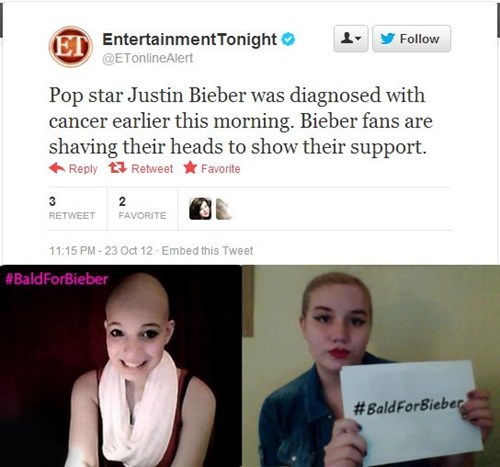 Via Blame It on the Voices
Repost
Recaption

Then: Beliebers began posting pics and vids of themselves with their heads shaved in a global show of support hashtagged #BaldForBieber.

Miraculously: The rumors were false and the Biebs is just fine, and now supposedly, a bunch of tweens have no hair.

Bieber's 'Boyfriend' Gets Even More Creepy of the Day

Justin Bieber Cover of the Day

A pleasant respite from many months of Call Me Maybe covers and Gangnam Style parodies, courtesy of violinist Seth Gilliard.

Check out his other work, including covers of Ellie Goulding, Frank Ocean and Usher. 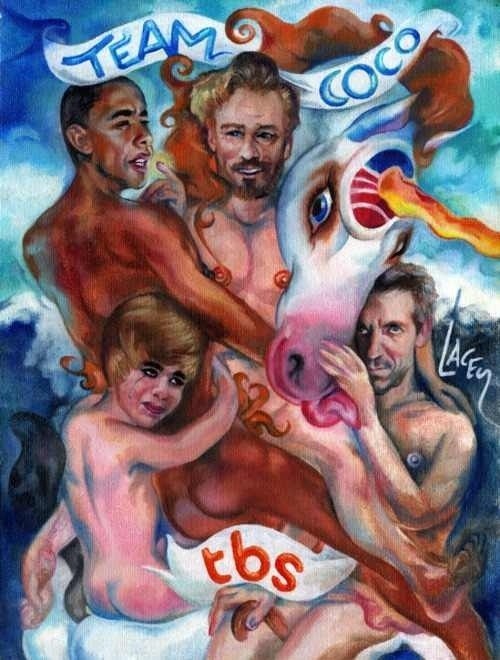 Obama and Bieber and Conan and House and... ew.

Mid-song at a Justin Bieber concert, the singer sharply transitioned into horking his guts up on stage.

What's the best way to prank your metalhead little brother? How about completely make over his room into that of a Bieber-loving teen girl?

Stick around for the reaction.