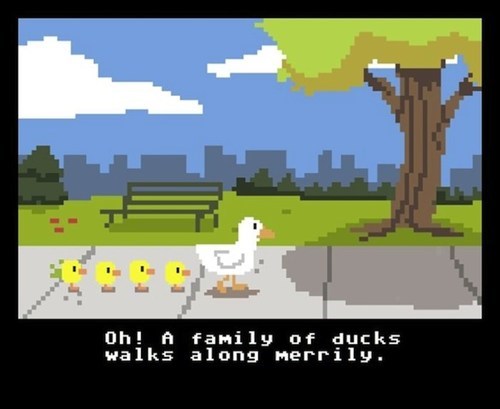 Introducing Duck Quest?, an 8-bit game with nary an explosion or special effect to be found:

Join a mother duck on her quest (?) to find her gale-scattered young 'uns throughout a city park. Along the way, she will meet a host of memorable pixelated characters, who may touch you with their heart-rending stories. However, the more likely response is a chuckle, or possibly even a guffaw.

The project is already fully funded at just $500, so watch for it online in early fall.

Shane Bitney Crone posted his devastating video of love and loss, "It Could Happen To You," online in May on the anniversary of his partner Tom Bridegroom's death.

Since then, it has been viewed more than 2.7 million times, and inspired some 50,000 comments on YouTube and Facebook.

Now it's just nine days away from receiving the funding needed to turn the couple's touching story into a feature-length documentary -- Bridegroom: An American Love Story.

That night, a couple of unforgettable young men named Shane and Tom joined my table. I learned they were Designing Women fans, madly in love and literally brimming with all their big plans for an exciting life together. Sadly, that possibility ended when Tom was killed in an accident last year. When I heard the news, I was haunted by the sheer weight of Shane's loss. Even though I barely knew them, their good-hearted demeanors and earnest love had made an indelible impression on me.

She saw Crone's video a few weeks ago and "was deeply touched. And angered. I called Shane [and] told him I wanted to make a documentary that would tell his and Tom's love story from beginning to end."

Alex Sutton, a combat veteran who did six tours in Afghanistan and Iraq, decided to fight for a life of purpose after losing his legs to an IED.

Together with his wife, Jessie, he's putting his new titanium legs to use as a farmer in North Carolina:

Since I was 17, all I've been doing is serving my country. And just because I'm hurt, doesn't mean I want to stop doing that.

Vittles Films, a young collective, is raising money via Kickstarter to tell his story. 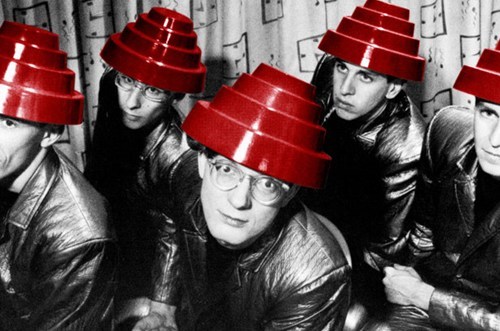 Four decades after "the band of the future" originated out of Kent State following the 1970 shootings, the first authorized documentary on the notoriously press-shy Devo is nearing completion. But the creators of Are We Not Men?, now in post-production, have turned to Kickstarter in order to meet their September 2012 goal for Sundance and other festivals.

Devo, perhaps best known for "Whip It," which reached No. 14 on the Billboard Chart in 1980, has maintained a cult following for 40 years. And the band hasn't slowed down -- their latest album, Something For Everybody, was released in 2010.

According to co-founder Gerald Casale:

We're like the house band on the Titanic, playing as the ship goes down.

The Summer Games are just months away, and the top goalball athletes are in full beast mode.

Originally created to rehabilitate World War II veterans, goalball is a fast-paced, high-impact Paralympic sport for the visually impaired in which competitors must rely on sound and touch to win.

A new documentary, the aptly named Shot in the Dark, captures the down-and-dirty as U.S. athletes train for nationals. Don't miss the trailer -- it's equal parts captivating and moving.

Sean Dunne, the creative genius behind short documentary films The Archive, American Juggalo, and The Bowler, is putting the finishing touches on his first feature film, Oxyana, about a small coal mining town in West Virginia that has been completely overtaken by Oxycontin. According to Dunne, "It's really f**king eye opening":

Oceana, West Virginia, sits squarely in one of God's blind spots. It's one of the old coal mining communities that feeds the nations insatiable appetite for energy. Set in the middle of unbelievable natural beauty, a beauty that in the last number of years, has been marred by the Appalachian scourge of Oxycontin. Life persists, but it's a living that few Americans could explain or even believe; closer in kind to the world of a medieval plague. Men and women die epidemically. The addicts— who are the vast majority, and all nice enough people— sell, scramble, and steal in an economy of nigh-endtimes desperation. Worn down and out by the pills, the mines, or the indignity of both, everyone is easily twice their own age, and unable to imagine an existence outside of coal, subsidies, and prescription narcotics. Things could hardly get darker— or more fucked and implausible— than in this place called Oceana.

This will no doubt be a tremendous film, and there's already a ton of buzz surrounding the project. Help "the master of fringe Americana" get it finished here.